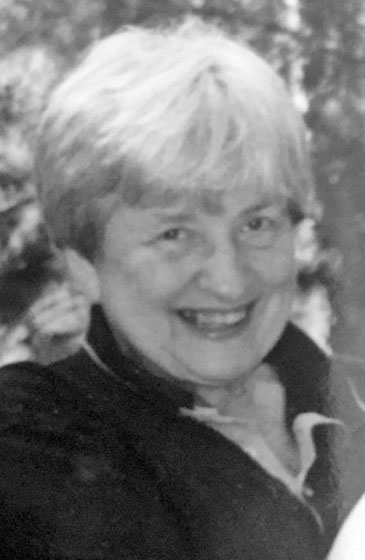 HARVEY, MI – Arlene E. Hill, age 84, of Harvey, Michigan passed into the arms of Jesus and into eternal life on Sunday evening, September 29, at the Norlite Nursing Center.

She was born in Chicago, Illinoi, on April 23, 1935, to William R. and Myrtle (Kniest) Hawkins. Arlene and her mother eventually moved to Sturgis, Michigan where she met her lifelong friend, Winnie (Walcott) Andrews, working at a Walgreens soda fountain. Arlene met the Lord in 1952 while attending Sturgis Bible Chapel. Arlene met her future husband, Kenneth I. Hill through Winnie’s brother Walt who brought him down from Upper Peninsula Bible Camp.

Arlene and Ken both pursued an education at Emmaus Bible School at Oak Park, Illinois and eventually married September 8, 1956. Their daughter, Elizabeth was born the following year and they moved to the UP two years later.

Arlene and her family lived in Munising and Christmas working at the township office and became involved with UPBC for many years. She and her husband helped to start the Little Lake Gospel Chapel and were members there for many years. They eventually moved to Gwinn, Michigan where Arlene worked at Forsyth Township and 1967 was the year that Kevin A. Hill became a member of the Hill family.

Arlene, with her family moved to Harvey in 1979 where they became members of Bethel Baptist Church and she served as a township clerk for the Chocolay Township. She enjoyed working with both local and state government activities and meetings. She participated on many local boards, became involved with Christian Women’s Club, Pioneer Girls, AWANA clubs, and other church programs. She loved the Lord and was very active in her work for Him.

Arlene is survived by her children Elizabeth Hill and Kevin Hill both of Harvey; grandson Geric King-Hill of Harvey; a sister-in-law Phyllis Hawkins of Ormond Beach, FL; a sister-in-law Evelyn (Hill) Hartman of Palm Coast, FL; and several nieces and nephews. She was preceded in death by her husband of 57 years, Kenneth I. Hill and her brother Roger Hawkins.

The family of Arlene wish to thank the Norlite Nursing Center staff for the many years of comfort, care, and friendship they have given. So many different caretakers of Arlene had cared for her that it is believed she taught all of us, grace and patience for caring for the elderly. She had many friends and was friendly to all. Thanks also to the doctors, especially Dr. Kroll, who also cared for Arlene as they listened to her heart and lungs and their expertise. Special appreciation to Arlene’s friends at the Little Lake Chapel and Bethel Baptist Church for the many years of friendship and ministry.

Last but not the least is thank you to our Lord and Savior for Arlene E. Hill and her ministry.

Services are to be held at Bethel Baptist Church Saturday, October 12, 2019. Friends may call at the church beginning at 9:00 am until the time of service at 11:00 am. Pastors Dr. Brian Oberg and Hank Steede will officiate. A reception will follow in the church fellowship hall.

In lieu of flowers, memorials may be directed to Bethel Baptist Church, 829 Grove Street, Marquette, MI 49855.

Fassbender Swanson Hansen Funeral and Cremation Services is serving the family, where condolences may be expressed online at fassbenderswansonhans en.com