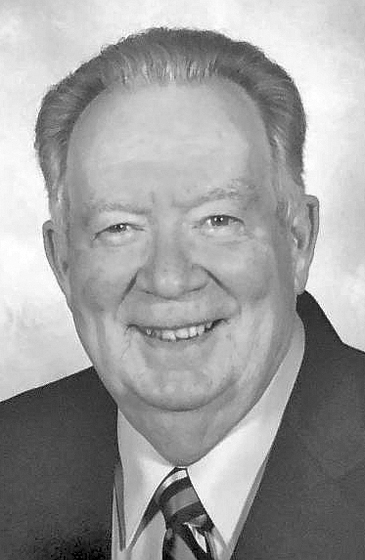 William was born in Ishpeming on September 7, 1932, a son of the late Muriel (Waters) and Leslie Lehmann. He was a graduate of the Ishpeming High School, Class of 1950. Soon after his graduation Bill went to work for Cleveland Cliffs on the Ore Boats in the Great Lakes mainly on the Champlain. Bill went on to work at the Mather B Mine while attending college at NMU from which he received his bachelor’s degree in education. Bill then taught Economics at the Ishpeming High School in the mid 1960’s where he had also served as the debate team coach. In the later 1960’s he returned to work for CCI this time as the Environmental Coordinator at the Main Office in Ishpeming, from which he retired after 30+ years with the company.

Bill had been a member at the Wawonowin Country Club where he had served as past-president, Ishpeming Elks, Negaunee Eagles and Camp Conibear Deer Hunting Camp. He enjoyed music and sang with local groups including the Choraleers and Allegro. Bill enjoyed his time serving Ishpeming Township as a Trustee for over 20 years.

The family will greet relatives and friends from 10:00am – 12:00pm on Saturday, Sept. 7, 2019 at St. Joseph Catholic Church in Ishpeming. A Mass of Christian Burial will be celebrated at 12:00pm on Saturday at St. Joseph Catholic Church with Fr. Ryan Ford officiating. Interment will take place at the Ishpeming Cemetery. A luncheon will follow the Mass in the Church Hall. Bill’s grandsons will serve as pallbearers.

Bill’s complete obituary can also be viewed at bjorkandzhulkie.com where relatives and friends may leave a note of remembrance.