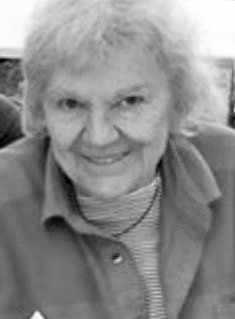 Born September 30, 1925, in Negaunee, the daughter of Charles and Sally (Sundeen) Engle, Nita was raised in Marquette and attended the local schools. She attended Northern Normal (now NMU) for a year, where she majored in art. Following her advisor’s advice that she could consider some career other than art, Nita moved to Chicago and enrolled in the Chicago Art Institute to pursue her lifelong passion of becoming an artist. Her family was very supportive of her decision and Nita finally gravitated, in her senior year, to doing watercolors. She apprenticed and began freelancing, first with a wallpaper company and then with a newspaper and ad agency where she became art director. Through all her jobs, she learned as much as she could and advanced in her knowledge and technique. She utilized every opportunity possible. Money was often scarce, but she managed to endure through her struggles. She entered some of watercolors in national shows and was noticed by the publishers of Reader’s Digest. She finally landed a job with Reader’s Digest as an illustrator. The job entailed traveling to various parts of the country to sketch scenes for their stories. Through her entering shows and her affiliation with Reader’s Digest, Nita began being recognized and received letters from Japan, Australia, and other countries. She was going from being a struggling artist to becoming a recognized watercolor artist. Soon, doors began to open for her and all kinds of opportunities presented themselves, including doing some work for Playboy. Over the years, she resided in New York, San Francisco, England, and Chicago for various lengths of time, traveled all over the United States, and conducted workshops around the world including Italy, Bali, Tahiti, and Africa. However, the place that captured her heart and soul was Lake Superior. In 1977, Nita returned to the Marquette area and set up a studio overlooking Lake Superior. Workshops continued in Marquette and Negaunee and countless students were given a whole new realm of expression through watercolors. Throughout the years with her work being recognized, fame grew, her work published, many awards came, and in 1969 Nita was inducted into the prestigious American Watercolor Society. In the 1940’s the art world was a male dominated field, so very early on Nita signed her work “N. Engle” so as to not disclose her gender. Over the years things changed and the struggling, much talented artist, left her mark. She received many honors and awards over the years, including induction into the American Watercolor Society, “Artist of the Year” in 1984, named Art Master by American Artist Magazine in 1996, Honorary Doctorate from Northern Michigan University in 1986, induction into the US ART’s Hall of Fame in 1997, and receiving the E. Scott Michigan Artist Prize for lifelong excellence and achievement.

Nita was preceded in death by her mother, Sally; father, Charlie; and brother, James C. Engle.

A Celebration of Life will be held at the UP Masonic Center on Monday, September 30, beginning at 3:00 pm. A program, honoring Nita’s life, will begin at 6:00 pm. This will be a time for the sharing of memories, conversation, and food.

Interment will be made in the Park Cemetery.