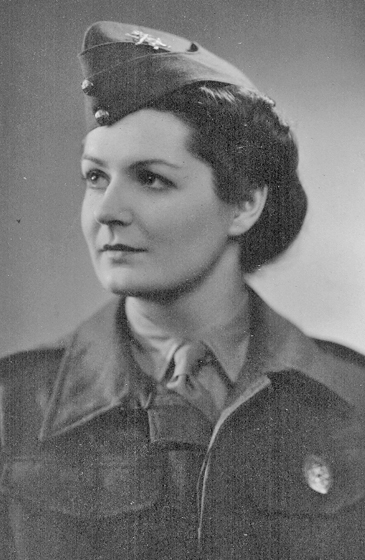 Born in Brussels, Belgium, Lydia was the daughter of Marcel and Annette Wael.

Mere weeks after graduating from the Ecole Superieure de Kinesitherapie and starting her first job in Ostend, Germany invaded Belgium in 1940. Lydia and about 100 patients were evacuated to England, ending up at the Birmingham (Royal Cripples) Hospital, where she worked as an aide. The Belgian Government in exile facilitated her studies at the physiotherapy school connected with the hospital, from which she graduated, becoming a member of the Chartered Society of Physiotherapy.

She worked in London at the Belgian Red Cross headquarters and participated in preparations to return home with the Belgian Military Mission. In 1943, she was stationed in Antwerp during the VI and VII attacks. Following the Allies liberation, she traveled through Germany to the concentration camp in Dachau to search for Belgian survivors and bring them home. For her war service, she was awarded the title of Chevalier de l’Ordre de Leopold II and the Belgian Croix de Guerre.

Following the war, she worked at the Brussels University Hospital in the children’s orthopedic department. In 1949 she received a Fulbright Scholarship to study in the US at Children’s Hospital in Boston, Massachusetts, where she worked with children with polio and cerebral palsy. There she met Peter Hoff. She returned to Belgium for a year to fulfill her scholarship commitments, and returned to the US to marry Peter in 1952 at his home in New Hampshire. She practiced physical therapy in several states to accommodate her husband’s career, finally moving to Marquette, Michigan in 1967 where she worked in long term and home care.

She fell in love with the Upper Peninsula. Although she travelled often, it always felt good to come “home”. She discovered the joy of cross country skiing and loved being outdoors. She attributed her longevity to good health, a positive attitude, exercise, and love of life. She was a dedicated environmentalist.

Lydia was a member of the Fulbright Alumni, the Sierra Club, the APTA, the AAUW, and the Century Club of Marquette.

She was preceded in death by her beloved son Carl and husband Peter. She is survived by her dearest daughter Isabel and precious grandchildren Thomas Edgell, Sarah Edgell and Dr. Catherine Edgell, her sons-in-law Wayne Francis and Matt Edgell, and her cousins in Belgium.

A celebration of her life will take place at St. Paul’s Episcopal Church on her birthday, August 22, 2019 at 5:30 pm. All those who wish to pay their respects are welcome.