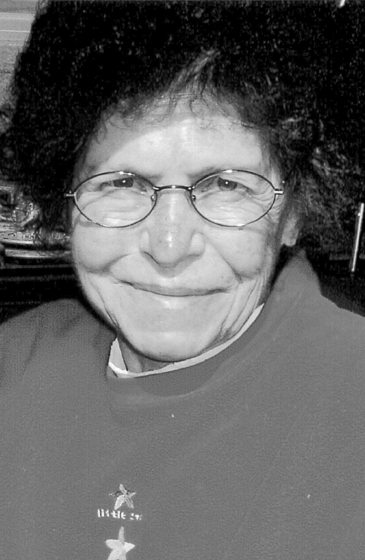 MUNISING, MI – Marvel McNally, age 87, of Munising, died early Saturday evening, March 10, 2018 at her home under the loving care of her family and North Woods Hospice.

She was born on April 25, 1930 in Munising to Frank and Zelia (Rivard) Lord. Marvel grew up in Munising and graduated from Sacred Heart School and then from Mather High School. While working at the Delft Theater during high school, Marvel met Wayne McNally. They were married and raised their family at their home in Frog Hollow. Marvel and Wayne were married fifty-five years when he preceded her in death in 2004. Marvel was a hard-working woman and was a talented seamstress which was a skill she learned from her mother. She worked for Valetta Leppamaki at Valetta’s Yarn and Yard Goods. The access she had to different patterns and materials allowed Marvel’s talents to shine. She made blazers for the Mustang Varsity Cheerleaders and her daughters were always well dressed by their mother’s creations. Marvel also worked for the State of Michigan as a 4-H Program Assistant, which was the job from which she retired. Marvel was completely devoted to her family and was a great homemaker. She could feed many on a few ingredients and she was a fabulous cook. Marvel washed astronomical loads of laundry for her son’s sporting events, was supportive of her family’s love for snowmobiling and racing, and she never missed a game, band concert or forensics play that her children participated. She was especially proud when her eldest, Lou Anne and other members of the Mather High School band were privileged to play on the South American. She was a faithful member of Sacred Heart Church and St. Girard Circle. Marvel was also a talented artist and enjoyed crafts. She would make Wayne cut out wooden characters and she would paint them by hand, her Peanuts characters were her most famous. Marvel also enjoyed blue berry picking and finding and collecting antique bottles in the area. She was proud of her family’s Native American heritage. Marvel was selfless, generous, and her priority was the happiness of others.

Visitation will be on Thursday, March 15, 2018 at the Bowerman Funeral Home from 5:00 until 8:00 p.m. with a Native American Service beginning at 7:30 p.m. followed by a Parish Vigil Service where there will time for sharing of stories and memories. Marvel’s Funeral Mass will be celebrated by Fr. Chris Gardiner at Sacred Heart Church on Friday, March 16, at 12:10 p.m. Interment will be at Maple Grove Cemetery in Munising. Marvel will be escorted by Tom Kusmerik, Everet McNally, Zach Eddy, Greg Peterson, Greg Beatty, and Greg Pond.

Marvel’s obituary and online guestbook may be viewed and signed at bowermanfuneralhome.