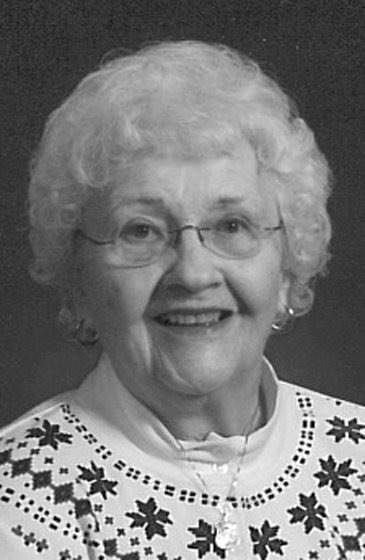 Born in Jackson, Michigan, on October 14, 1928, a daughter of John and Mary (Pec) Vincent, Betty was raised in Jackson and graduated from Jackson High School. For a time, she was employed with Aeroquip Corporation in Jackson, a company specializing in manufacturing fluids and gauges for aircraft. On February 20, 1954, Betty was united in marriage to Warren Smith and together the couple made their first home in Jackson and began to raise a family. In 1958, Warren was transferred to Upper Michigan as alternate pilot at the Michigan State Police Post. Had it not been for the transfer, Betty remarked she might never have left Jackson for the wilds and snow of the UP. Betty balanced her duties of wife, mother, and homemaker with volunteering. Throughout the years, she helped train Brownie and Girl Scout leaders, served as volunteer secretary for the Lions Club Eye Bank for Marquette General Hospital, and served on the Chocolay Election Board and took census. She also found time to be an Avon representative for many years and was a cashier at the original Marq Restaurant, a temporary employment that turned into a stint of several years. Back at home, Betty enjoyed all sorts of craftwork, especially crocheting. She was known for her beautiful doilies, afghans, and other creations which she often gifted to family and friends. She was a talented cook and husband, Warren, on his flights back from Lansing would often fly over the house to remind her to start supper. She enjoyed working crossword puzzles and reading the Detroit paper front page to last. Betty was a Past Worthy Matron of Presque Isle Chapter 403 Order of Eastern Star, a member of Daughters of the Nile, a member of the Federated Women’s Club where she served as toastmistress, and member of St. Louis the King Catholic Church in Harvey. She had a full life, filled with family and friends, and “lived life on her own terms”. Kind and giving, she also possessed a determined spirit filled with lots of patience.

In addition to her husband, Warren, Betty was preceded in death by her parents; a son-in-law, Richard Rintamaki; sisters, Joann (the late Harry) Thrash and Marylin Fisher; and her brother, John Vincent.

The family would like to express their appreciation to Hildia Ball, longtime friend and caregiver, the staff of Norlite Nursing Center, Dr. Cassie Bluhm, and the caregivers of Lake Superior Hospice for their compassionate and professional care of Betty and for the many kindnesses they extended to the family.

In lieu of flowers, memorials may be directed to the Activity Fund at Norlite Nursing Center, 701 Homestead Street, Marquette, MI 49855.

The family will receive relatives and friends at St. Louis the King Catholic Church in Harvey on Saturday, March 17, beginning at 10:00 am. A Mass of Christian Burial will be celebrated at 12 noon with Rev. Glenn Theoret, pastor, as celebrant and Deacon Scott Jamieson assisting. Honorary pallbearers will be Eric Rintamaki, Joshua Adediran, Chad Shaw, Nick Shaw, and Matt Shaw. A reception will follow in Father Gauthier Hall. Spring interment will be made in the Park Cemetery.

The Swanson-Lundquist Funeral Home is serving the family, where condolences may be expressed online at swansonlundquistfuneralhome.com