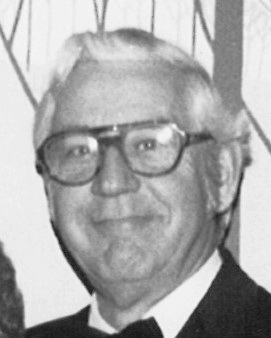 Bill was born in Perkins on May 26, 1928, son of Adelore and Nellie (Brouse) Gerou. He was raised in Perkins where he worked on the family farm. On July 8, 1950, Bill married Rosalind Brassick in Gladstone. They were married for 53 years.

He worked for Canteen Vending service for twenty five years as a service man and also at Escanaba Moving Systems. He retired May 1, 1990.

Bill was a member of St. Anne’s Parish where he ushered for many years. He was a proud member of the Knights of Columbus, where he was a 3rd and 4th degree member. He enjoyed volunteering at St. Vincent de Paul and going to the family hunting camp. Most of all, Bill loved spending time with his children, grandchildren and great grandchildren.

Bill was preceded in death by his parents, and sisters, Charmaine Gerou and Lorraine Babcock; and son in law, Dennis Moyle.

Visitation will be held on Friday, May 18, 2018 from 10:30 a.m. to noon at St. Anne’s Church in Escanaba. Knights of Columbus Rosary will be said at 10:30. The Mass of Christian Burial will be held at noon with Rev. Fran DeGroot officiating. A luncheon will follow in the fellowship hall.

Burial will take place later that afternoon at Gardens of Rest Cemetery.

In lieu of flowers, memorials may be directed to St. Vincent de Paul.