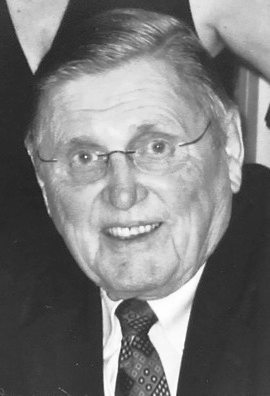 Robert was born April 14, 1928 in Marquette to Alvin R. And Sadie I. (Guelff) Koskey and graduated from Negaunee St. Paul High School, Class of 1945. After graduation, he enlisted in the United States Navy and served until being honorably discharged as a Seaman First Class in January, 1947.

Following his service to his country, Robert attended Northern Michigan University for two years and then earned his Mortuary Science Degree in 1950 from the Wisconsin Institute of Mortuary Science before joining his Mother in operating the family business. He owned and operated Koskey Funeral Home from 1962 until his retirement. Robert was a 68 year licensed member of the Michigan Funeral Directors Association and National Funeral Directors Association.

Mr. Koskey was an active member of St. Paul Catholic Church, Negaunee where he served on the St. Paul School Board, the Parish Council and the St. Paul Endowment Fund Board. He was a lifetime member of the Knights of Columbus and American Legion and was an original member of the Negaunee Housing Commission.

Robert was devoted to his family. He was an avid Negaunee Miners fan and enjoyed watching his children and grandchildren throughout their academic and athletic careers. Robert and his wife enjoyed wintering in Florida and spending time with family and friends, especially at the family camp in Three Lakes.

He was preceded in death by his parents, his wife, Rena (Juidici) Koskey, on December 27, 2015, brother-in-law, Vincent ‘Pancho’ Villa; along with numerous other brothers- and sisters-in-law.

A Mass of Christian Burial will be celebrated at 4:00 pm on Tuesday, January 23rd at St. Paul Catholic Church with Monsignor Peter Oberto officiating. Burial will be in the Negaunee Cemetery. The family will greet relatives and friends from 1:00 pm until the time of Mass at 4:00 pm at the church on Tuesday, and also at a dinner reception in the St. Paul Gymnasium following Mass. Robert’s grandsons and Jeff Rogers will serve as pallbearers.

In lieu of flowers, memorial contributions may be directed in Mr. Koskey’s memory to the St. Paul Endowment Fund or the Robert and Rena Koskey Scholarship Fund at the Negaunee High School.

Mr. Koskey’s memorial page may be viewed at koskeyfuneralhome.com, where memories and condolences may be shared.