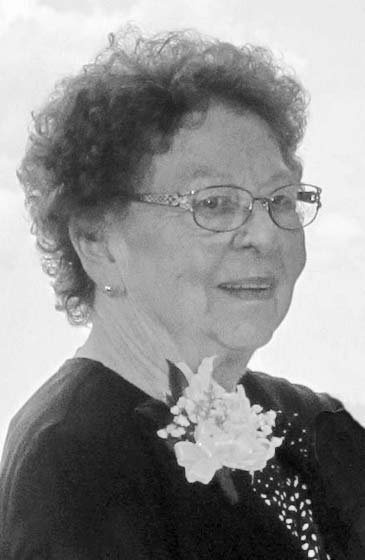 She was born on November 1, 1934 in Eben Junction to Andrew and Marie “Mary” (Myllyla) Salmi. Cindy was a lifelong resident of Eben. She was raised on the family farm where everyone helped with the milking while her dad ran the grocery store, A. Salmi Mercantile. She graduated Valedictorian from Eben High School in 1952. Cindy married Raymond Eugen Niemi on June 7, 1952 and together they raised their four children. She was a homemaker and worked briefly at Munising Memorial Hospital before going to work at the Rock River Township School. Cindy retired from Superior Central School in 1993. She was involved with Home Extension groups and enjoyed knitting with the “Knotty Knitters Club”, baking, and working crossword puzzles. She enjoyed Detroit Lions football and Tigers baseball. Sunday dinners at her home were a weekly tradition that kept her family close and taught them old fashion values. Cindy is survived by her four children- Steven Niemi of Forest Lake, Donna (Henry) Lampi of Escanaba, Kathleen (Daniel) McDonough of Manistique, and Robert (Lori) Niemi of Manistique; grandchildren – Max (Cora) Fisher, Joseph (Brynn) Fisher, Marissa McDonough, Rory McDonough, Charles (Casie Hough) Niemi, Craig Niemi, Daniel Niemi, Beth (Eric) Gurnoe, and Niki Jo Walters; great-grandchildren Raine, Aurora, Tymber, Max II, Fiona, Keira, and Kenzie; brother – Oswald Salmi; and numerous nieces and nephews.

Visitation will be at the Bowerman Funeral Home in Munising on Wednesday, March 29, 2017 from 11:00 a.m. until 1:00 p.m. Pastor Paul Kelto will conduct Cindy’s funeral service at 1:00 p.m. Interment will be at the Pine Grove Cemetery in the spring. Memorials in Cindy’s name may be made to the Superior Central Schools. Her obituary and online guestbook may be viewed and signed at bowermanfuneralhome.net