Jimmy Bleau outside the family home on Maple Street. (Photo courtesy of the family of Elaine VandeZande)

Jimmy Bleau in the hospital in Oakland, California. (Photo courtesy of the family of Elaine VandeZande) 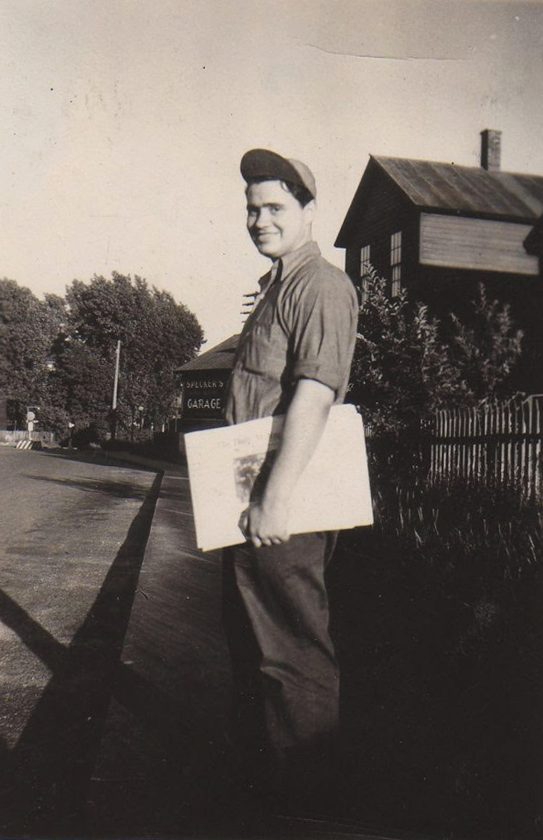 Jimmy Bleau outside the family home on Maple Street. (Photo courtesy of the family of Elaine VandeZande)

MARQUETTE – Over the years there have been monuments erected and memorials built for Marquette residents who have died fighting for their country. The name of one of Marquette’s biggest war heroes, though, is not on them.

Calvin “Jimmy” Bleau was born in Detroit in 1926, the son of Charles and Maude Bleau. When Jimmy was 5 the family moved to Marquette, occupying the only home that sat on Maple Street (which is now the Pathways parking lot by the Marquette City Commons). Jimmy attended Graveraet High School, and when World War II began was working at an area farm as a truck driver.

Jimmy enlisted in the Marine Corps in October of 1943, having just turned 17. Following training at Camp Pendleton he was sent to the Pacific as a rifleman, seeing his first action on the Palau Islands before being sent into one of the bloodiest battles of the war, Iwo Jima.

Jimmy was among the thousands of Marines who stormed the island in February of 1945. They were still fighting almost a month later when on March 11 his company was pinned down by withering crossfire from enemy machine guns firing from pillboxes. He armed himself with an anti-tank rocket launcher and attacked and destroyed two enemy pillboxes. While constantly exposed to heavy machine gun fire, he continued along the line and destroyed three more of gun enemy emplacements. As he attempted to close on yet another pillbox he was very seriously wounded by shell fire.

His injuries were severe. The shell took out part of his skull, causing major head injuries. After being sent to a military hospital he was fitted with a metal plate in his head to protect his brain. In addition, his right side was paralyzed and his speech was affected. He was sent back to the States where he underwent several further medical procedures, and was award a plethora of military commendations, including two Purple Hearts, the Legion of Valor Medal, and the Navy Cross. 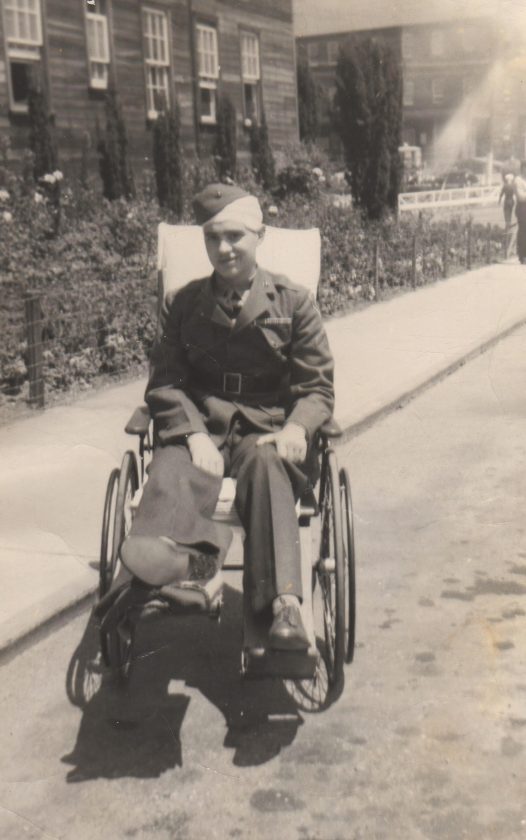 Jimmy Bleau in the hospital in Oakland, California. (Photo courtesy of the family of Elaine VandeZande)

After a year, Jimmy returned to Marquette, where he was greeted by friends and community leaders. His late sister Elaine, even though she was only 5 at the time, recalled the damage that his injuries had caused. “Words were slow to come and sometimes difficult to understand. Family members got used to his broken English and soon were able to decipher what he meant.”

Despite his limitations, though, Jimmy did have a dream. According to a Mining Journal article from 1946, “Ever since he has been in the hospital, there is one thing that he wants…a car that will make it possible for him to drive out into the country, to move about as other persons do.” The community responded, giving him enough in the way of gifts and donations that he was able to purchase a new Cadillac, which was the delivered to the family.

As his late sister Elaine would recall with a laugh, “Here we were living in a tar-paper shack with a brand new Cadillac siting in the driveway”. Although it was rarely driven, Jimmy would like to get behind the wheel on occasion, his physical and mental limitations notwithstanding. One Marquette resident remembers what would then happen — “His family would call the police, and they would send a couple of cars over. They would then drive ahead of him, clearing the streets ahead of him to make sure he wouldn’t hit anyone or anything. When he was done, they’d make sure he and the car were returned to Maple Street safely.”

Despite everything that had happened to him, Jimmy still remained a beloved member of the community. His daily routine included a walk over to the Central Cafe, which sat on South Front Street just a few blocks from the family home. There he would enjoy his drinks and the company of friends and admirers, and indulge in another favored pastime. Jimmy would pull out a ring he carried in his pocket and propose to his favorite female patrons, one each visit, with the ring always safely returned to his pocket by some Good Samaritan at the bar.

Over the years, though, his war injuries took their toll. He suffered seizures rather often and his physical condition began to weaken. Compounding this, the metal plate in his head began causing him headaches, and was eventually removed. This left him vulnerable to any sort of accident, and a fall sent him to the hospital on Aug. 22, 1959, where he died two days later, 14 years after his heroics on Iwo Jima.

Jimmy was buried in the family plot at Holy Cross Cemetery, where it’s noted that he was wounded at Iwo Jima. In the past few years, his name was also placed on a brick at the Marquette Veterans Memorial at Harlow Park.