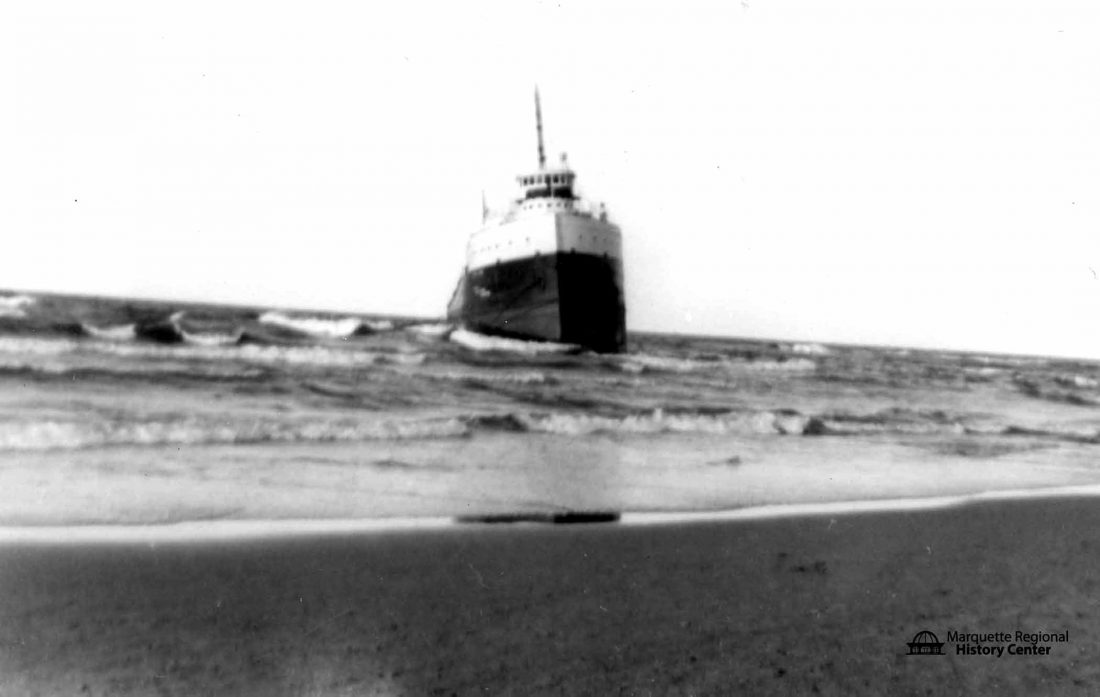 The SS Maryland is pictured aground in September 1953. (Photo courtesy of the Marquette Regional History Center)

Some historical changes happen slowly, unnoticeably. Other times we can identify an exact moment of change. One of those changes came on Sept. 12, 1953, when an ore boat, the S.S. Maryland, ran aground east of Marquette between Lakewood and Gordon, near the current Ojibwa Casino.

Built in 1908, the vessel was 530 feet long, had a 56 foot beam and was 31 feet deep. Originally named the James Corrigan, it was renamed the Arthur E. Newbold in 1916 and then acquired the name Maryland in 1925. It had departed Ashtabula, Ohio on Sept. 10 and was due at the Lake Superior and Ishpeming dock at Presque Isle in Marquette at 5 a.m. on the 12th to take on a cargo of 10,900 tons of iron ore.

During a storm, the ship ran into rough waters on the west side of Grand Island and issued its first distress signal at about 7 a.m., reporting that most of the vessel’s hatch covers were loose with two blown off entirely and that there was some water in the cargo hold. After struggling for several hours, the ship ran aground around 9:50 a.m. Ten minutes later, unable to free the ship, Capt. A. P. Goodrow requested the U.S. Coast Guard’s help in removing the crew.

The breeches buoy is a rope-based rescue device. Men on shore would shoot a line out to a ship using a Lyle gun, which was a small cannon designed to fire a projectile attached to a rope. Once the rope line was established, it operated like a zip line. A single person would climb into the device, which resembled a round emergency personal flotation device with a leg harness attached, and the person being rescued would then be pulled to shore in the buoy.

On the first attempt to reach the sailors on the Maryland, the line fell short so they used a heavier charge of powder in the Lyle gun which finally reached the vessel. They were able to rescue 21 of the 32 crewmembers using the breeches buoy before the line snapped.

With that failed rope, the Maryland incident became a turning point. In addition to reportedly being the last rescue on Lake Superior to use the breeches buoy, it turned out to be the first rescue by helicopter on the lake. The remaining eleven sailors were picked up by a Coast Guard helicopter based out of Traverse City.

Once ashore, the men were given refuge at Joe Harrington’s nearby camp, with the prison supplying hot food and dry clothing. The men were then taken to the Hotel Northland to recuperate from their ordeal. Some attended the movies while others returned to the beach along with thousands of gawkers from town.

A Marine Board of Inquiry later found that while the captain was not negligent or criminally at fault, he had not exhibited prudent seamanship or the best judgement. They recommended that he “be admonished for his unskillfulness in: a) failing to attempt to back into the wind and sea, b) failing to take shelter at Munising when the opportunity to do so existed, c) maneuvering his vessel in severe weather, d) failing to maintain a proper plot of the position of his vessel, and e) failing to use the anchors sooner with full scope of chain.”

The SS Maryland was refloated just five days later on Sept. 17, 1953, with the assistance of the salvage vessel Favorite and the Coast Guard Cutter Mackinaw. It proceeded under tow and escort to Superior, Wisconsin, where it underwent extensive repairs, rebuilding “practically her entire bottom structure.” Relaunched under the name Henry LaLiberte in 1954, the vessel sailed for the Buckeye and Kinsman lines.

On Oct. 27, 1973, the LaLiberte struck an embankment while backing from the Frontier Dock Slip at Buffalo, New York, and damaged the steering gear beyond repair. We assume that it was scrapped after this incident as we were unable to locate additional information on the vessel.