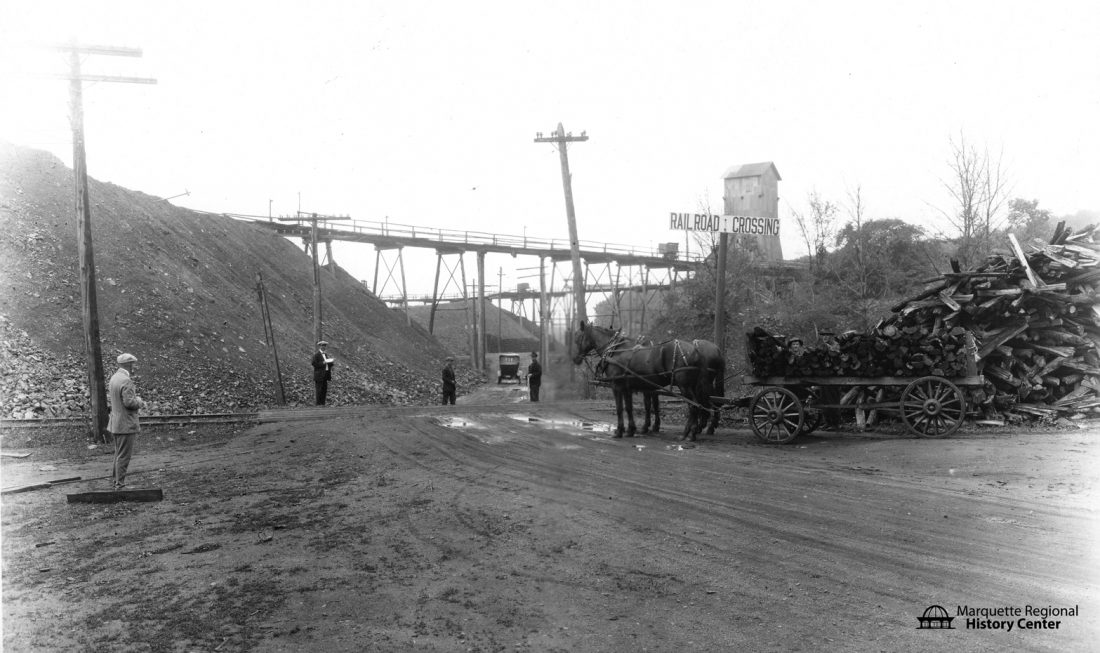 The Rolling Mill Mine, circa 1918. (Photo courtesy of the Marquette Regional History Center)

Editor’s note: This article was adapted from one that was originally published in the USW Local 4974’s The Miners’ Voice, August 1982

NEGAUNEE — Last week’s article described a free-falling mine cage at the Rolling Mill Mine in Negaunee on Sept. 20, 1907.

Several of the victims were trapped below the waterline at the bottom of the sump, and the rescuers worked desperately to reach them, perhaps knowing full well that the entangled mess would make it impossible to save them in time.

While the rescue work was going on in the mine, word was sent to the Negaunee Hospital that a terrible catastrophe had just occurred and all available help would have to be sent to the site at once. News of the disaster spread through the streets of Negaunee like wildfire, and the wives and families of miners who worked at the mine raced to the site.

Meanwhile, at the bottom of the shaft, it took a considerable amount of work to free the trapped victims, and despite the frantic pace of the rescue effort, it was nearly an hour before the first injured miner was finally brought to surface on the skip.

As the victims were taken up, the people on surface finally got a firsthand view of the appalling results of the accident as the severely injured survivors and the mutilated corpses of the dead were carried from the skip into the dry house. There, the injured were attended to by the staff from the Negaunee Hospital, while the dead were prepared to be sent to Dawe’s morgue back in town.

Within a couple of hours, the list of dead miners climbed to ten when William Hyranen died from massive injuries.

Of the six remaining miners, Sam Stevens, Alfred Jewell and Tom Roberts were listed in a condition which at that time was termed as “probably fatal,” each having suffered from a broken back. Two of the other victims, John Makki and John Koivisto, each suffered internal injuries, with Koivisto also having both hips broken. Both miners were given little, if any, hope for survival.

Miraculous as it may sound, the one remaining miner, George Sabastino, was treated and released from the hospital with only minor injuries.

According to an account in Negaunee’s Iron Herald, “Sabastino had the presence of mind to cling to an iron rod in the upper part of the cage and drew his feet up from the floor.” The paper goes on to say that “this lessened the shock and he is the least injured.”

The list of dead continued to grow as Alfred Jewel finally died from his injuries on Oct. 6. After that, the records become very unclear as to how many of the others ever recovered from their injuries.

Despite escaping physically, George Sabastino’s mental health suffered following the incident. In the initial days afterward, he was able to give a coherent account of the catastrophe but when sleeping he would often scream. Within three weeks he “lost his reason” as his mental state deteriorated. He was described as “talking a good deal in a rambling way about the runaway cage and the incidents that followed the crash.” Later reports indicated that while his legs were bothering him, Sabastino was improving and was “not expected to be incapacitated for work.” It was anticipated he would to return to work by mid-November, two months after the accident.

However, one thing is clear. Except for Sabastino, the rest of the survivors all suffered from their crippling injuries to their final dying days. In all, the accident left eleven dead miners, nine widows, and fifteen penniless families.

Immediately after the accident occurred, an investigation was conducted by the company to determine what had caused the cage to plunge 643 feet to the bottom of the shaft. After the inquiry, it was claimed that the hoisting “machinery had not the slightest hint of any unsafe features.”

The company stated that their master mechanic had just, a few weeks prior to the accident, inspected the machinery and “all was in perfect condition.” They added to their report that “the hoisting apparatus was checked a few hours after the accident” and astonishingly “it was working properly.”

When the verdict from the coroner’s jury was finally read in Negaunee on October 3, no blame whatsoever was placed on the mining company which owned the mine.

The verdict simply stated that “while the cage was descending into the Rolling Mill mine shaft on Sept. 20, 1907, the brakeman in charge of the hoisting machinery, in some manner or means unknown to this jury, lost control of the hoisting mechanism and said men were plunged to the bottom of the shaft, the shock of which caused their death.”