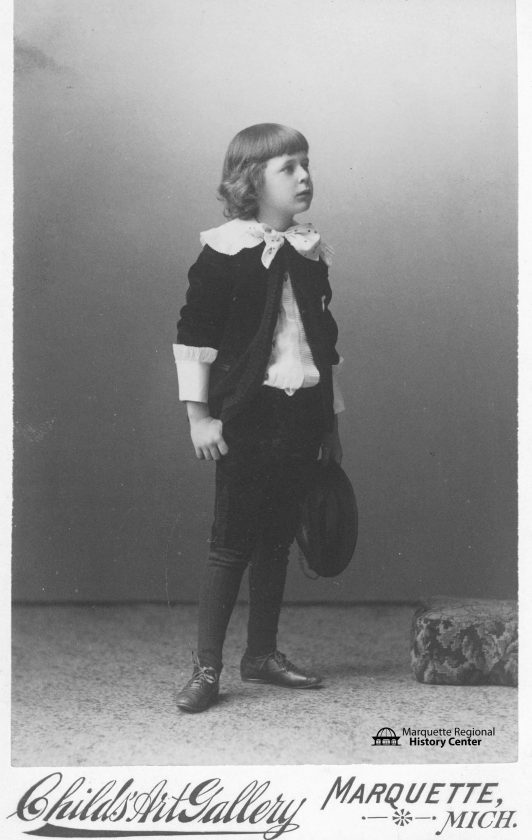 MARQUETTE — Alfred Vincent Kidder was one of the most influential archaeologists of the twentieth century. During his lifetime he was regarded as the preeminent American archaeology scholar. Specializing in prehistoric cultures of the southwestern United States, Kidder pioneered the use of stratigraphy, the study of layered materials deposited over time, and led the movement to establish standardized dating terms for the Pueblo culture.

Most people do not know that he was born in Marquette.

Kidder’s father, also named Alfred, came from Boston to Marquette to pursue his career as a mining engineer with local iron mining companies. He married Kate Dalliba, from Chicago. Alfred Vincent Kidder, the youngest of three sons, was born to the couple on Oct. 29, 1885.

As boys, the Kidder brothers were fascinated with the writings about Native American cultures collected in their father’s library. They read North American Indians by artist George Catlin, the publications of the Bureau of American Ethnology, and articles about North American indigenous peoples compiled by the Smithsonian Institute.

Though they moved back east, to Cambridge, Massachusetts, when Alfred Vincent Kidder was a boy, their time in the Upper Peninsula influenced the Kidder brothers. The boys’ father worked as a guide in Marquette County for eminent anthropologist Lewis Henry Morgan. As children, the boys hunted arrowheads with their father, who submitted artifacts found in the Dead River area to the Peabody Museum at Harvard.

The boys were eager to learn about local Ojibwe culture. Alfred V. Kidder’s older brother Homer crafted a bust of Charlie Kawbawgam that we still have at the Marquette Regional History Center, and studied Ojibwe folklore from local Native American elders. Homer Kidder’s compilation of folklore from interviews with Charlie and Charlotte Kawbawgam and Jacques LePique was published as Ojibwa Narratives.

Abby Roberts, daughter of Marquette businessman J.M. Longyear, recalled that she and her sister Helen Paul kept up correspondence with Alfred and Homer Kidder well into their advanced years. The Longyear children were dear friends of the Kidder brothers, who used to drive them around the neighborhood in their family’s carriage when they were neighbors in Marquette.

Abby Roberts and Helen Paul kept abreast of the latest archaeological theories through letters from the Kidders. Since the sisters were centrally involved with the Marquette County Historical Society, now the Marquette Regional History Center, our institution has long maintained a strong interest in archaeology.

Young Alfred began his undergraduate career at Harvard preparing to become a medical doctor but did not particularly care for the coursework. In 1907, his junior year, he took advantage of an opportunity to work with well-established archaeologist Edgar Lee Hewett in the Four Corners region. After this experience, he chose a career studying the prehistory of the Southwest. In 1914, Alfred V. Kidder became one of the first people in the United States to earn a PhD in archaeology.

Soon after obtaining his doctorate, Kidder was hired by Phillips Academy of Andover, Massachusetts to lead fieldwork at Pecos, New Mexico. Over the next 15 years, Kidder meticulously documented artifacts from of the Pueblo culture. He used the newly popularized stratigraphic method to reconstruct the history of the Pecos site, inhabited from the 1200s to 1838. In 1927, Kidder hosted ethnologists and archaeologists at a conference at Pecos that standardized dating terms for Pueblo culture.

Kidder was hired by the Carnegie Institution of Washington in 1929. He conducted archaeological investigations in Mexico, Guatemala, and Peru in the last decades of his life. When he died in 1963, Alfred Kidder was remembered as an inspiration to future generations of archaeologists. In fact, his own son, also named Alfred, became an important South America archaeologist and his grandson, Tristram Randolph Kidder, is a professor of anthropology and environmental science at George Washington University in St. Louis to this day.

As we complete our 101st year of operation, the Marquette Regional History Center celebrates our institution’s commitment to archaeology by promoting interest in uncovering our region’s deep past. As an homage to the great prehistorian born in our city, it is our intention to do as Alfred V. Kidder did and help inspire a new generation of archaeologists.

We will host a special traveling exhibit from Oct. 7 to Dec. 28 about glacial archaeology. This exhibit highlights emerging work using archaeological evidence in conjunction with geological and biological data to understand climate history in Alaska. We will include fascinating information about archaeological finds in the Upper Peninsula and explore the ways that shifting climate shaped local settlement patterns in our region.

The Marquette County community is invited to the opening reception for this special exhibit on from 5 to 7 p.m. Oct. 16 The co-creator of the exhibit, University of New Mexico Professor E. James Dixon, will join us to answer questions about the decade of research that went into this project.

Archaeology aficionados of all ages are also invited to attend our annual Archaeology Fair, from noon to 3 p.m Oct. 19. at the history center, 145 West Spring Street in Marquette. Subject matter experts will host booths about specific topics in archaeology.