History at Pine and Ridge

The second Marquette High School was located on the corner of Pine and Ridge streets. It was completed in 1875. (Photo courtesy of the Marquette Regional History Center) 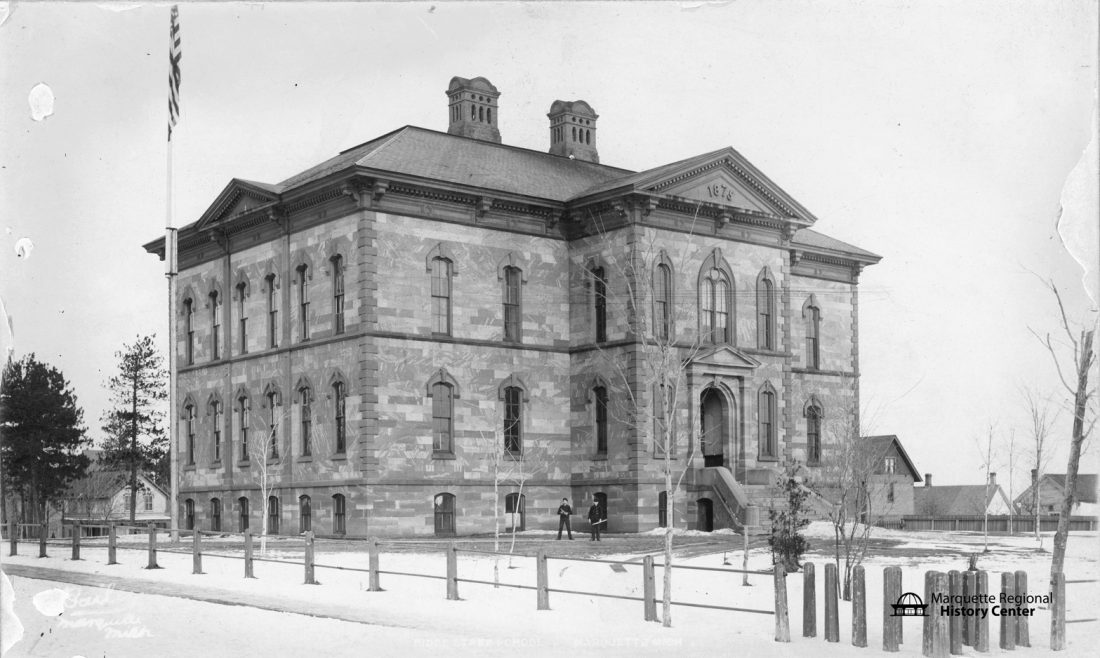 The second Marquette High School was located on the corner of Pine and Ridge streets. It was completed in 1875. (Photo courtesy of the Marquette Regional History Center)

MARQUETTE — The fire at Pine Ridge Apartments this past week was not the first fire at that site, although luckily in both fires no one was injured. The location has a long history, serving as the home for three separate high schools over the span of 100 years, including one that burned down in 1900.

The story that led to Pine Ridge Apartments began when the lot was designated for the first Marquette high school in 1859 on land northeast of the village.

The property was donated by Morgan Hewitt, physician and first president of the Cleveland Iron Mining Company. At the time citizens voiced concern that the wooded acreage was located in the wilderness. Parents did not want their children walking so far from home. (The first home in the area would not be built until the mid-1860s.) Regardless of concerns, the community built the high school on the corner of what would become Pine and East Ridge streets, and it opened in 1860.

It was a two-story structure built of red brick with separate entrances for girls and boys. Wood to heat the school was chopped by the boys in a shed behind the school. Eventually a few homes were built near the school, however, everything north of Ridge remained forest. This led to classes occasionally being interrupted by gunfire from hunters.

In 1873, the need for costly repairs to the first school and an increase in enrollment necessitated a new building. Completed in 1875, the new two-story structure was doubled in size. It was built with sandstone from the Marquette Brownstone Company and had beautiful porticos of carved stone. It housed both high school and elementary classrooms, with four elementary rooms on the first floor and a large high school room, four recitations rooms, a library, and the principal’s office on the second. The basement housed the water closets and boilers. 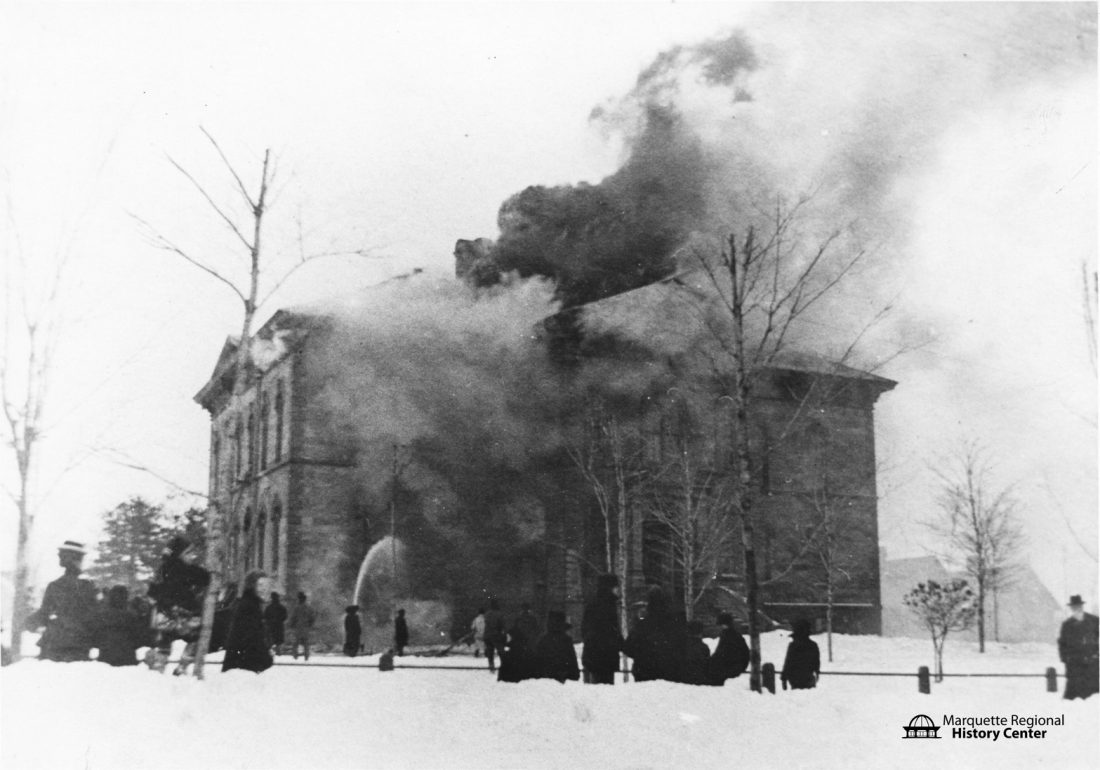 At 2 p.m. on Saturday, Feb. 17, 1900, a fire was discovered in the 1875 building by students and a teacher who were working to connect a new electric light to the city wiring. The wires had not yet been connected when the fire was discovered in the “dark room,” a shaft that carried steam pipes throughout the building. The fire department arrived promptly but the fast spread of the fire, a winter’s worth (80 tons) of coal to fuel the fire and problems with water pressure from the hydrants meant the building could not be saved. The cause of the fire was never definitively identified.

The damages from the fire to the building, furniture and books totaled nearly $50,000 but insurance only covered $20,000. Despite the financial loss, the fire still gave the community an opportunity to build an expanded school complex. During the two year building period, high school classes were held at city hall and elementary classes convened at local churches and the Coles Block on the corner of Bluff and Third streets.

Three structures were built on the lot, including a new high school, a new elementary school and a manual training center, which trained young men in manual skills and young women in domestic service. The elementary school was on Arch Street and named Froebel Elementary, after a famous German educator who advocated the concept of kindergarten. The manual training center faced Pine Street with the boiler building located behind it. The high school lined Ridge and was named Howard High School after local businessman John M. Longyear’s son, who drowned in Lake Superior in the summer of 1900.

Sandstone from the 1875 high school was used for the first floor of each building. Decorative towers were placed on the corners of the school roofs. Froebel Elementary and the boiler buildings were built first and opened in 1901. Howard High School was the last to be built, opening in 1902. The schools were set back 90 feet from the Pine Street, and stood ten feet from the homes on Arch and Ridge.

In 1927 a new high school, Graveraet, was opened on Front Street and Howard High School became Howard Junior High. In 1961 the Marquette School Board ordered the removal of the Howard/Froebel complex based on the cost of improvements required by the State Fire Marshall. Some local residents who attended the school report that it had narrow hallways and an overall run-down appearance. 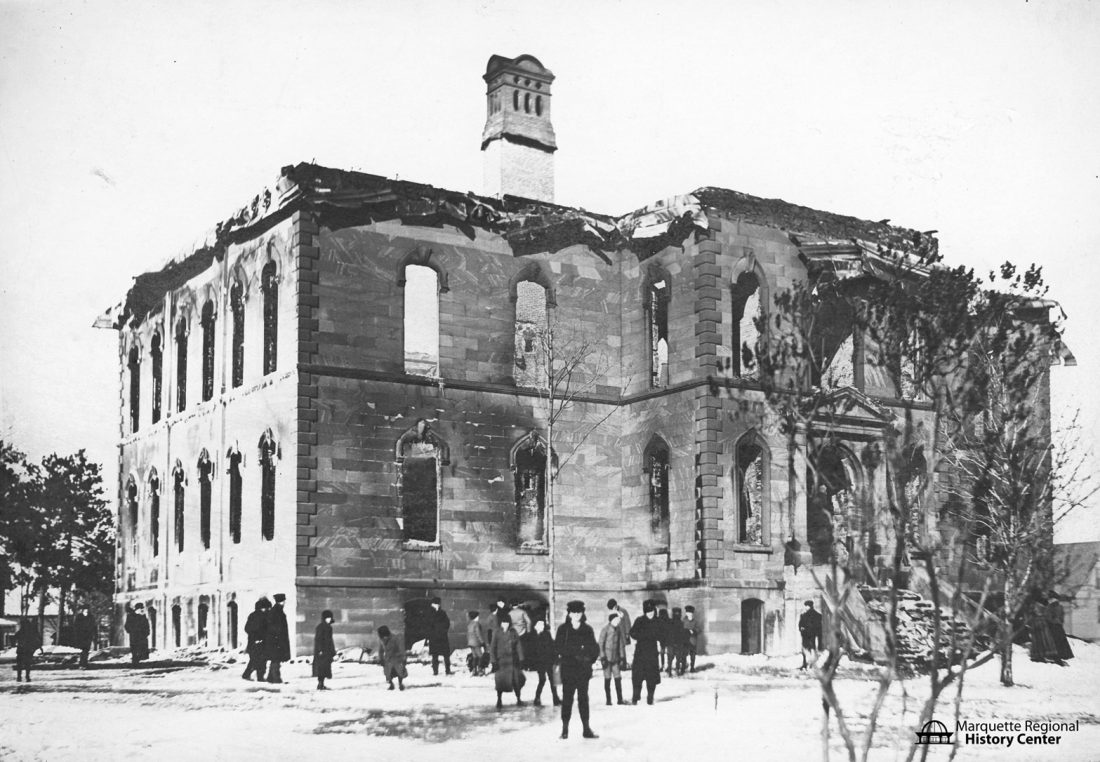 The complex was demolished over a several month period, while plans to build the current high school on Fair Avenue moved forward and the junior high moved to Graveraet. For a few years, the site remained a sandy, vacant lot with visible pieces of concrete, and remnants of a concrete stairway on Ridge.

Then, the need for reasonably priced housing for seniors on fixed-incomes led to the federally-funded construction of the Pine-Ridge Apartments which opened in November 1969.