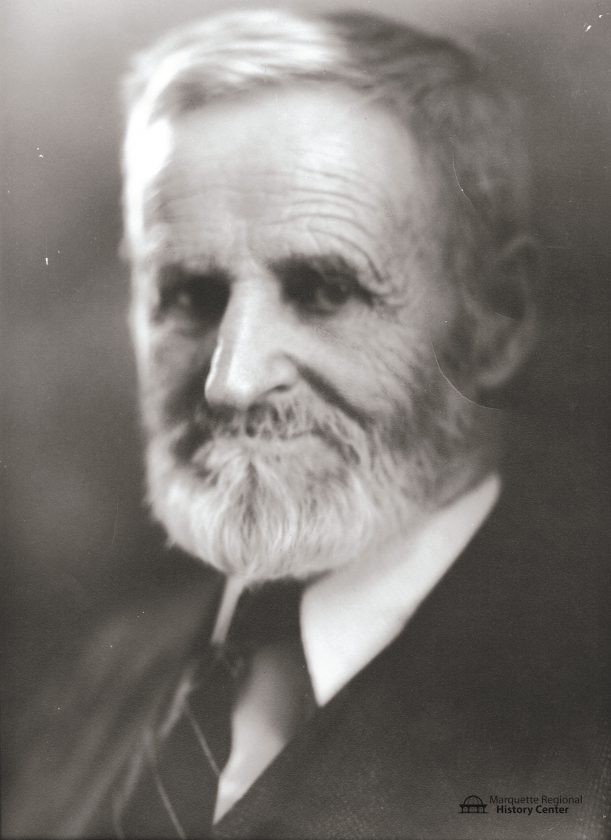 Street signs are more than just geographical markers. Read right, they are portals into a community’s past. Consider Blemhuber Avenue, an east/west street south of Highway 41 in Marquette. This avenue honors a pioneering Marquette County family that helped to shape agriculture in the Upper Peninsula.

Henry Blemhuber (1835-1914) came from Prussia to the United States in 1857. He first settled in Detroit, then came to Marquette aboard the steamer Montgomery in May 1859. His first job in the U.P. was working for the Platt Iron Works. In 1866 he purchased fifteen acres near Grove Street in south Marquette, and sold cord wood to the Marquette, Houghton, and Ontonagon Railroad Company.

At first, Henry Blemhuber shared the prevailing opinion that the soil and climate of Marquette County was too poor to grow much more than potatoes. In time, though, his experiments with different vegetable and fruit crops proved that original pessimism unwarranted. Little by little, Henry Blemhuber added to his land holdings, and the Blemhuber Farm grew to four hundred acres.

Along with his son Robert Blemhuber (1861-1950), Henry established H. Blemhuber & Son in 1883. The company continued to test different crops at the Blemhuber Farm and, for a time, at a satellite farm in the village of Birch, located near the present-day site of Granot Loma, north of Marquette.

Robert Blemhuber inherited his father’s love of agricultural innovation. He traveled throughout the United States looking for different vegetable and fruit varieties that could be grown in our cold northern climate. Robert became a local expert in grafting and budding techniques. For a time, he operated a seed store and nursery at his home located at 150 West Ridge Street.

In 1888, Robert Blemhuber platted forty acres of land in south Marquette where he built a new home. Blemhuber Avenue honors this homestead. Robert remained a strong advocate for agriculture in Marquette County throughout his life and was a founding member of the Upper Peninsula Development Bureau that encouraged farmers to settle cut-over timberlands.

Robert Blemhuber helped local farmers learn to grow cold-resistant varieties of apples, apricots, pears, plums, raspberries, and cherries. He exhibited his produce at the Michigan State Fair in Detroit and showed off a 10-inch circumference U.P. peach at the Land Show in Chicago. Robert Blemhuber is also credited with bringing fast-growing decorative Lombardy Poplars to Marquette.

Audio recordings of oral histories from farm families living on or near Green Garden Road compiled by Jayne Hiebel in the mid-1970s mention Blemhuber multiple times. Many of the German farmers that settled that part of the county purchased seeds and fruit trees from Blemhuber’s company.

Robert Blemhuber also believed that Marquette had potential to become a major tourist destination. In particular, he felt that the lands along Lake Superior could be developed into resorts and luxury housing. At a time when harbors were dirty industrial zones this idea may have seemed outlandish. Today, with construction along the lakeshore continuing at a rapid pace, Robert Blemhuber’s vision seems prescient.

When strolling or driving along the street named for them, remember how the Blemhubers helped to shape agricultural practices in the Upper Peninsula. Through decades of constant tinkering with plants, they developed varieties of fruits and vegetables hardy enough to thrive in our northern environment. In so doing, the Blemhubers influenced the local food scene in ways that changed how people live in the Upper Peninsula. We grow more than just potatoes up here, in part because of their lives spent conducting horticultural experiments.

Are you an agricultural innovator? Do you love the history of farming and gardening in the Upper Peninsula? Plan to attend Abbey Palmer’s workshop about the art and practice of seed saving from 6-7:30 p.m. June 19 at the History Center. This hands-on seminar is part of our Heritage Crafts workshop series supported by the Michigan Humanities Council. Registration is $10. Call 906-226-3571 to reserve your place and for more information.