Part 1: Backward glance at the 1911 Hartford Mine disaster 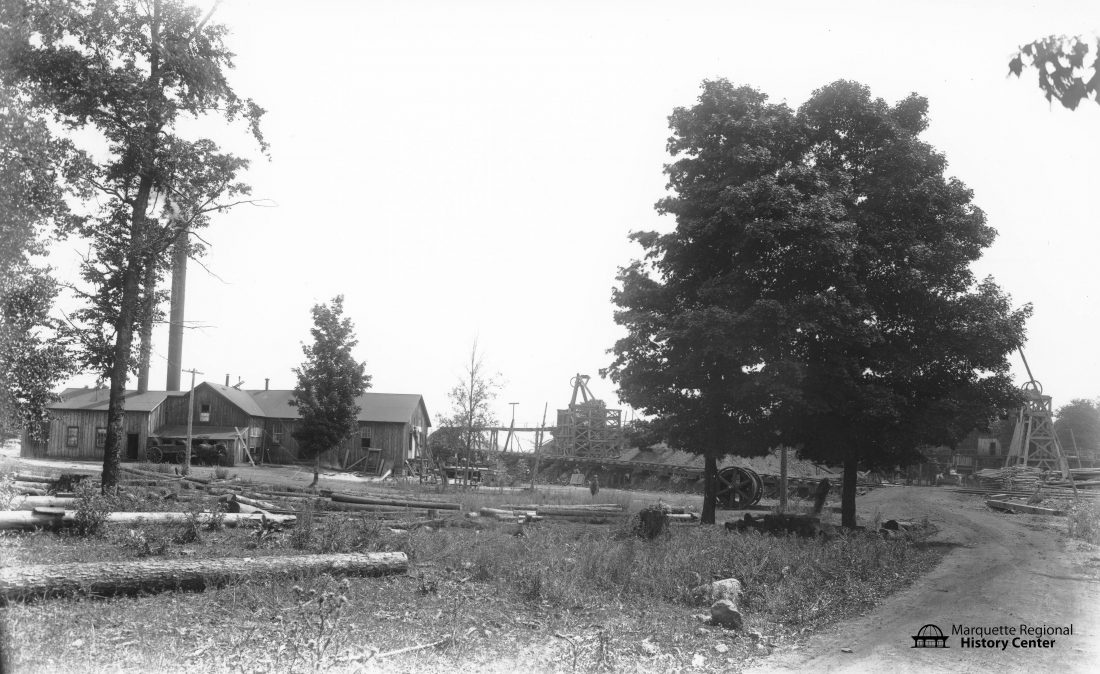 The Hartford Mine is shown. (Photo courtesy of the Marquette Regional History Center)

Adapted from an article originally published in the USW Local 4974’s The Miners’ Voice, January 1983

Friday, May 5, 1911, began like any other workday for Edward Puske of Negaunee. A recent immigrant from Finland, young Puske felt fortunate that he had finally secured employment as a miner at the Republic Iron and Steel’s Hartford Mine, which was located just south of Teal Lake.

As he stepped into cage that morning, Puske’s thoughts may have been of his wife, who was still in Finland. Now that he had a steady job, Puske hoped to save enough money to pay for her passage to America, and then perhaps, buy some land on which they could build a home and raise a family.

Little did he know as he was being lowered down to the second level of the mine’s #2 shaft to begin his day’s work that his dreams of a new life in this strange land would forever be altered by the day’s events.

Less than an hour into the shift, a pumpman on the third level noticed smoke curling down towards his work area. The pumpman immediately yelled to another miner working nearby, and together they went to investigate the source of the smoke.

As the two men approached the main shaft, they found that their worst nightmare had come true as they discovered a raging fire burning among the main shaft timbers.

Both men raced to get pails of water to throw onto the fire, but when they returned, the heat was so intense that neither man could get within striking distance of the flames.

The rapidly spreading fire was out of control. Leaving was the only alternative: to evacuate the mine as quickly as possible before the deadly gases could take their terrible toll.

Thus, the dreaded cry of “Fire!” echoed thru the drifts and stopes of the mine. It was a cry which struck terror in the hearts of the underground miners, and seventy-five men who had started the day shift on that fateful day began a race against time to save their own lives and the lives of their “pards.”

On the surface, dense columns of black smoke began to billow out of the #2 shaft. With a heavy draft from below, the smoke rose to the top of the towering 125 foot high head frame.

Seeing the smoke, the hoisting engineer began to frantically blow the mine’s steam whistle, warning everyone on the surface that the mine was afire and that men were below, perhaps trapped in the inferno.

The Hartford’s #2 shaft was five levels deep. For escape routes, the mine was connected to the Cambria Mine at the fourth and fifth levels. Also, there was the old #1 shaft although there was no ladderway to the surface as a means of escape.

For as long as it would remain possible, the miners could also escape up the burning #2 shaft in the cage, which continued to operate despite the smoke.

As the word spread among the miners to get to the surface, the smoke also quickly spread through the drifts. At some points, the smoke was so thick that the miners could barely see their way through the tunnels as they headed for safety.

When word of the fire reached Ed Puske on the second level, he immediately left with several other miners for the cage landing. The cage was waiting for them and they all piled on. Just as the cage was about to go up, Puske jumped off, and despite the frantic pleas from his fellow workers to return, he ran back into the dark drift.

Puske went immediately to an area where there were several men still working who had not been notified of the evacuation. Puske saw to it that everyone was warned of the danger before heading back towards the main shaft.

Meanwhile, back on surface, crowds began to gather awaiting news and word was sent to the Negaunee Fire Department to send all available units to the mine. Also, a message was dispatched to the Austin Mine on the Swanzy district for oxygen helmets, that being the nearest place where they were located.

Then an urgent request for additional helmets was sent to the nearest mine rescue station, which was… believe it or not…five hundred miles away in Urbana, Illinois!

As the firemen prepared to run water down the shaft, Albert Webb, a miner who had just surfaced from the burning mine, warned the mining captain that if water were poured down into the shaft, the smoke and gas would be driven back into the workings of the mine from which there were miners still trying to escape.

An argument and a scuffle ensued in which the captain and a mine clerk were knocked to the ground. Nonetheless, the captain ordered the hoses to be turned on and then ordered more water to be thrown down the shaft by severing an eight-inch discharge pipe at the collar of the shaft.

Just as Webb had warned, the air currents within the mine began to reverse as the water poured into the shaft, and the smoke and gases started to seek a new outlet through the connecting drifts to the Cambria Mine.

To those in charge, however, the most important thing was to save the shaft timbers, and they saw to it that the water continued to pour down the shaft.

In all the confusion of the evacuation, it was extremely difficult to get an accurate head count. The problem was compounded when it became necessary to evacuate the Cambria mine as well, because of the smoke entering that mine from the connecting drifts.

Next week’s article will discuss the fire’s aftermath and the fate of the missing miners.