Fire in Shaft No. 3: The Osceola Mine Fire Part 2 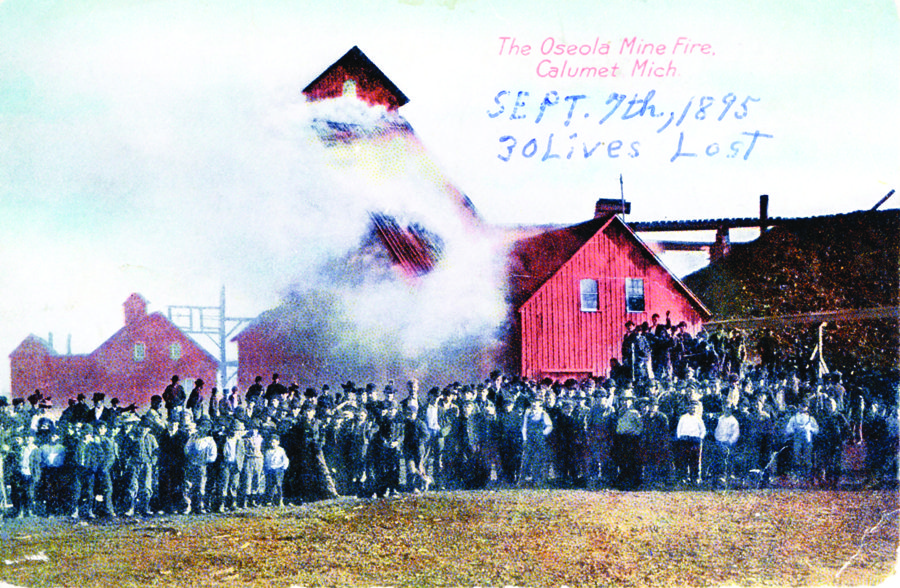 Bystanders gather outside Shaft No. 3 waiting for news of survivors during a fire at the Osceola Copper Mine in 1895 that ultimately killed 30 men and boys, leaving behind 19 widows and approximately 54 children. (Photo courtesy of Beth Gruber)

Last week’s article examined a major fire at the Osceola Copper Mine near Calumet on Sept. 7, 1895, which killed 30 men and boys, leaving behind 19 widows and approximately 54 children.

It wasn’t until Thursday, Sept. 12 that the mine officials were able to safely enter the mine. They found that the timbers in the shaft had burned to within a few feet of the surface. According to the mine inspector’s report, the majority of the bodies were found in or near No. 4 shaft, scattered between the fourth and 17th levels. Most died from suffocation. The location of some of the men told distressing stories. Alexander Daniel had been working on the 31st level of the mine, four hundred feet below the fire’s point of origin. He was found, clinging to the ladder between the third and fourth levels, he had climbed nearly 2,800 feet, more than half a mile, only to die within a few hundred feet of safety. Another man had fallen from a ladder and had been run over by a skip.

The inquest was held at Osceola by Coroner D. T. MacDonald and Prosecuting Attorney Streeter, interviewing 12 witnesses. While Captain Edwards claimed that all of the miners were notified of the fire, the testimony of several survivors did not include any mention of receiving the warning. Five men noticed the fire when they went to eat their lunch at 11:50, one of them survived but at least two did not. Two others also testified that they discovered the smoke at 12:30, an hour after the fire was first reported.

The inquest’s verdict read “That the deceased miners came to their deaths by suffocation, caused by smoke and gas from a wood fire originated in the 27th level of No. 3 shaft in the Osceola mine, on the 7th day of September, 1895. The cause of said fire unknown. We believe that the fearful loss of life is due to the fact that the deceased did not realize the seriousness of their danger, although from the evidence given this jury said deceased were duly notified. We exonerate the mine officials from all negligence in this sad affair.” It should perhaps be noted that in addition to being residents of Osceola Township, all six jurors were also employees of the mine.

In addition to the inquest, there was also the yearly Houghton County Mine Inspector’s report which noted that the cause of the fire was unknown, but did offer some blame, saying, “The only solution seems to be that is must have caught from a candle or snuff thrown there carelessly by some of the men or boys.” A letter to mining company’s management in Boston went further in vindicating the company, “Terrible as this thing is you can rest assured that no blame can in any way attach to the company. A human devil must have started it.”

A letter from the superintendent to Boston the day after the fire also discussed how quickly the mine could reopen, coldly stating “Of course there is sentiment enough in this (the worst catastrophe with regard to loss of life that has ever occurred in the Copper Country) to prevent any work in the mine until the men are found and buried. This will take several days.” The mine was closed ten days, reopening on Sept. 17. By the end of the year they had re-timbered the shaft and it was equipped from the surface to the 23rd level. They hoped to have the shaft fully operational by April 1, 1896.

Many of the men were members of various fraternal organizations and their families received death benefits from these societies. Other death benefits came from the Osceola Aid club — an organization supported by the miners’ monthly contributions– and from the company itself. Additionally, following the tragedy, Postmaster of M. R. Redmond of Hancock began soliciting aid for the bereaved families.

In May 1897, one of the widows, Maria Malstrom, filed a lawsuit against the Osceola Mining Company charging “wrongful acts and negligence.” She asked for $20,000 (about $500,000 today). After a number of delays the case was set for trial in March 1898 but Mrs. Malstrom’s attorney was unable to attend and the case was dismissed.

On the 11th anniversary of the fire it was reported that many of the survivors were “rendered seriously ill and the effects of trying to struggle for life brought grey hair to many workmen while young in years. Some of the survivors were so affected that in a few years they went insane with brooding.” Shaft 3, along with the rest of the mine remained in operation until 1931. The lode was worked again in the 1950s by Calumet & Hecla, but mainly through the No. 6 shaft to the south.