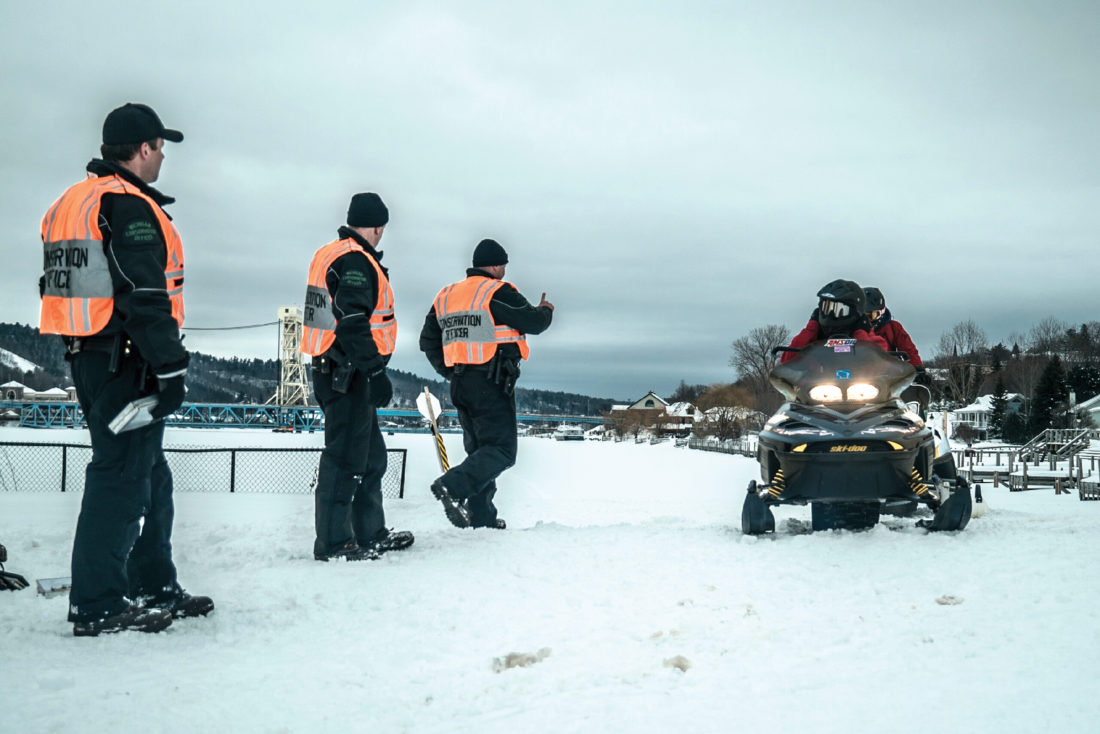 HOUGHTON — Michigan Department of Natural Resources conservation officers teamed up with deputies from the Houghton County Sheriff’s Office to address several recent loud noise complaints in the city of Houghton.

The group sound enforcement patrol was conducted Feb. 11 along Trail No. 3 at Kestner Waterfront Park.

More than 450 snowmobilers were contacted throughout the day by the officers in the group patrol. Various law violations were addressed.

In one incident, DNR Conservation Officers Ethen Mapes and Brian Lasanen stopped a group of four snowmobilers for failing to stop at a stop sign.

“Through their investigation, it was determined that all four operators were driving under the influence of drugs,” said Sgt. Grant Emery, a DNR area law supervisor from the Baraga office.

The four snowmobilers were arrested and jailed for operating a snowmobile while under the influence of a controlled substance. Two of the riders were also ticketed for careless operation of a snowmobile. The Houghton County prosecuting attorney has authorized charging one of the riders for being in possession of marijuana.

Under Michigan law, the muffler on a snowmobile must be in good working order and, when in constant operation, noise emission cannot exceed 88 decibels at a distance of 13.1 feet. This is measured using the 2004 Society of Automotive Engineers standard J2567 for a stationary snowmobile manufactured after July 1, 1980.

Riders whose sleds exceed the established noise limits can be ticketed.

During the Houghton enforcement effort, 15 riders were ticketed for exceeding the 88-decibel limit. In a similar patrol the same day in Grand Marais, conservation officers ticketed nine snowmobilers for exceeding the decibel sound limit.

Enforcing snowmobile noise violations is part of a statewide effort to create more enjoyable experiences for all trail riders, and to help ensure the state’s 6,200 miles of snowmobile trails — half of which run through private land — remain open to snowmobilers in the future.

Without these partnerships, the expansive, interconnected trail system enjoyed by thousands of snowmobilers each year wouldn’t exist.

Aho said after providing the reasons behind the patrols, snowmobilers often understand and appreciate the enforcement effort, sometimes thanking the officers for what they do.

During the Houghton patrol, multiple snowmobilers who received tickets for noise violations thanked Aho and Leadman, and shook their hands for enforcing the snowmobile emissions law.

For more information on snowmobiling in Michigan, including current laws and regulations, visit the DNR’s website at www.michigan.gov/snowmobiling.