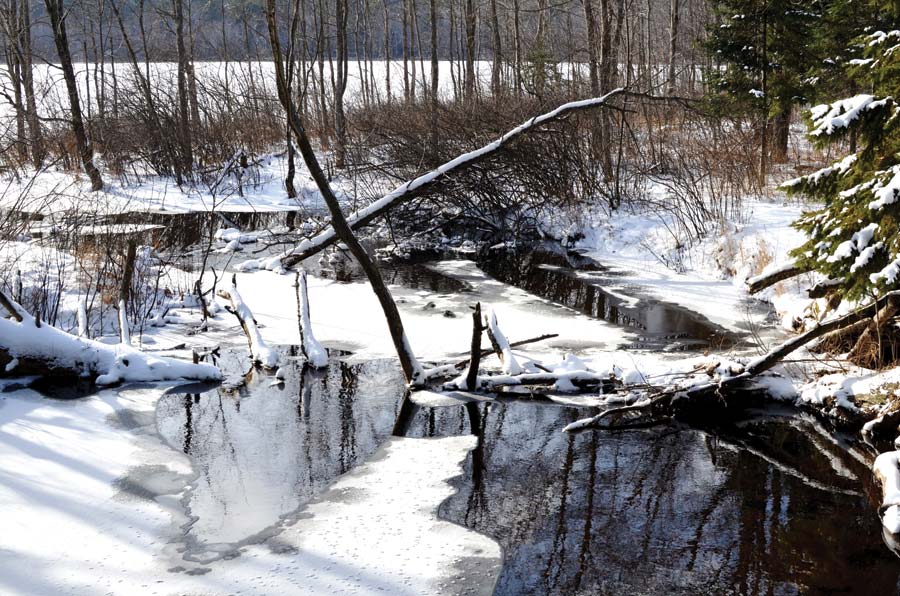 Harlow Creek gurgles its way out of Harlow Lake at the Little Presque Isle tract on a cold winter’s day. (Photo courtesy of the Michigan Department of Natural Resources)

“Our team has been reviewing comments received from the public this fall and our plan for recreation trails at Little Presque Isle is taking final shape,” said John Pepin, DNR deputy public information officer. “We anticipate an announcement on our trails designations to come sometime over the next several weeks.”

Meanwhile, no changes will be in effect this winter for the recreation trails at Little Presque Isle.

Through a previous process during the 1990s, 19 miles of hiking trails were approved at Little Presque Isle.

In May 2015, the Friends of Harlow submitted a trails proposal to the DNR, seeking designation of 19.7 miles of non-motorized, multi-use trails at Little Presque Isle.

However, given that hiking was already a permitted use at Little Presque Isle the proposal was evaluated for designating mountain biking use on the existing hiking trail as well as some new trails, created informally by the public.

For several months, a team of field professionals from the DNR’s parks, wildlife and forest resources divisions compiled information and evaluated on-the-ground conditions along the proposed trails at Little Presque Isle.

The DNR team produced a draft recommendation for the proposed trails, which included 17.1 miles of mountain bike-hiking trails and 10 miles of winter route for snow bikes.

In September, the DNR held an open house in Marquette Township where the plan was unveiled. Written comments from the public were solicited at the open house and afterward for 30 days.

During the DNR’s trails review process, the DNR may potentially redesign some trails or alter types of permitted trail uses to address resource protection concerns and desires for expanded recreation opportunities.

“Over 100 comments were submitted and the team has reviewed them as part of the process,” said Stacy Welling-Haughey, DNR U.P. coordinator.

The DNR will also conduct an internal review of the final trails plan. Once the process has been completed, the plan will be announced and put into effect, governing future use of non-motorized trails at Little Presque Isle.