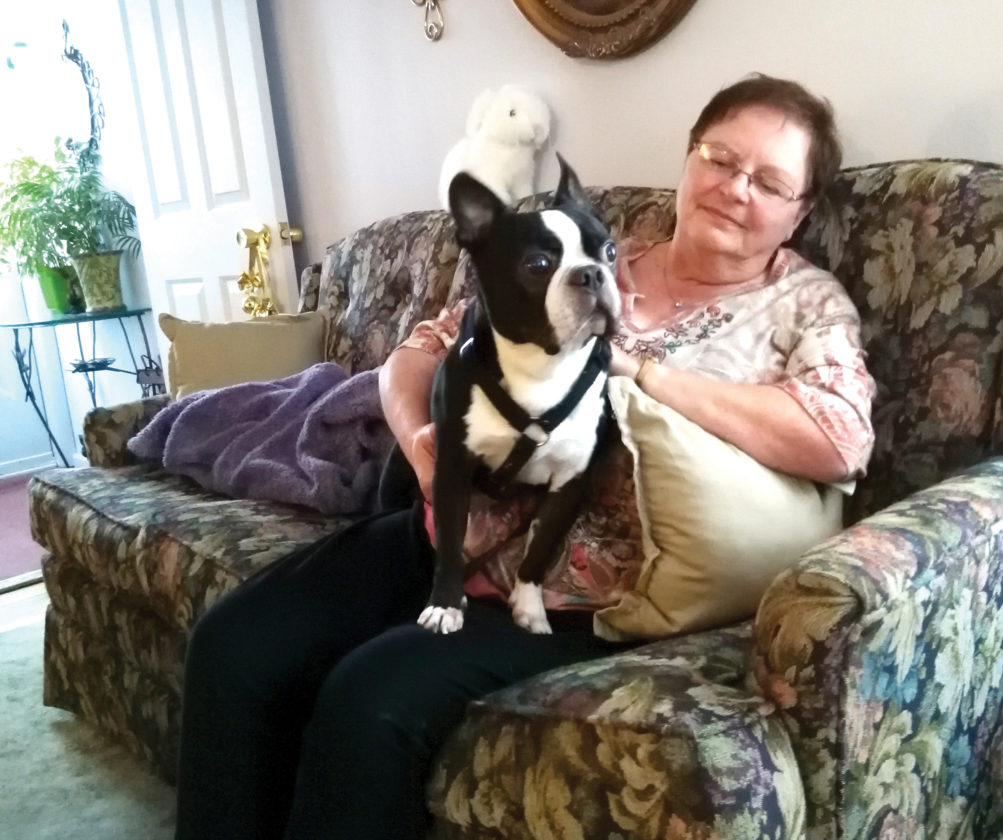 Joann Peterson is one of dozens of Copper Country residents who’ve been assisted by the Houghton Energy Efficiency Team, under the direction of Melissa Davis. In Peterson’s case, HEET was able to facilitate four major energy-saving improvements to her home. (Photo courtesy of Marcia Goodrich)

CALUMET — It’s the day after Thanksgiving, and Joann Peterson is very, very grateful.

“This has been unreal,” she says. “You can’t imagine how happy I am.”

Peterson is one of the dozens of Copper Country residents who’ve been assisted by the Houghton Energy Efficiency Team, under the direction of Melissa Davis. In Peterson’s case, HEET was able to facilitate four major energy-saving improvements to her home.

The first was winterization.

“There was a breeze in here all the time,” Peterson says, sitting down for a chat in her kitchen. “But then Melissa came here with a group of high school kids.”

Davis and a team of students from Horizons Alternative High School got to work insulating the rim joists on the north wall of Peterson’s basement. Davis finished the job earlier this year, when an AmeriCorps crew came to the Copper Country for a winterization blitz.

Now Peterson’s kitchen is cozy and comfortable. It also has a new, energy-efficient refrigerator–energy-saver number two.

“When they were insulating the rim joists, Melissa asked if I wanted a new refrigerator,” Peterson said. Even though the one she had was over 20 years old, she almost said no: “I thought for sure I’d have to pay $100 or something, and I didn’t have it.” Nevertheless, the new, refrigerator arrived as promised, no strings attached.

It was provided by Efficiency United, which offers a variety of energy-saving programs to UPPCO and SEMCO customers. Some are targeted at income-qualified residents, like Peterson, who was forced to retire early from her job at the Michigan Tech Bookstore because of a chronic illness.

“Joann is on her own with her dog, Jake, and has been slowly upgrading her house, but her income is such that she can’t handle many sudden, big expenses,” Davis said. “We helped put her in touch with Efficiency United. People usually don’t find these resources on their own.”

Buying a new water heater would have been one of those sudden, big expenses, and Peterson’s old water heater was fading fast. So, Davis steered Peterson toward another Efficiency United program, and energy-saver number three arrived in the form of a tankless, on-demand water heater.

But what worried Peterson most of all was her clanking furnace. Again, Davis encouraged her to apply for a new furnace through Efficiency United. She was ecstatic when she learned she qualified. “I’m still paying on my roof,” Peterson said. “Can you imagine what a new furnace would have done to me?”

Not only did HEET help her avoid a financial crisis, it should save her money in the future. “It’s still a little early to say, but I can tell you my gas bill last month was just $49,” Peterson said.

Davis is gratified that she and HEET were able to help. “It’s really nice to be able to give people good news, and we’re so happy that Joann’s set up,” Davis said. “Now she won’t have to worry about what’s going to fall apart on her next.”