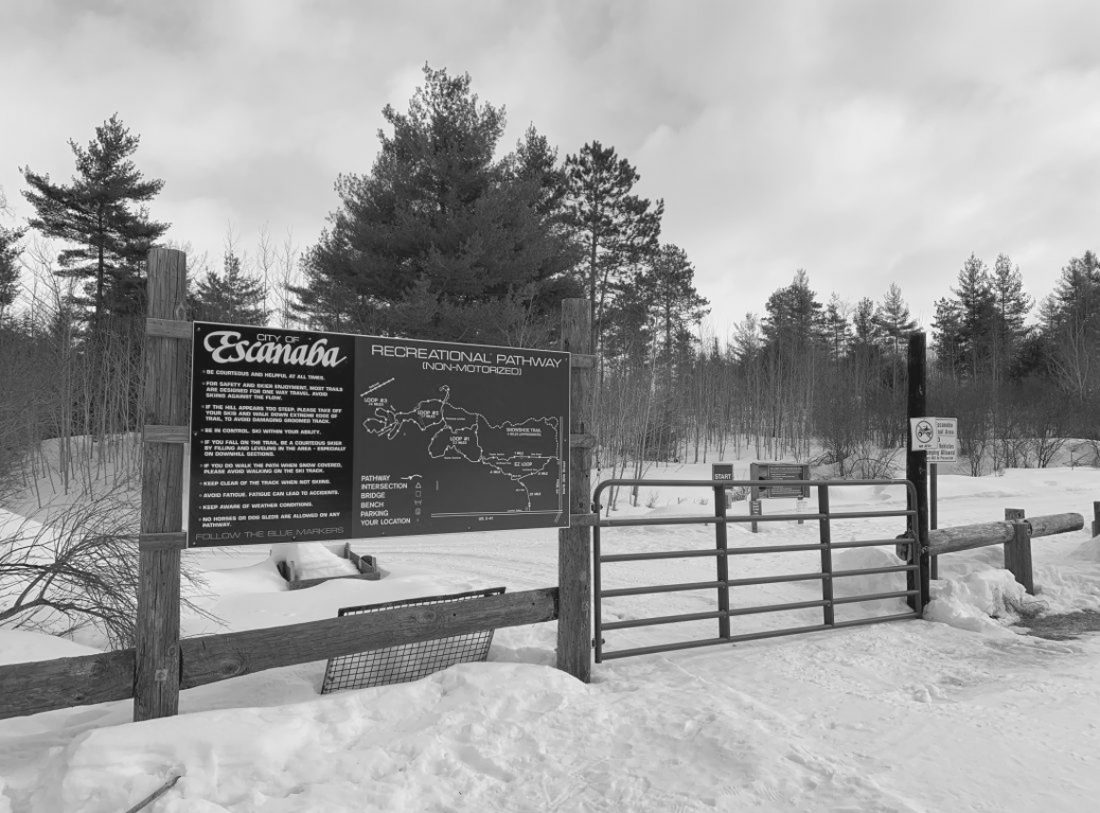 One of the entry points to Escanaba’s recreational non-motorized pathways near 19th Avenue North in Escanaba Feb. 27. Snowshoeing has gained popularity locally, especially with free access to snowshoes through the Snow Trek program. (By Clarissa Kell, Escanaba Daily Press)

ESCANABA — The combination of warmer than usual winter temperatures and heavy snowfalls has created a winter wonderland perfect for snowshoeing in the Upper Peninsula. The winter activity has grown in popularity locally, especially with free snowshoes available for use.

Snowshoes for both adults and children can be borrowed for free at the Escanaba Civic Center; Public Health, Delta and Menominee County at its Escanaba office; Moraska Saw and Supply in Powers; or the Marinette-Menominee YMCA in Menominee during normal business hours.

Two locations involved in the Snow Trek program have seen an increase in snowshoe loans this year.

So far this year, she said there have been over 100 snowshoe check-outs from the Civic Center.

“This winter has been busier because winter started earlier,” Peterson said. “And we’ve had some beautiful days where people can enjoy the outdoors.”

She noted rate of snowshoe check-outs are extremely dependent on the weather conditions.

The average check-out rate since the Civic Center became a part of the program seven years ago is about 136 per season.

According to Jim Moraska, Spalding Township Supervisor and owner of Moraska Saw and Supply in Powers, the township has been involved with the program for seven years now.

He explained after the first year of the Snow Trek program, he had contacted Mike Snyder of Public Health to offer the program in northern Menominee County.

Since becoming involved in the program, number of checked out snowshoes at the Powers location has increased in recent years.

Moraska attributes the increase in participation to more people knowing about the snowshoes at his business and having enough snow for the winter activity.

Both Moraska and Peterson agreed the program is a great way for people to enjoy the outdoors in the winter, doing an activity they may not otherwise have the ability to do.

Both Escanaba and Powers have local area parks for people to explore while walking above snow in snowshoes. However, residents aren’t required to just stay within those limits.

Moraska said many of the locals borrowing snowshoes in Powers are either bringing them home and using them on their own properties or traveling to other scenic locations across the Upper Peninsula.

Peterson noted the Escanaba Parks and Recreation Department provides maps of local areas where there are snowshoe trails, but people can bring the snowshoes anywhere.

To borrow snowshoes from any of the locations a person must be 18 years or older, fill out an application and present their ID.

There are limited snowshoes available, which cannot be reserved and must be returned within 48 hours of the time they are loaned.

At the Public Health, Delta and Menominee County building in Escanaba there are nine pairs of different sizes of adult snowshoes.

The Civic Center has 16 pairs of snowshoes in adult and youth sizes.

Peterson said she hopes to expand the program at the Civic Center in the future with more grant money.