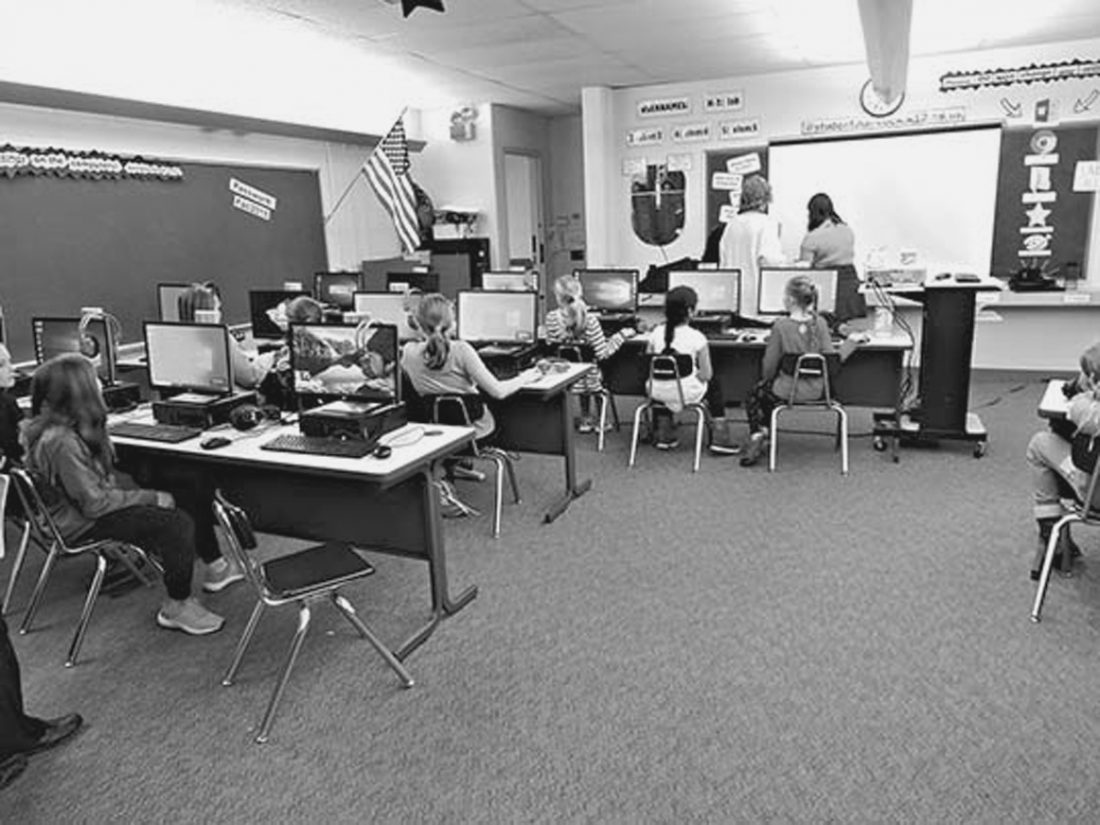 Graham Jaehnig/Daily Mining Gazette Sixteen girls, in grades 3-5, signed up for Barkell Elementary School’s new after school computer programming course, “Girls Who Code,” which, through the end of this school year, will function as a pilot program, before becoming permanent in the Hancock School District at the beginning of the next school year.

HANCOCK — A new after school program, Girls Who Code, started at Barkell Elementary School Monday, which was introduced last week by students of Michigan Technological University. The students, all female, are members of the Girls Who Code national program.

“Through Michigan Tech, three students, I believe they’re all seniors,” said Principal Dan Vaara, “have been identified, who are going to teach this course, ‘Girls Who Code,’ and they have already been here.”

The university students spoke to upper elementary grade girls, then different upper elementary school classrooms, to offer an overview of what coding is, and to tell the children a bit about themselves, followed by a question-answer period.

“The kids had some good questions and answers,” Vaara said, “like ‘what got you into coding.’ ‘What is coding?’ was one of the questions.”

Coding, simply stated, is the process of using a programming language to get a computer to behave how the operator wants it to. Every line of code tells the computer to do something, and a document full of lines of code is called a script.

Each script is designed to carry out a job. This job might be to take an image and change its size. It might play a certain sound or piece of music. When someone clicks “like” on someone’s post on social media, a script is what makes it happen. Computers do exactly what they are told to. If a user tells a computer to count upwards, and does not tell it to stop, it will count forever. Being good at programming, or coding, is knowing how to instruct a computer to act.

“We have really emphasized coding in STEM (Science, Technology, Engineering, and Math) activities over the past few years in our building,” said Vaara. “Our teachers have done a really good job at identifying lessons that they can teach to their students. We’ve had other entities come in and do a lesson here or there; we’ve done some of that with our Family Science Nights. So, we’ve been trying to provide as many opportunities as we can for our students, but one thing we haven’t done until now is to set up an actual program that meets once a week after school, throughout the course of the year.”

The coding program will continue through the end of this school year and is, essentially, a pilot of sorts, to smooth out any rough spots, learn more about the program, and get the children more excited moving forward for the 2020-21 school year, as the program will become permanent at Barkell.

At least for now, the boys in the program attend once per week, on Tuesdays, while the girls attend twice a week.

Hancock Public Schools has two opportunities for coding, with grades 3-5 participating at the elementary school, and grades 4-8 at the high school’s computer lab.

“This is where the world is going,” said Vaara, “robotics, coding — computer programming is obviously far more a reality in our lives say 30 or 40 years ago.”

In order to better prepare students for the future, Vaara said, they need to be exposed to things like coding.

“When they get to a point where they are taking a course in high school or in college,” he said, “they’re going to be much better prepared, having been part of these programs.”

Students in upper elementary and middle school grades are trying to figure out what is they have a passion for, or an interest in, said Vaara, and also, what they may want to do with the rest of their lives.

“So, if they can find out in 4th or 5th grade that ‘Hey, I really like this,’ that really gives them a heads-up on everyone else,” said Vaara, “because it gives them more time to continue to pursue those areas.”