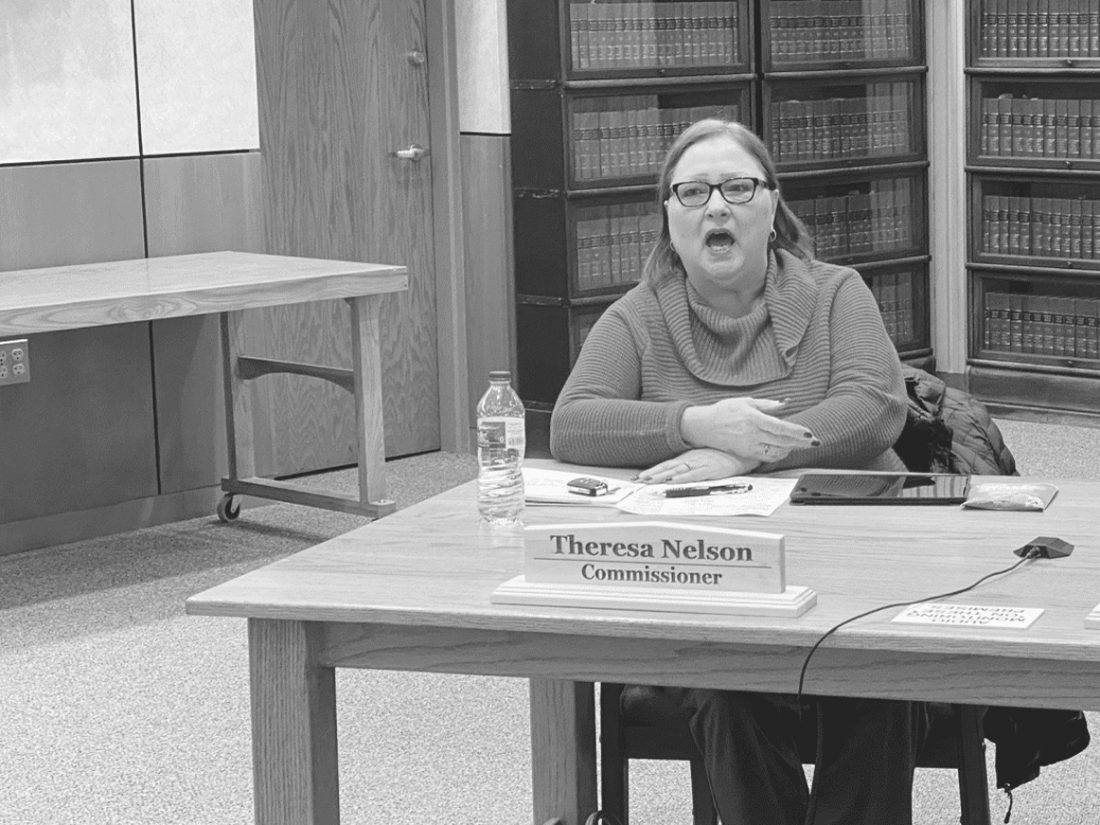 Commissioner Theresa Nelson expresses her concerns about a resolution that will make Delta County a “sanctuary county” for the Second Amendment during a Delta County Board of Commissioners meeting Tuesday. (Photo by Jordan Beck, Escanaba Daily Press)

ESCANABA — After hearing arguments for and against a proposed resolution to make Delta County a “sanctuary county” for the Second Amendment from county residents, the Delta County Board of Commissioners narrowly voted to adopt the resolution Tuesday.

Under the resolution, Delta County will be declared a Second Amendment sanctuary county. The board will support the county’s sheriff and prosecuting attorney in the exercise of their discretion to not enforce unconstitutional firearms laws.

The decision to move forward with the resolution was made during the board’s regular meeting Tuesday evening, which was held at the Delta County Courthouse instead of the Delta County Service Center due to anticipated attendance levels. Community involvement met board members’ expectations, with more than 100 people present at the meeting.

The possibility of naming Delta County a Second Amendment sanctuary county has been discussed by the board since Nov. 25, 2019, when Commissioner David Moyle shared an early draft of the resolution. Discussion continued at the board’s Jan. 14 committee of the whole meeting and Jan. 21 regular meeting; at the Jan. 14 meeting, board members agreed to put the proposal on the agenda for their Feb. 4 meeting.

A significant portion of Tuesday’s meeting was dedicated to public comment on the proposed resolution. People on both sides of the issue shared their thoughts and feelings at the meeting.

Speaking on behalf of the Delta County Gun Owners Association (DCGOA), Wells Township resident Robert Petersen addressed the question of why the proposal focused solely on the Second Amendment instead of the entire Bill of Rights.

“The Second Amendment is constantly under assault from people and politicians that have no regard for inherent right to self-preservation. Today, there are many bills right here in the state of Michigan just waiting for the right minute to be passed into law that would totally gut our inherent right to keep and bear arms,” he said.

Petersen discussed the importance of the Second Amendment to the Constitution as a whole.

“The future of the entire Constitution rests on the shoulders of the Second Amendment. Without the power to defend it, the Constitution is nothing more than a piece of paper,” he said.

Diane Weber, of Gladstone, spoke about the proposed resolution’s role as a precautionary measure. By way of example, she noted people are willing to prepare for cold weather or flu season.

“But when it comes to our freedom and our Second Amendment — the cancer that is eating away at us — we put our head in the sand, we say ‘what does that mean to us? That doesn’t matter to us. I don’t think we need to have anything to do with that,'” she said.

According to Webber, her husband, son and grandson have “sacrificed greatly” to protect her Second Amendment rights.

“I also have a Bible at home that I have read cover-to-cover several times, and the one who initiated the freedom in the first place and inspired those to go on to fight for it says if I don’t speak up, stand up, fight and vote for those who are morally for this, then I am going to be held accountable,” she said.

On the other hand, Denise Young — a Ford River resident and local teacher — spoke about her experiences doing safety drills with her students after the Columbine High School massacre.

“Try going back to teaching once you’ve traumatized a classroom of innocent children, and it’s not very easy,” she said.