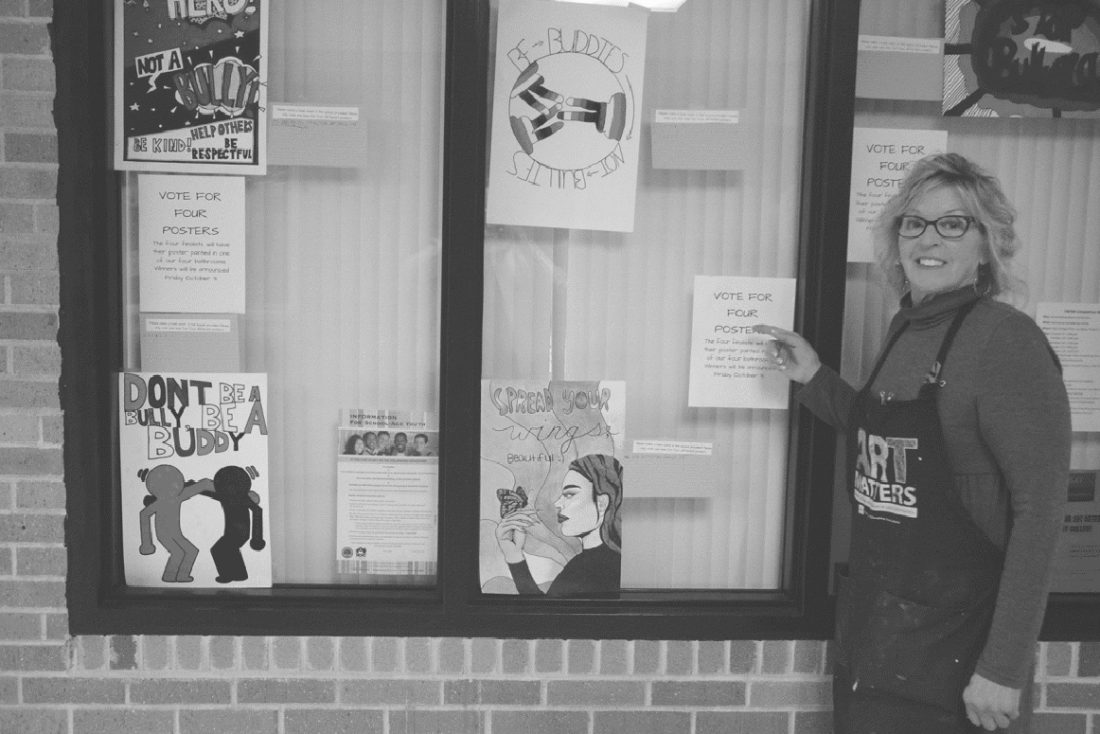 Escanaba High School art teacher Cathy Uhazie stands at the high school front office where anti-bullying posters are shown. The student body is voting for four of 10 designs that will be used as a model for murals in four high school bathrooms. Uhazie’s art students designed posters by deciding on a famous artist’s style and using anti-bullying ideas. (Photo by Deborah Prescott, Escanaba Daily Press)

ESCANABA — Students enrolled in introduction to art at the Escanaba High School, recently designed anti-bullying posters for a competition. Through this week, the student body will vote on 10 designs. The four designs that receive the most votes will each be painted on a wall in two of the high school boys and girls restrooms.

Escanaba art teacher Cathy Uhazie asked her students to choose a famous artist’s style and follow it to create a design expressing their opinion of anti-bullying.

“The student body is voting on the most creative or clever ideas to stop, minimize, or bring ttention to bullying,” said Uhazie. “The four finalists will win a prize and their idea will be painted and displayed in the high school restrooms.”

Before the art students created their posters, Uhazie asked them to share their thoughts on bullying. It was clear many students thought bullying caused depression and suicidal thoughts. Some students didn’t believe awareness had stopped or minimized it. Some students knew of students telling other students to kill themselves, and one student answered a way to avoid getting bullied was to change the thing they were getting bullied about.

“It’s very sad and concerning what some kids go through in school,” Uhazie said.

The students were asked how had awareness of bullying prevented it in their lives, some student responses included:

“It didn’t prevent anything.”

“The fact that they are noticing it and pointing it out makes me happy, but it really hasn’t prevented anything in any life yet.”

“I have never been bullied in my life, but I have seen it at my old school and heard about it. It was online and it was difficult for the person, but the next day they told the principal and it was take care of.”

A couple students said, people who bully just want attention. Uhazie asked them how can bullying be stopped. Following are examples of what she received back.

“We can’t. It has been going on for longer than life, but we can attempt to make a change ourselves and hope for a positive impact from being nicer to others.”

“By teaching kids to accept everyone for who they are and to be kind and open minded.”

“We can stop bullying by punishing the kids that are doing the bullying.”

“Getting the people bullying suspended and, or expelled instead of a measly detention.”

“We can stop bullying by teaching others to learn what to say.”

“Get more speakers in schools to talk about all types of bullying, have teachers watch the cameras closer or listen closer for the bullying.”

“Protecting kids who get bullied. Punishing people who bully. Starting programs to help kids who are bullied.”

“There is no way to stop it. It’s impossible.”

Escanaba Orchestra teacher Joe Harmsen received an online article showing positive messages painted on restroom walls in other schools. He presented the idea to the school’s Social Worker Le Ann Bink and the idea was shared with Uhazie, who incorporated it into the students projects.

The idea of painting positive messages in the high school restrooms interested the General Federation Women’s Club, who are supporting the project by giving a grant to the school for needed paint supplies.

“The paintings will be painted on the wall and will fit the size of the wall space available in each bathroom. I will have the artists who’s posters are chosen also be the artistic foreman,” said Uhazie.

All four paintings will be complete in January and considered the student’s final exam.