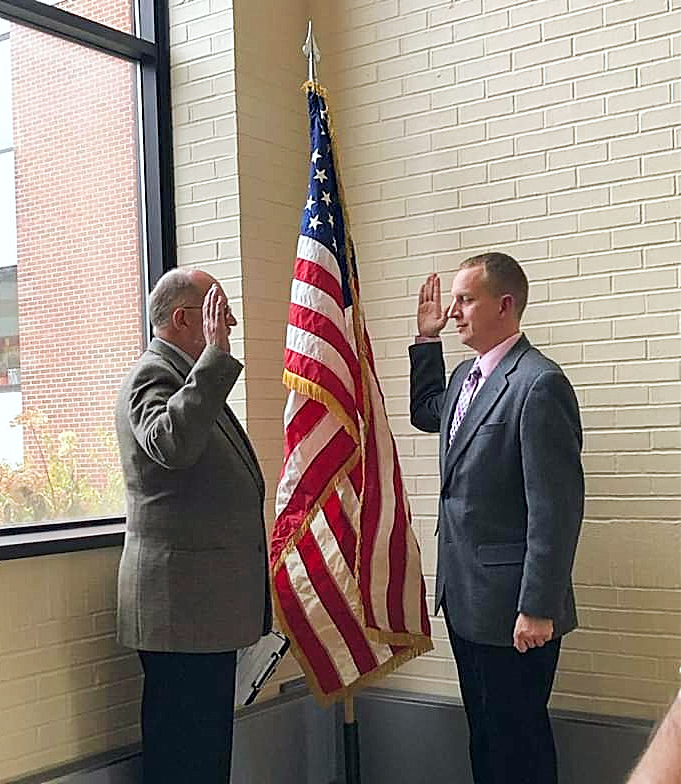 Dr. Michael Luoma is seen during his recommissioning ceremony performed by his father, Dr. Jerry Luoma, at the Aspirus Laurium Clinic in Laurium. (Photo courtesy of Aspirus Keweenaw)

LAURIUM — From serving our country with honor to serving our communities with the highest levels of care, Dr. Michael Luoma makes it his life’s mission to be there for people when they need him most.

On Monday, Nov. 4, a special recommissioning ceremony and farewell social was held for Dr. Luoma in honor of his return to active duty in the U.S. Air Force. Dr. Luoma, who served as medical director, chief of staff and a family medicine physician at Aspirus, will serve as a lieutenant colonel. His initial destination is his birthplace in Germany.

“After much soul-searching and thought, I know in my heart that I need to finish my dream of serving a full career in the military,” he said. “For those who know my family and I well, you know that we hold great regard for service to our country.”

Dr. Luoma has been with Aspirus since 2003. In that time, he fulfilled one of two lifelong dreams: to practice medicine alongside his father, Dr. Jerry Luoma. It was an experience Dr. Michael Luoma will “cherish forever.”

Like many of his family members, Dr. Michael Luoma is dedicated to the military. He served as a medic with the U. S. Army’s 82nd Airborne during operations Desert Storm and Desert Shield. He was a medic with the Michigan Army National Guard and later served as a physician in the U.S. Air Force for seven years.

At Aspirus, Dr. Michael Luoma played a significant role in physician recruitment and retention. He has overseen the construction of the hospital’s new emergency department and ICU, and the Aspirus Houghton Clinic.

His roots run deep in the community, as he held a seat on Calumet Public Schools’ Board of Education for nine years. He actively volunteered for community events, including CopperDog 150, Great Deer Chase, Copperman Triathlon, and numerous home football and hockey games. He served as the Medical Director of Emergency Services for the Isle Royale and Keweenaw Historical National Parks.

Dan Dalquist, Chair of the Aspirus Keweenaw Hospital Board of Directors, said Dr. Michael Luoma has “consistently shown his commitment to the community and to our hospital, staff and patients.”

“We will miss him; however, we have complete confidence in his ability to serve our military men and women,” Dalquist added. “Safe travels, Dr. Michael Luoma.”

In his departure, Dr. Michael Luoma’s patients are being transitioned to other Aspirus providers to ensure there is minimal disruption in their care.

Dr. Michael Luoma said Aspirus has strong local and system leadership and will continue to provide the highest levels of care for patients close to home.

“I am proud to have had the opportunity to practice at Aspirus and live in this community,” he said. “The people of the Copper Country are unique, hearty, genuine, caring and accommodating. You will always be my family.”