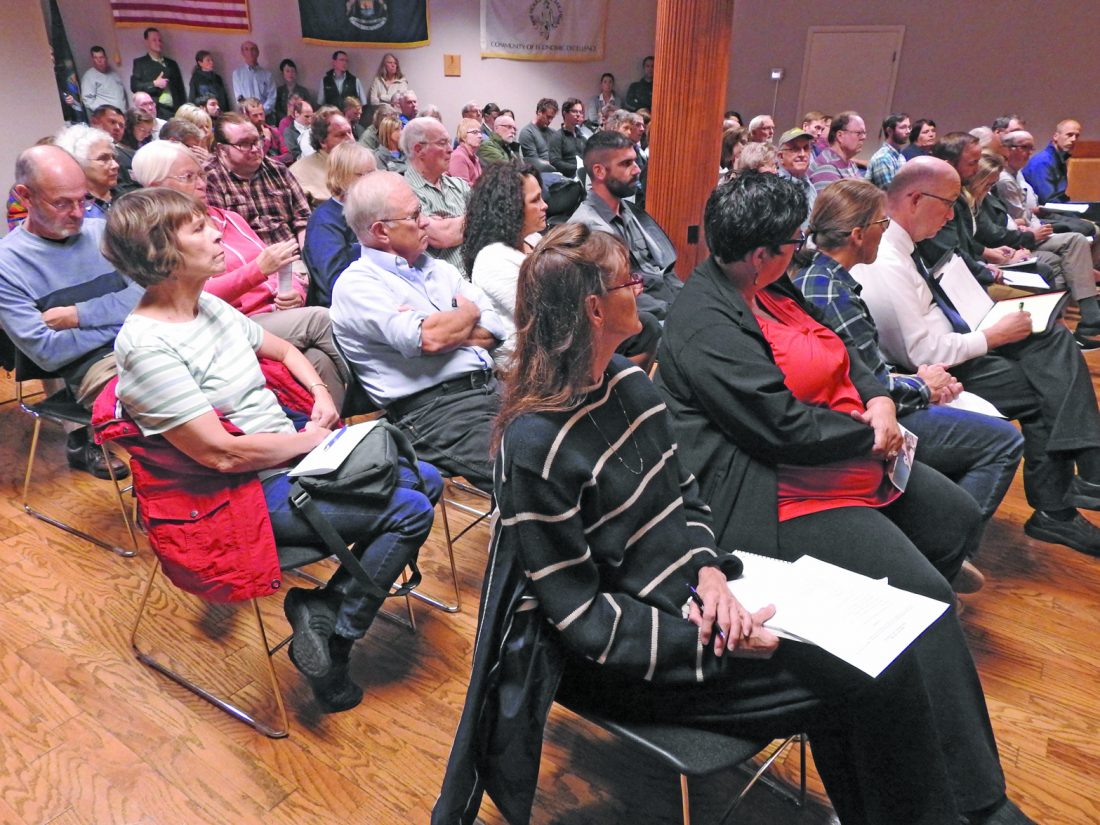 HOUGHTON — Houghton will begin negotiations with Veridea Group of Marquette on a potential mixed-use development on the Houghton waterfront.

The Houghton City Council approved beginning the process by a 5-2 vote, following a lengthy public hearing at Wednesday’s meeting.

Seeking to redevelop the aging large parking deck area on Lakeshore Drive, the city solicited statements of qualification from developers.

At its previous meeting, the council heard presentations from Veridea, Julien Properties and Moyle Development.

Councilor John Sullivan, who made the motion for Veridea, said he favored Veridea over the others due to its experience.

“They’re bringing in a super contractor, super parking consultant, all the architects are good,” he said after Wednesday’s meeting. “Just their experience and general credibility.”

Councilor Mike Needham and Mayor Bob Backon voted against the Veridea motion. They favored waiting in light of public comments that were skeptical of the proposal.

“We’ve got a lot of information tonight to digest,” Backon said. “I don’t think we’ve really had time to look at everything that’s been presented.”

Sullivan said he voted to move forward to “get this show on the road.”

“Veridea, in my opinion, was the one we should be working with, and therefore, let’s proceed,” he said. “Every comment tonight was valid, all kinds of good points, and we have to incorporate all those. Hopefully we can come up with something that Veridea will like and will be agreeable to doing.”

“I think if we don’t do what this community tells us, then I don’t think any of us will be here for very long,” he said. “If the project fails, then we’ll never get the chance to have another one. I think it’s very important whatever we do be done very, very, very well.”

More than 80 people came to Wednesday’s hearing, with the crowd spilling into the corridor outside. Many who spoke Wednesday feared the development would disrupt sight lines and alter the city’s character.

Edward “Bud” Cole, who owns several properties in Eagle River and Hancock, said based on the designs seen online, the development would jeopardize “irreplaceable assets,” such as the city’s scenic views and historical sensibility. He called for the city’s zoning commission to adopt height restrictions downtown.

“Any building development that eclipses the view of historical homes and commercial buildings to the canal, and across to the hills, should be a non-starter for any development,” he said.

Some questioned concentrating so much of the waterfront in one developer, or whether a hotel would be viable.

Dianne St. Amour, president of the Keweenaw Convention and Visitors Bureau and manager of the AmericInn in Calumet, said hotels in the area are running at less than 51% occupancy for the full year. The AmericInn was at capacity for only seven nights last year, she said.

Michele Thomas, director of development for Veridea, said it would continue working with the city and residents to learn what the community wants. Veridea hosted a session Wednesday morning with downtown business owners to hear their concerns.

“The first thing we’re going to do is listen — hear what they have to say, and try to do our best to mitigate their fears, and build a development that’s going to mesh well with the city and contribute to the economic viability of downtown business owners and the city of Houghton,” she said Wednesday night.

Wednesday’s motion stipulated that negotiations would be handled by the city’s waterfront development committee, consisting of City Manager Eric Waara, Sullivan, Downtown Development Administration member Dick Gray and Planning Commissioner Tom Merz. They would report in writing to the city council monthly on the status of negotiations. The final agreement would also be subject to council approval.

Houghton resident Ben Ciavola wants to maintain public access to the waterfront, and development that fits the character of the city.

“It’s really going to be interesting to see what the rest of the process looks like,” he said. “I hope there’s significant opportunities for public comment, and that we can take the process to somewhere that creates a better space for Houghton residents to live and work in.”

Alan Kiley, owner of Joey’s Seafood & Grill, agrees something should be done with the parking deck area. The concept presented two weeks ago did too much to wall off the waterfront from the downtown, he said.

“I’m not a huge fan of what they presented,” he said. “However, I think that they actually have their ears open and they have a big team. It seems like hopefully they will move forward and say ‘Let’s make something that’s actually going to work with each other.'”