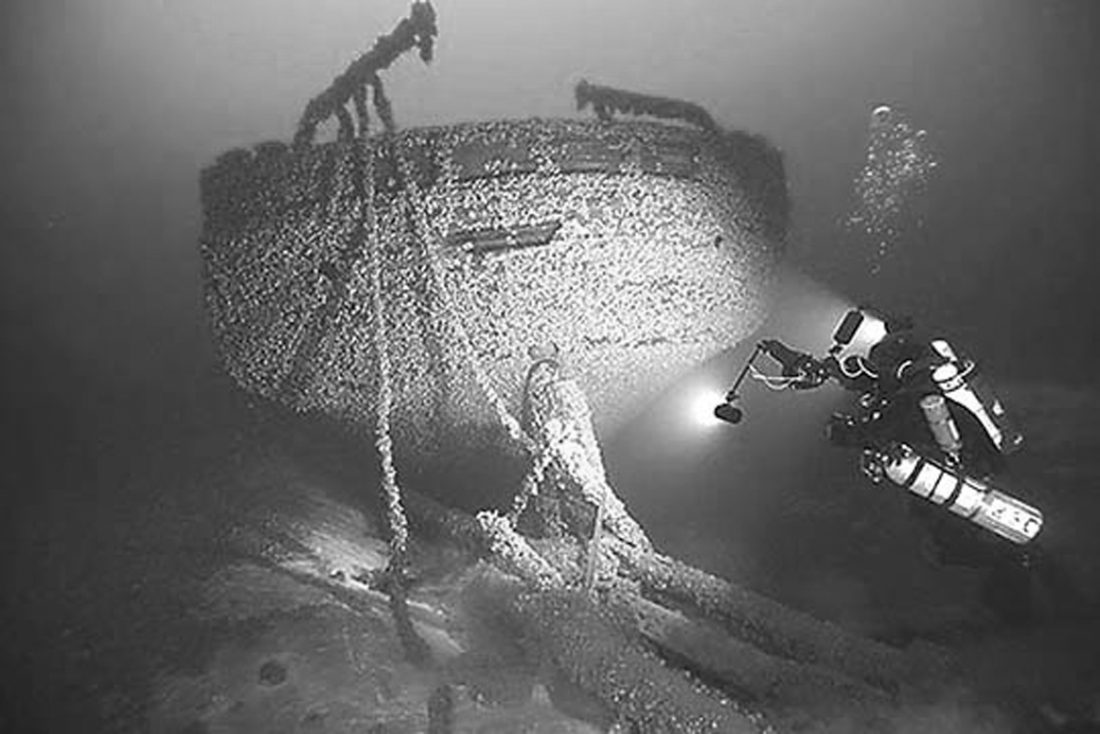 HOUGHTON – Two ships that collided and sank in Lake Michigan 140 years ago have been located, according to a release from Brendon Baillod, a Wisconsin-based Great Lakes maritime historian, researcher, and archivist.

The schooners Peshtigo and St. Andrew, both cargo vessels, were found 10 feet apart, in about 200 feet of water, in a remote area between Beaver Island and North Fox Island. The site was first discovered by Bernie Hellstrom, a long-time diver and explorer, from Boyne City, Michigan. Hellstrom was monitoring his Bottom-Penetrating Sounder, a sophisticated device that operates somewhat like a fish finder, when it detected a huge obstruction on the lake bed. In June 2019, Hellstrom used a custom-made camera system to view the obstruction, which revealed the remains of two large sailing ships.

The two vessels were only 10 feet apart, in an amazing state of preservation, their masts lying over each other, and a cargo of coal strewn around the site. A huge gash in one of the hulls clearly showed that the vessels had collided and sank quickly. Baillod, who is the president of the Wisconsin Underwater Archaeology Association, and Director-at-Large of the Association for Great Lakes Maritime History, stated Hellstrom’s find presented a real mystery, because no matching historical schooner collision was known within 50 miles of the find.

Experienced technical divers, John Janzen and John Scoles, were recruited to descend to the site, which exceeds the depth of most sport diving. Paul Ehorn, with a specialized dive boat, was called in to handle the technical diver surface support, the release states. During the deep, remote dive, Janzen and Scoles recorded amazing high-definition video of the site, which revealed evidence of a violent disaster.

The video, the release states, caused Baillod to re-examine a collision thought to have occurred over 50 miles away, on Lake Huron.

“For years, divers and historians had believed that the collision of the schooners had occurred in the eastern Straits of Mackinac,” states the release, “based on an 1857 Flying Eagle penny found in the mast step of a wreck attributed to the St. Andrews.”

Indeed, the website straitspreserve.com states: “The St. Andrew was a 135 2(-masted) schooner built in Milan OH in 1857. She was carrying corn from Chicago to Buffalo on her fateful voyage in 1878. The St. Andrew sank at night, June 26, after colliding (with) the schooner Peshtigo. Both were said to have sunk together, side by side, but the Peshtigo has never been located or identified.”

The Thursday, June 27, 1878, edition of the Detroit Free Press stated:

“A special dispatch to the Detroit Free Press from Port Huron, June 26, says: The schr. ST. ANDREW, bound down, with corn from Chicago, and the schr. PESHTIGO, bound up, with coal, collided last night in the straits about 5 miles from Cheboygan [sic]. Both vessels went to the bottom. The crew of the ST. ANDREW reached Cheboygan in a small boat today. The ST. ANDREW was owned by Henry McMorran and Capt. E. Fitzgerald, Sr., both of this city. She was insured for $9,000, $5,000 in the Detroit Fire and Marine on McMorran’s interest, $4,000 in a Buffalo company on Fitzgerald’s interest. No particulars concerning the PESHTIGO’s crew were obtained. They are probably safe, however. The PESHTIGO passed this port, bound up, Saturday. She was owned by A. English, of Chicago.

Upon re-examining the historical news accounts of the collision, Baillod found that many accounts placed the collision between Beaver Island and Charlevoix, in Lake Michigan, very near the location of Hellstrom’s discovery. One of those accounts came from the Port Huron Daily Times, the same day as the Detroit Free Press’ report, June 28, 1878:

“The schooner PESHTIGO and the schooner St. ANDREW collided at 1 o’clock Tuesday morning between Skillagalee light and the Beavers and both sunk. The cause of the disaster was smoky weather. Both sunk in 5 minutes. Both crews were rescued, the St. ANDREW’s by the Canadian propeller OCEAN. The St. ANDREW was built at Milan, Ohio, in 1857. She was owned by Capt. E. Fitzgerald, Sr., and Henry McMorran of this city. The crew of the PESHTIGO went aboard the schooner S.V.R. WATSON. Two crewmen of the PESHTIGO drowned. The latter’s spars were still above water.”

Subsequent dives and further investigation by Janzen and Scoles have confirmed that the ships are, in fact, the St. Andrews and Peshtigo, two iconic Great Lakes sailing vessels from the Civil War era. The Peshtigo was a giant for its time, a three-masted schooner measuring 161 feet long, and 384 tons. The St. Andrew was two-masted, 143 long, and 426 tons.

“These shipwreck sites are now important historical and archaeological resources,” Baillod’s release states, “and are protected by Michigan law from salvage or diver impact.”

Baillod now has a new challenge: to learn the identity of the sunken ship in the Straits that, until now, was believed to be the St. Andrew.