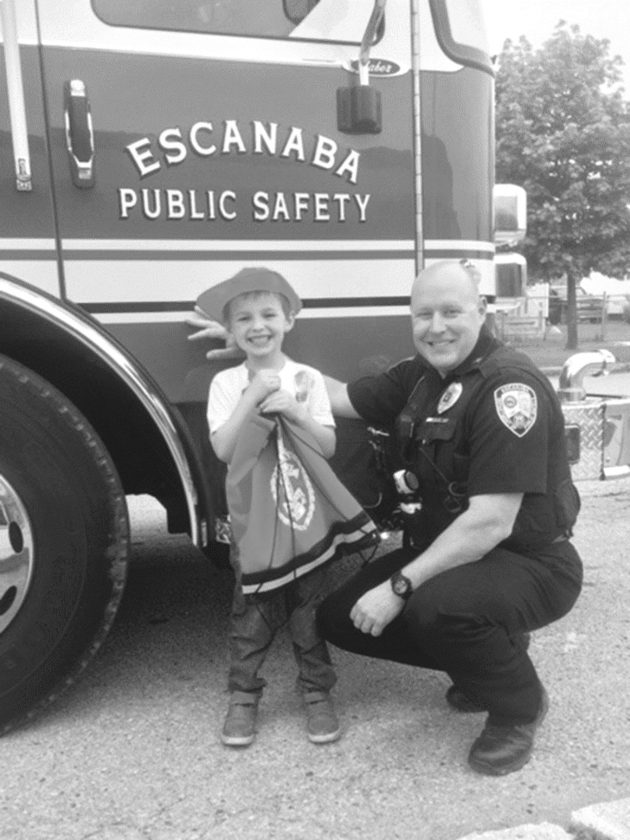 ESCANABA — Through having lunch with a police officer or getting a ride to school in a fire truck, the Escanaba Public Safety Department’s “Hero Program” aims to build better relationships between first responders and local children.

Escanaba Public Safety Det. Tabitha Marchese, who initiated the program, said it has been around since the 2016-17 school year.

“I wanted to develop a better relationship between law enforcement and the kids in the school,” she said.

“The idea is not only to develop that relationship with them, but also to kind of have them looking out for other people,” Marchese said.

She explained it’s the schools who handle drawing the students’ names. It’s a total of 10 kids a month that participate in the program.

Other fire departments and police agencies participate in EPSD’s program, as some students live outside of Escanaba city limits and Wells Township, and the Soo Hill Elementary School is also not within EPSD’s jurisdiction.

Marchese explained she has contacted every fire department within Delta County, so if a student lives within their jurisdiction, they can provide the ride to school in their own fire truck.

“The only departments we’ve had to use so far, for the fire part, is Ford River, Escanaba Township, Gladstone Public Safety and Cornell Township,” she said. “But all the departments in Delta County were okay with doing it, I just haven’t had any outside of (there).”

The other police agencies involved in the program are the Michigan State Police – Gladstone Post and the Delta County Sheriff’s Office, as Soo Hill falls under its jurisdiction.

“The Escanaba officers do the Escanaba schools that are in the city,” Marchese said.

Around 90 to 100 kids, depending if the school participates during the month of June, participate in the program every school year.

Marchese said overall the program has been a success.

“I do think it’s successful — just to see how excited the kids get when they’re drawn or even when we pick them up,” she said.

She added when kids are picked up by a fire truck, they get the opportunity to run the lights and spray water from the hose.

“They’re having fun and we get to have fun with them, so we get to share that experience and they kind of get to see us in a different light,” Marchese said.

When a police officer stops by at the school to have lunch with the student selected, the student chooses where the food comes from and has the option to eat the lunch one-on-one with the officer or to bring the officer into the cafeteria.

Marchese said the lunch brings opportunities for students to just talk with an officer and ask any questions they might have, which allows the students to view police officers as more approachable.

All of the lunches with police officers have been provided through the generosity of Gene’s Towing and Repair.