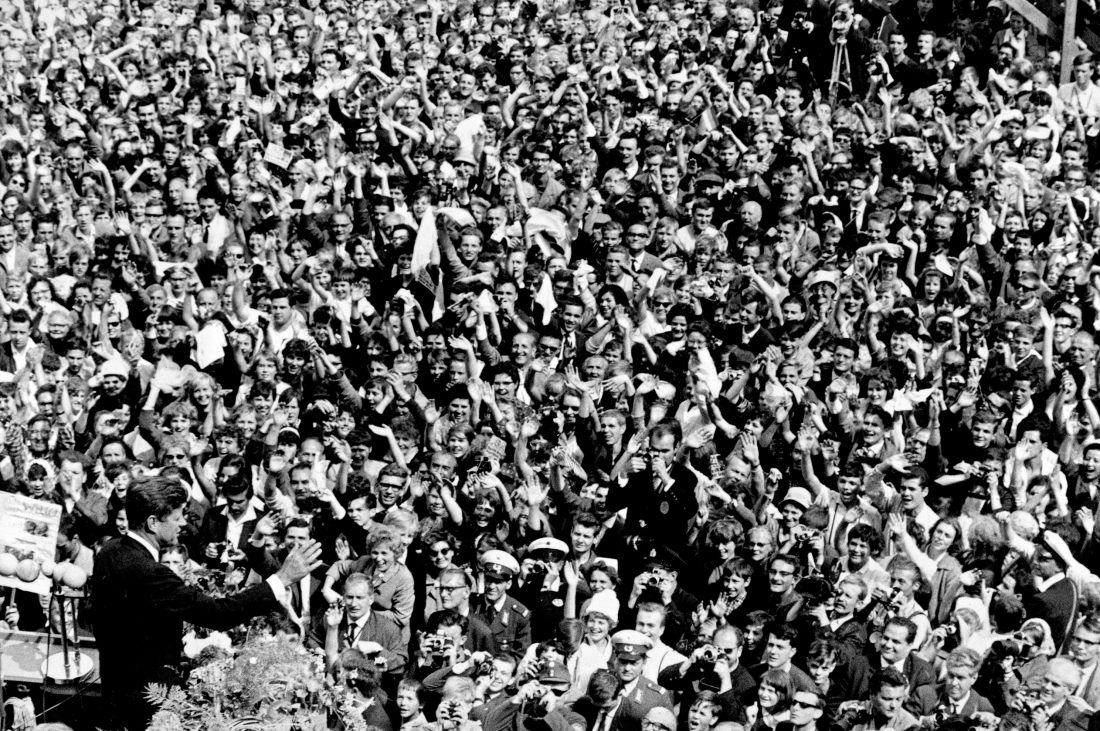 FILE - In this June 26, 1963 file photo, U.S. President John F. Kennedy, left, waves to a crowd of more than 300,000 gathered to hear his speech in the main square in front of Schoeneberg City Hall in then West Berlin. Berlin is celebrating Wednesday, June 26, 2013 the 50th anniversary of President John F. Kennedy's famed "Ich bin ein Berliner" speech  a pledge of support to the divided city on the Cold War's front line that still resonates in a much-changed world. (AP Photo, File)

On June 26, 1948, the Berlin Airlift began in earnest after the Soviet Union cut off land and water routes to the isolated western sector of Berlin.

In 1870, the first section of Atlantic City, New Jerseyís Boardwalk was opened to the public.

In 1917, the first troops of the American Expeditionary Force deployed to France during World War I landed in St. Nazaire.

In 1936, President Franklin D. Roosevelt was nominated for a second term of office by delegates to the Democratic National Convention in Philadelphia.

In 1963, President John F. Kennedy visited West Berlin, where he delivered his famous speech expressing solidarity with the city’s residents, declaring: ìIch bin ein Berlinerî (I am a Berliner).

In 1968, President Lyndon B. Johnson announced his choice of Abe Fortas to succeed the retiring Earl Warren as chief justice of the United States (however, Fortas later withdrew in the face of stiff Senate opposition).

In 1974, the supermarket price scanner made its debut in Troy, Ohio, as a 10-pack of Wrigleyís Juicy Fruit chewing gum costing 67 cents and bearing a Uniform Product Code (UPC) was scanned by a Marsh Supermarket cashier.

In 1977, 42 people were killed when a fire sent toxic smoke pouring through the Maury County Jail in Columbia, Tennessee. Elvis Presley performed his last concert at Market Square Arena in Indianapolis.

In 1996, the Supreme Court ordered the Virginia Military Institute to admit women or forgo state support.

In 2013, in deciding its first cases on the issue, the U.S. Supreme Court gave the nationís legally married gay couples equal federal footing with all other married Americans and also cleared the way for same-sex marriages to resume in California.

Ten years ago: At odds over how to strengthen the global economic recovery, Group of Eight leaders meeting in Canada did find common ground on foreign policy, condemning North Korea for the alleged sinking of a South Korean warship and endorsing a five-year exit timetable for Afghanistan. Ghana sent the U.S. packing from the World Cup in South Africa, eliminating the Americans in the second round.

Five years ago: President Barack Obama, Vice President Joe Biden and their wives visited Charleston, South Carolina, where nine black churchgoers had been shot to death; Obama eulogized one of the victims, the Rev. Clementa Pinckney, who was the pastor of the church and also a state senator. Richard Matt, one of two convicted murderers whoíd escaped from the Clinton Correctional Facility in upstate New York, was shot and killed by authorities in a wooded area 30 miles from the prison; David Sweat remained at large (he was arrested two days later). A gunman killed 38 tourists on a beach in Sousse (soos), Tunisia, in an attack later claimed by the Islamic State group. Former Russian Prime Minister Yevgeny Primakov, 85, died in Moscow.

One year ago: Meeting for the first time on the debate stage in the 2020 presidential campaign, ten Democrats railed against an economy and an administration that they argued exist only for the rich, as they embraced income inequality as a defining theme in their fight to deny Donald Trump a second term in office. (Ten other Democrats would meet in a separate debate a day later.)