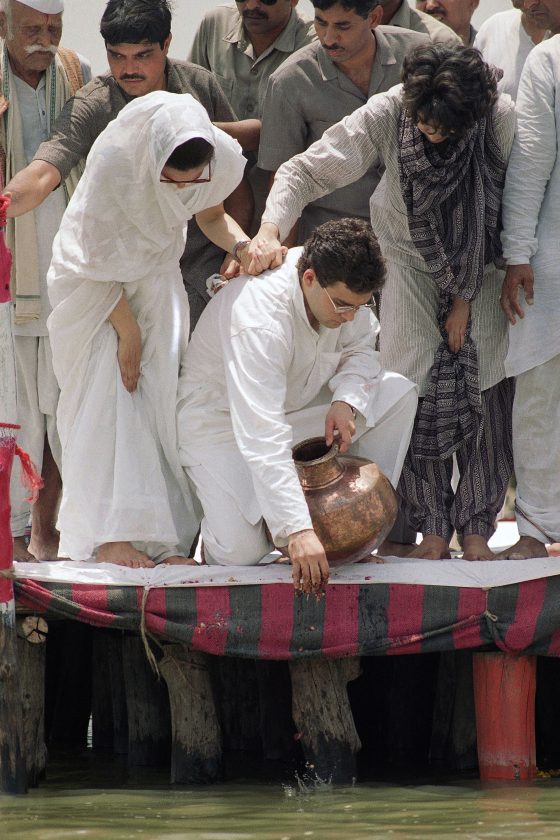 Rahul Gandhi drops his father?s ashes into the Ganges River at Allahabad, Tuesday, May 28, 1991 as his mother, left, and his sister clasp hands in mutual support in the final rite for the slain former Indian Prime Minister. Rajiv Gandhi was killed in a bomb blast while campaigning for his Congress for his Congress Party on May 21. (AP Photo/Mark Lennihan)

On May 21, 1927, Charles A. Lindbergh landed his Spirit of St. Louis monoplane near Paris, completing the first solo airplane flight across the Atlantic Ocean in 33 1/2 hours.

In 1542, Spanish explorer Hernando de Soto died while searching for gold along the Mississippi River.

In 1868, Ulysses S. Grant was nominated for president by the Republican national convention in Chicago.

In 1892, the opera “Pagliacci,” by Ruggero Leoncavallo, premiered in Milan, Italy.

In 1910, a year-old Jewish settlement near the port city of Jaffa adopted the name Tel Aviv (Hebrew for “Hill of Spring”).

In 1932, Amelia Earhart became the first woman to fly solo across the Atlantic Ocean as she landed in Northern Ireland, about 15 hours after leaving Newfoundland.

In 1941, a German U-boat sank the American merchant steamship SS Robin Moor in the South Atlantic after the ship’s passengers and crew were allowed to board lifeboats.

In 1972, Michelangelo’s Pieta, on display at the Vatican, was damaged by a hammer-wielding man who shouted he was Jesus Christ.

In 1979, former San Francisco City Supervisor Dan White was convicted of voluntary manslaughter in the slayings of Mayor George Moscone and openly gay Supervisor Harvey Milk; outrage over the verdict sparked rioting. White was sentenced to seven years and eight months in prison; he ended up serving five years and took his own life in 1985.

In 1991, former Indian Prime Minister Rajiv Gandhi was assassinated during national elections by a suicide bomber.

In 2018, Syria’s military captured an enclave in southern Damascus from Islamic State militants after a monthlong battle, bringing the entire capital and its suburbs under full government control for the first time since the civil war began in 2011.

Five years ago: Four Malaysian navy ships began searching for stranded boat people in the first official rescue operation since desperate migrants started washing up on Southeast Asia’s shores. The Family Research Council said it had accepted the resignation of Josh Duggar in the wake of the reality TV star’s apology for unspecified bad behavior as a young teen. (Duggar later admitted molesting five underage girls as a teenager, including two of his sisters, cheating on his wife and being addicted to pornography; those revelations led to the cancellation of the TLC show “19 Kids and Counting.”)

One year ago: As directed by President Donald Trump, former White House Counsel Donald McGahn defied a subpoena from the House Judiciary Committee to testify; McGahn had been a key figure in special counsel Robert Mueller’s investigation, describing ways in which the president sought to curtail the probe. Angered by the empty chair in the hearing room, a growing number of House Democrats pushed for impeachment proceedings against Trump. Sherpa mountaineer Kami Rita extended his record for successful climbs of Mount Everest, ascending the world’s highest peak for a 24th time.