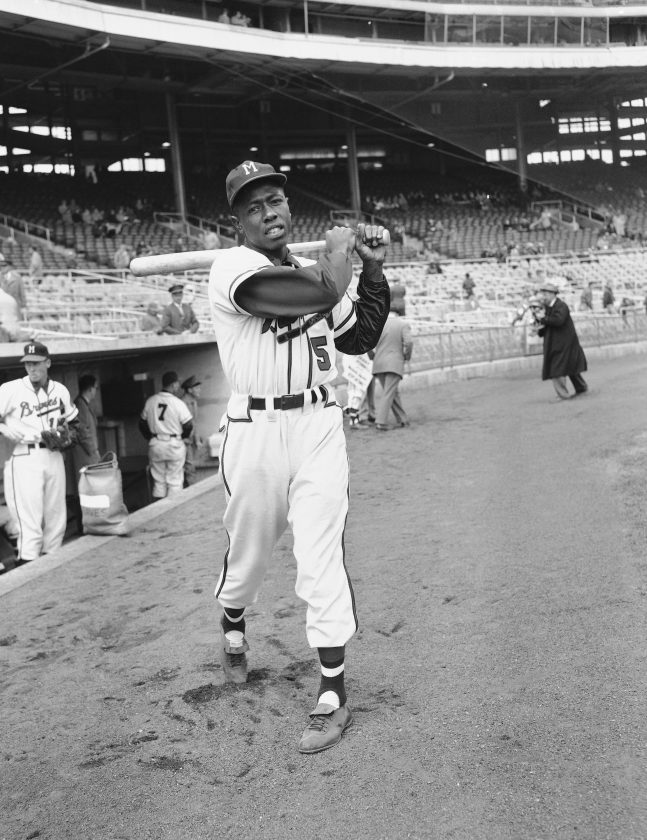 Henry Hank Aaron, rookie outfielder of the Milwaukee Braves, shown in a batting pose in Milwaukee on May 10, 1954. (AP Photo/Dwayne Newton)

On April 23, 1616 (Old Style calendar), English poet and dramatist William Shakespeare died in Stratford-upon-Avon on what has traditionally been regarded as the 52nd anniversary of his birth in 1564.

In 1898, Spain declared war on the United States, which responded in kind two days later.

In 1954, Hank Aaron of the Milwaukee Braves hit the first of his 755 major-league home runs in a game against the St. Louis Cardinals. The Braves won, 7-5.

In 1968, student protesters began occupying buildings on the campus of Columbia University in New York; police put down the protests a week later. The Methodist Church and the Evangelical United Brethren Church merged to form the United Methodist Church.

In 1969, Sirhan Sirhan was sentenced to death for assassinating New York Sen. Robert F. Kennedy. The sentence was later reduced to life imprisonment.

In 1987, 28 construction workers were killed when an apartment complex being built in Bridgeport, Connecticut, suddenly collapsed.

In 1988, a federal ban on smoking during domestic airline flights of two hours or less went into effect.

In 1996, a civil court jury in The Bronx, New York, ordered Bernhard Goetz to pay $43 million to Darrell Cabey, one of four young men he’d shot on a subway car in 1984.

In 1998, James Earl Ray, who confessed to assassinating the Rev. Martin Luther King Jr. and then insisted he’d been framed, died at a Nashville, Tennessee, hospital at age 70.

In 2005, the recently created video-sharing website YouTube uploaded its first clip, “Me at the Zoo,” which showed YouTube co-founder Jawed Karim standing in front of an elephant enclosure at the San Diego Zoo.

Ten years ago: Arizona Gov. Jan Brewer signed the nation’s toughest illegal immigration law, saying “decades of inaction and misguided policy” had created a “dangerous and unacceptable situation”; opponents said the law would encourage discrimination against Hispanics. The Coast Guard suspended a three-day search for 11 workers missing after an explosion rocked the Deepwater Horizon oil platform in the Gulf of Mexico.

Five years ago: Blaming the “fog of war,” President Barack Obama revealed that U.S. drone strikes in Pakistan had inadvertently killed an American and an Italian, two hostages held by al-Qaida, as well as two other Americans who had leadership roles with the terror network. Former CIA Director David Petraeus, whose career was destroyed by an extramarital affair with his biographer, Paula Broadwell, was sentenced in Charlotte, North Carolina, to two years’ probation and fined $100,000 for giving her classified material while she was working on the book. The Senate voted 56-43 to confirm Loretta Lynch as U.S. attorney general.

One year ago: President Donald Trump met with Twitter CEO Jack Dorsey, hours after bashing the company and accusing it of not treating him well because he’s a Republican. The S&P 500 hit an all-time high, closing at 2,933.68 and marking the stock market’s complete recovery from a nosedive at the end of 2018. Sri Lanka’s president gave the country’s military sweeping police powers in the wake of the Easter Sunday church and hotel bombings that killed more than 250 people.