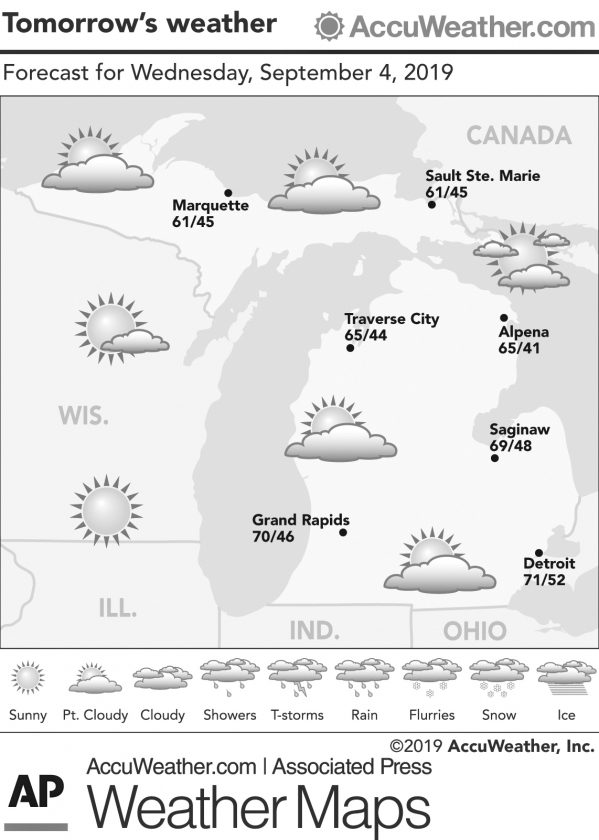 Marquette and vicinity: Today, breezy, warmer. Showers and a chance of thunderstorms in

the morning, then a chance of showers and thunderstorms in the afternoon. Highs 65 to 70. South winds 10 to 20 mph becoming west 15 to 25 mph in the afternoon. Gusts up to 40 mph. Chance of rain 100 percent. Tonight, a chance of rain showers in the evening, then a slight chance of rain showers overnight. Cloudy. Lows around 45 inland to around 51 at the shore. Northwest winds 5 to 15 mph inland, except northwest 15 to 25 mph near the shore. Gusts up to 35 mph in the evening. Chance of rain 50 percent. Wednesday, sunny. Highs around 63. Northwest winds 5 to 10 mph. Wednesday night, mostly clear. Lows 39 to 44 inland to around 51 at the shore. Light winds.

Temperatures: The average temperature Monday at the National Weather Service office in Negaunee Township was 51 degrees, 10 degrees below normal. The high Monday was 59 degrees and the overnight low was 43 degrees.

Marquette and vicinity: Saturday, warmer. Mostly sunny in the morning then becoming mostly cloudy. Highs around 30. ... 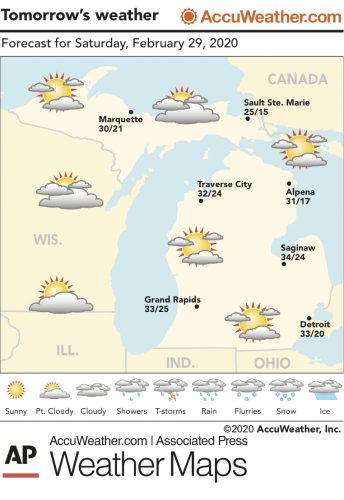