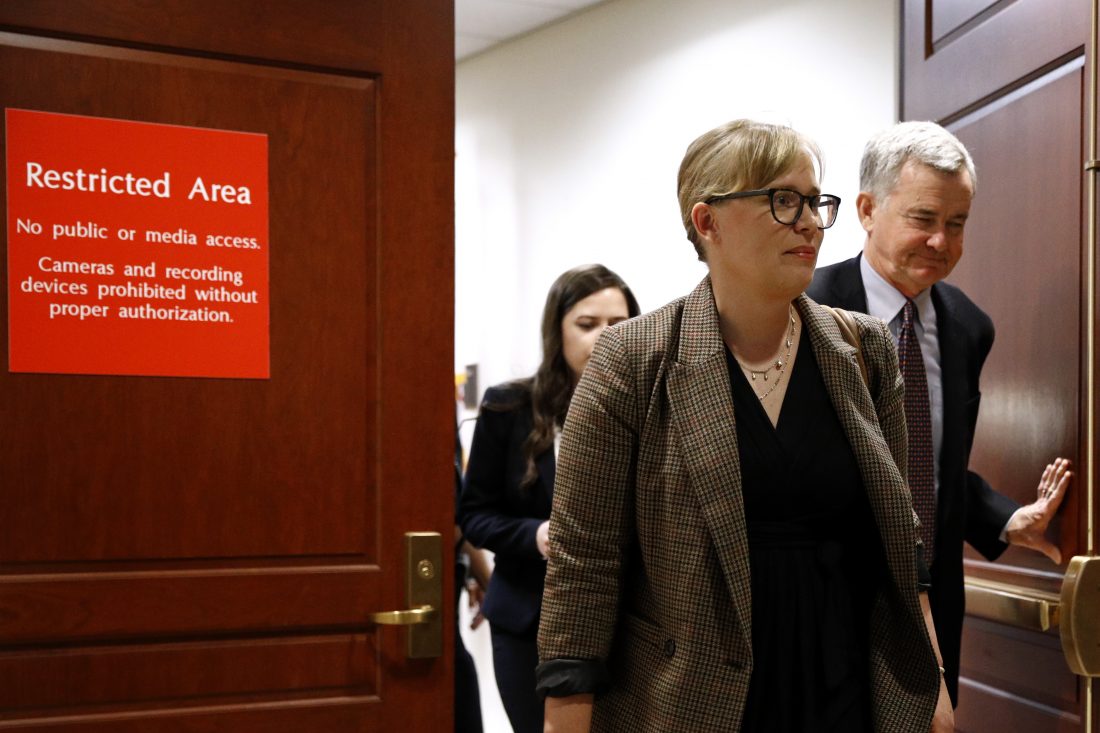 Catherine Croft, a State Department adviser on Ukraine, departs a secure area of the Capitol after a closed door meeting where she testified as part of the House impeachment inquiry into President Donald Trump, Wednesday, Oct. 30, 2019, on Capitol Hill in Washington. (AP Photo/Patrick Semansky)

WASHINGTON (AP) — The view among the national security officials was unanimous: Military aid to Ukraine should not be stopped. But President Donald Trump’s acting chief of staff thought otherwise.

As the aid was being blocked this summer, Ukraine officials began quietly asking the State Department about the hold-up. The concern was clear for the young democracy battling an aggressive Russia.

“If this were public in Ukraine it would be seen as a reversal of our policy,” said Catherine Croft, the special adviser for Ukraine at State, who fielded the inquiries from the Ukrainians.

Croft’s remarks were among the transcripts released Monday from the House impeachment inquiry of President Donald Trump.

And they begin to chisel away at a key Republican defense of Trump. Allies of the president say Trump did nothing wrong because the Ukrainians never knew the aid was being delayed.

Eventually, the White House released its hold and the funds were sent to the ally.

The impeachment inquiry is looking at whether Trump violated his oath of office by holding back the congressionally approved funds while he asked the new Ukraine President Volodymyr Zelenskiy for a favor– to investigate political rival Joe Biden’s family and the 2016 U.S. presidential election.

Transcripts of testimony from closed-door interviews with Croft and another Ukraine specialist at State, Christoper Anderson, as well as the Defense Department’s Laura Cooper, come as House Democrats are pushing ahead to this week’s live public hearings.

Cooper told investigators that, in a series of July meetings at the White House, she came to understand that Trump’s acting chief of staff, Mick Mulvaney, was holding up the military aid for the U.S. ally.

“There was just this issue of the White House chief of staff has conveyed that the president has concerns about Ukraine,” she said.

When she and others tried to get an explanation, they found none.

“We did not get clarification,” she said.

“My sense is that all of the senior leaders of the U.S. national security departments and agencies were all unified in their — in their view that this assistance was essential,” said Cooper, an assistant defense secretary. “And they were trying to find ways to engage the President on this.”

Croft and Anderson testified about the oversized reach of Trump lawyer Rudy Giuliani into foreign policy on Ukraine in unsettling ways as he portrayed Zelenskiy’s new government as an “enemy” of Trump.

Croft told investigators of her “trepidation” of taking on the role in spring of adviser to the special envoy to Ukraine,

Kurt Volker, because she worried that Giuliani was influencing Trump to change U.S. policy toward the ally.

She said she theorized that by “painting sort of Ukraine as being against Trump” it could help the president “distract from a narrative” that Russia had interfered in the 2016 U.S. election to help him.

Anderson, who held the special adviser role before Croft, said, “I had the fear that if Giuliani’s narrative took hold, that the Ukrainian Government was an enemy of the President, then it would be very hard to have high-level engagement.”

He said Volker had warned him, “Giuliani is not moving on to other issues, and so this might still be a problem for us moving forward.” 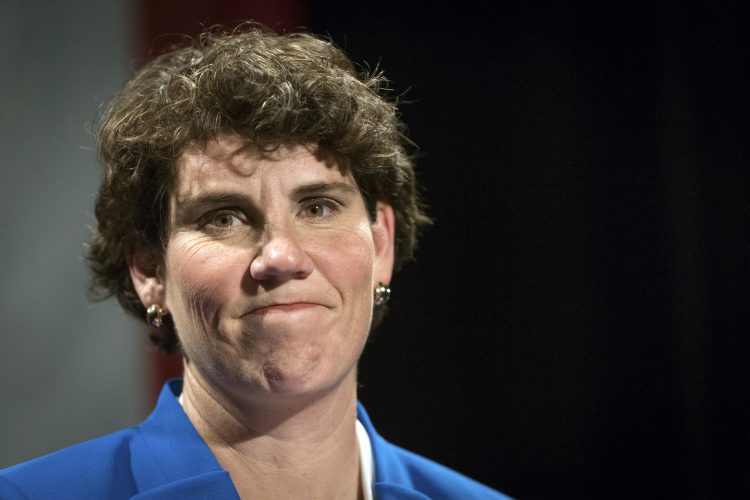 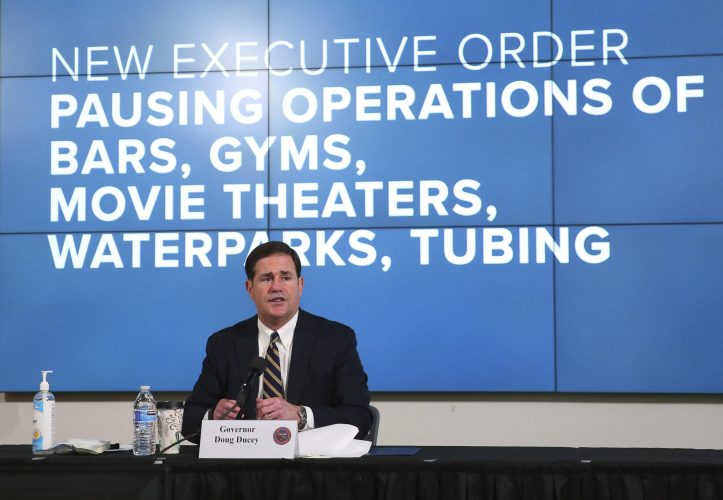 As virus roars back, so do signs of a new round of layoffs 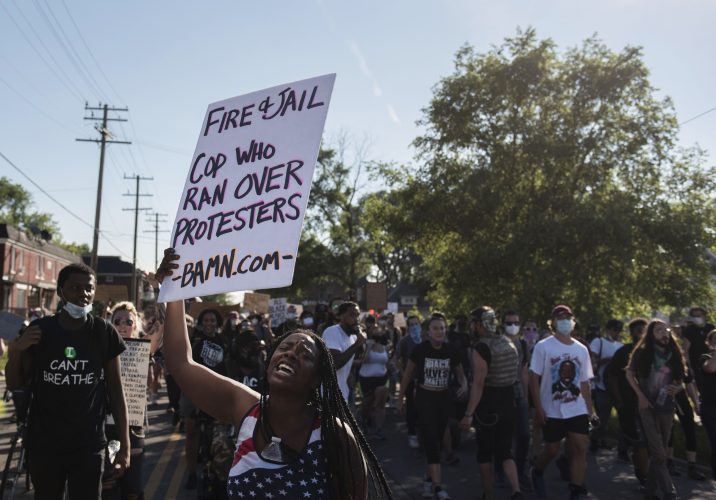 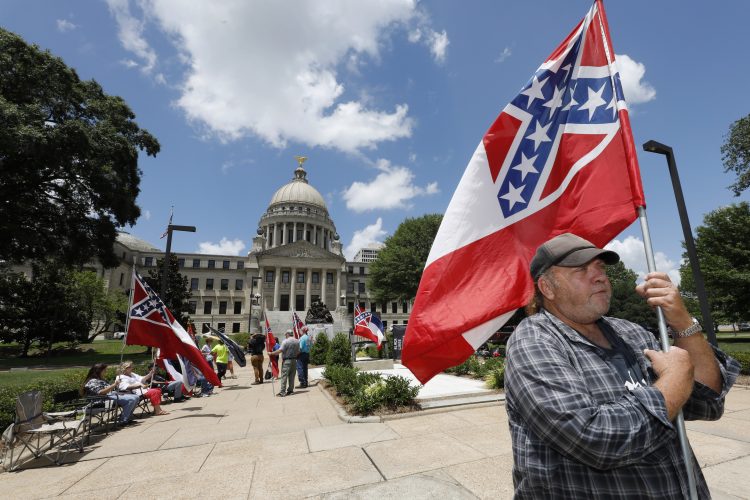 MARGATE, Fla. (AP) — This was not one of those delivery videos that some pregnant moms plan for. A Florida ...

Should Wayne’s name be removed?

SANTA ANA, Calif. (AP) — In the latest move to change place names in light of U.S. racial history, leaders of ...