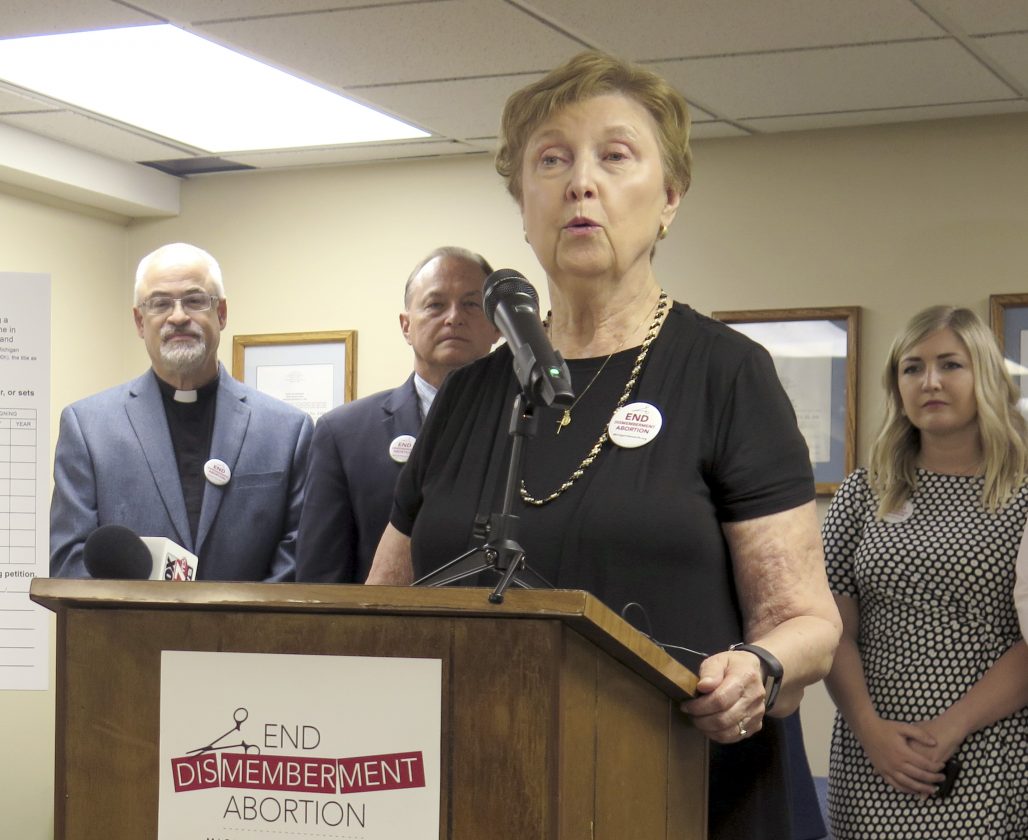 FILE - In this June, 26, 2019 file photo, Barbara Listing, president of Right to Life of Michigan, joins other anti-abortion advocates to officially launch a ballot drive to restrict a common second-trimester abortion procedure opponents call "dismemberment," and known medically as dilation and evacuation, during a news conference, in Lansing, Mich. Michigan's elections bureau says the group failed to collect enough petitions to put veto-proof legislation before the Republican-led Legislature that would prohibit a second-trimester abortion procedure. The June 15, 2020 report was a blow to the Michigan Values Life committee. (AP Photo/David Eggert File)

Staff in the elections bureau, however, estimated that only about 333,000 of the signatures were valid and that the effort came 7,276 signatures short. A 500-signature sample had duplicates, signers with an invalid voter registration status and other errors.

The staff recommended that the bipartisan Board of State Canvassers — split between two Democrats and two Republicans — deny certification when it meets Thursday.

Right to Life of Michigan, the main organizer of the initiated bill, wants to ban dilation and evacuation — which it refers to as “dismemberment.” Abortion-rights advocates say the procedure is safe and physicians should not face prosecution for using it.

The method, in which the fetus is removed in pieces with a surgical instrument, was used in 2,076, or 7.6%, of abortions in the state last year. It accounted for more than half of all second-trimester abortions, including 84% that were performed after the 16th week of pregnancy.

Right to Life of Michigan President Barbara Listing said she is “extremely disappointed.” The ballot committee hopes to persuade canvassers that some signatures that were challenged by an abortion rights group are “obviously good,” she said.

The elections bureau said the Coalition to Protect Access to Care, which is affiliated with Planned Parenthood Advocates of Michigan, alleged that 66 signatures in the 500-signature sample were invalid. Staff rejected 20 challenges, said 24 overlapped ones they had already flagged and accepted 22.

They later partially agreed with the anti-abortion group’s rebuttal and accepted two signatures as valid.

Democratic Gov. Gretchen Whitmer has vowed to veto identical legislation that Republicans proposed as normal bills. But under the state constitution, a governor’s veto can effectively be bypassed through the initiative process.

“The Bureau of Elections found the same severe deficiencies in the Right to Life petitions as our staff and volunteers did, and we hope the Board of Canvassers follows their recommendation and declines to certify,” said Angela Vasquez-Giroux, spokeswoman for Planned Parenthood Advocates of Michigan.

Dilation and evacuation has been banned by 12 states. Bans are in effect in two but are permanently or temporarily enjoined in nine states because of legal challenges. North Dakota’s law will become effective if a federal appeals court or the U.S. Supreme Court allows its enforcement.

The Michigan initiative has an exception to protect a pregnant woman’s life, but would not allow the dilation and evacuation procedure to be used in cases of rape, incest, a severe fetal diagnosis or when the woman faces a non-life-threatening health risk.

LANSING — Do you have the juice to drive along Michigan streets, roads and highways? The state Department of ...

WAYLAND, Mich. (AP) — Two western Michigan boys who found a wallet filled with cash are being praised for turning ...

TRAVERSE CITY — An elected official in a mostly white county in northern Michigan who used a racist slur prior ...

CHESTONIA TOWNSHIP, Mich. (AP) — Two snowmobilers have won a key decision in a lawsuit over injuries in an ...