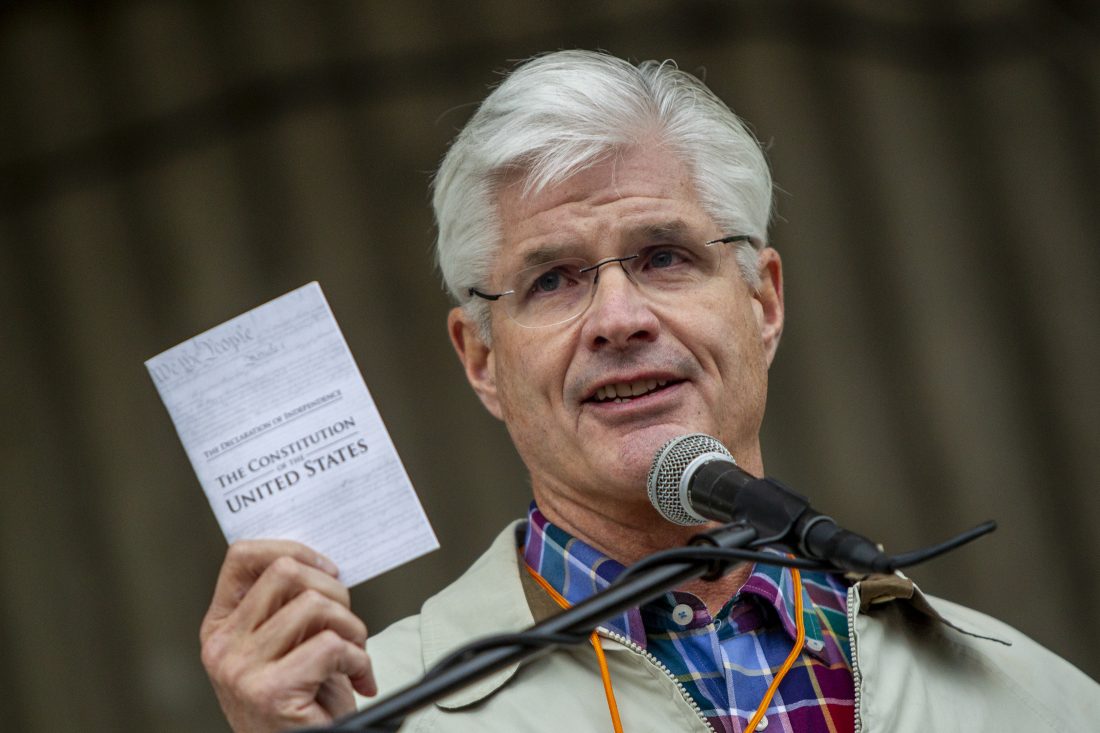 FILE - In this Monday, May 18, 2020 file photo, Michigan Senate Majority Leader Mike Shirkey, R-Clark Lake, holds a copy of the Constitution while speaking during the "American Patriot Rally-Sheriffs speak out" event at Rosa Parks Circle in downtown Grand Rapids, Mich. Shirkey said Michigan Gov. Gretchen Whitmer lied and engaged in a cover-up by asking for the removal of a social media post about her husband's attempt to get his boat in the water during the coronavirus pandemic, only to later acknowledge he did drop her name as a joke. (Cory Morse/The Grand Rapids Press via AP, File)

LANSING (AP) — A Republican legislative leader said Wednesday that Democratic Gov. Gretchen Whitmer “lied” and engaged in a “cover-up” by requesting the removal of a social media post about her husband’s attempt to get his boat in the water during the coronavirus pandemic, only to later acknowledge he did drop her name as a joke.

The governor confirmed Tuesday that her husband, Marc Mallory, called a dock company last week before he traveled to their home in the Elk Rapids area, after she had urged people to “think long and hard” about visiting the region.

Senate Majority Leader Mike Shirkey questioned why her staff contacted his office Friday to successfully push Republican Sen. Tom Barrett to delete his Facebook post about Mallory. The post was based on a post by the owner of NorthShore Dock, who said his staff took a call from Mallory asking if his boat could be put in the water before the Memorial Day weekend.

When Mallory was told there was no chance, Tad Dowker wrote, Mallory replied, ‘I am the husband to the governor, will this make a difference?’” according to The Detroit News. NorthShore Dock subsequently said on Facebook that Mallory was respectful and understood why the company could not quickly get his boat in the water.

“The governor lied. Not only did she lie, but she directed her staff to lie on her behalf in order to cover up her own lies,” Shirkey said in statements Republican senators: Governor lied about husband’s boat call from the Senate floor. He said Whitmer’s staff was “emphatic that the story was false and that it should be removed.”

Whitmer spokeswoman Tiffany Brown said Shirkey’s comment were “incorrect and unfair, and frankly, he owes the governor an apology. She has been completely honest about the situation and she never directed her staff to mislead anyone or to contact his office.”

The relationship between Shirkey, of Clarklake, and Whitmer has been bad for some time, even before her statewide stay-at-home orders to curb COVID-19 prompted a lawsuit from the GOP-controlled Legislature.

Last year, he used the word “bat” and an expletive to call her “crazy.” A month ago, her office broke decorum and released to the media emails detailing Shirkey’s proposal related to extensions of her declared coronavirus emergency.

Barrett, of Charlotte, said he took down his post at the request of the governor’s office out of an abundance of caution but quickly re-verified the story over the weekend.

“Her staff moved from expressly denying it to the Senate leadership to not engaging on the issue at all. Then by Tuesday, she tried to cover it up as a joke,” he said. “Now the governor has impugned the credibility of a small business owner in northern Michigan and impugned the integrity of me, and I take my integrity very seriously.”

Brown confirmed that one of Whitmer’s staffers reached out to Shirkey’s office on “staff’s own initiative (regarding not posting about the governor’s family) based on an assumption that was obviously incorrect. When it became clear, the staff member called, explained and apologized.”