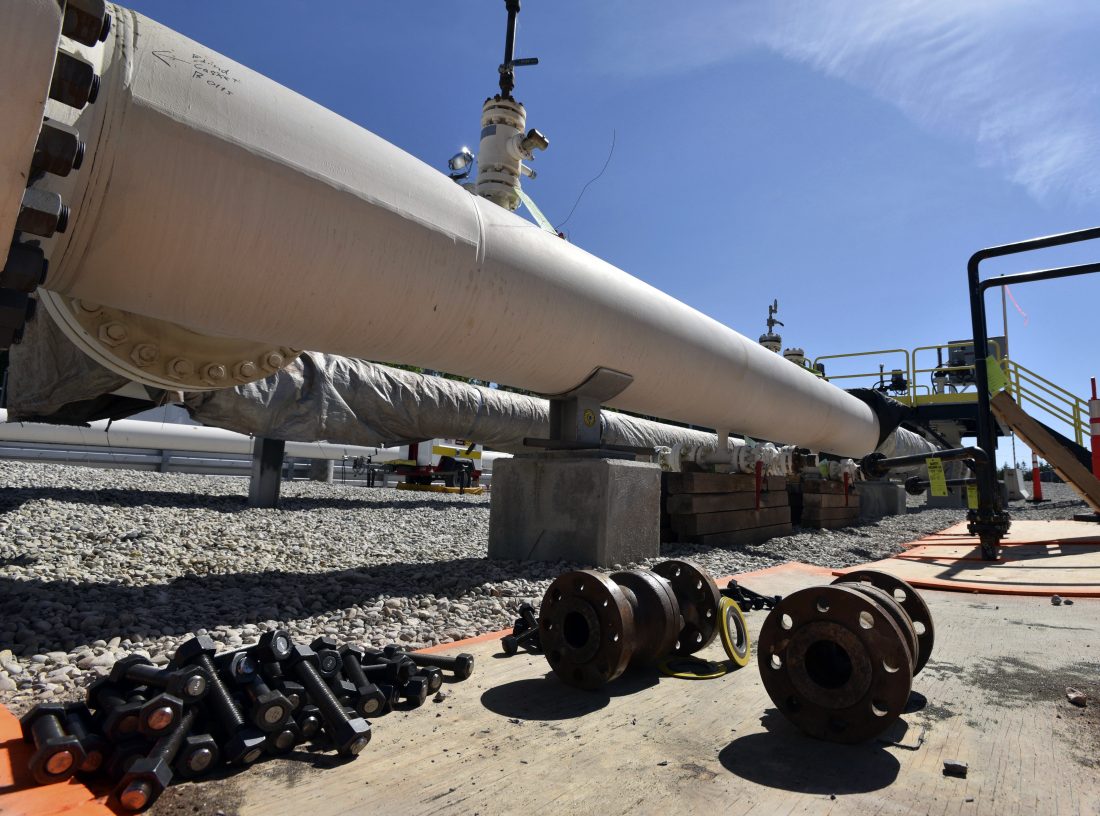 FILE - In this June 8, 2017 file photo, fresh nuts, bolts and fittings are ready to be added to the east leg of the pipeline near St. Ignace as Enbridge prepares to test the east and west sides of the Line 5 pipeline under the Straits of Mackinac in Mackinaw City, Mich. Enbridge Inc. applied Wednesday, April, 2020, for state and federal authorization to construct an oil pipeline tunnel beneath the Michigan waterway that connects two of the Great Lakes. (Dale G Young/Detroit News via AP)/Detroit News via AP)

TRAVERSE CITY — Enbridge Inc. applied Wednesday for state and federal authorization to construct an oil pipeline tunnel beneath the Michigan waterway that connects two of the Great Lakes.

The Canadian company wants to build a roughly 4-mile-long (6.4-kilometer-long) tunnel beneath the Straits of Mackinac. It would replace the underwater segment of Line 5, a pipeline that runs between Superior, Wisconsin, and Sarnia, Ontario.

Enbridge submitted a joint application to the Michigan Department of Environment, Great Lakes and Energy and the U.S. Army Corps of Engineers. Approval from both is needed for the project to go forward.

“The Great Lakes Tunnel Project unequivocally is the most practical, long-term solution to delivering a secure energy supply to the region while enhancing environmental safeguards in the Straits,” said Amber Pastoor, the project manager.

Line 5 each day carries 23 million gallons (87 million liters) of crude oil and natural gas liquids used for propane. It divides into two pipes beneath the straits, which links Lakes Michigan and Huron — an ecologically sensitive area and popular tourist destination.

Environmental contend Line 5 is vulnerable to leaks after lying on the bottom of the straits for 67 years. Enbridge says it is in good condition and is monitored closely but agreed to spend $500 million on a replacement that would be housed in a tunnel drilled through bedrock underneath the straits.

The Michigan Court of Claims last year upheld an agreement between the company and former Republican Gov. Rick Snyder to construct the tunnel, rejecting a challenge from Democratic Attorney General Dana Nessel.

Nessel has filed a separate lawsuit demanding the shutdown of the existing Line 5 as a public nuisance and environmental hazard.

Democratic Gov. Gretchen Whitmer also has spoken against the pipeline and tried unsuccessfully to negotiate an accelerated timeline for building the tunnel, which Enbridge plans to start next year and finish in 2024.

In view of stay-at-home policies resulting from the coronavirus pandemic, “we are adapting our processes to handle these and other permit requests in a way that protects public health, complies with the law, and allows meaningful public participation and input,” Dean said.

Arup, a London-based engineering and consulting firm, is designing the tunnel. A partnership between Livonia, Michigan-based Jay Dee Contractors and Japan-based Obayashi Corp. will handle construction.

Plans call for beginning work on the Lower Peninsula side of the straits and heading north, the company said, adding that the 25-acre (10-hectare) work site would maintain a 115-foot (35-meter) buffer from the Lake Michigan shoreline.

The north end of the tunnel boring will be on a 16-acre (6.5-hectare) parcel that Enbridge owns. The buffer space on that side of the straits will be at least 50 feet (15.2 meters), the company said.