Coronavirus is ‘starting to weaken’ in Detroit, mayor says 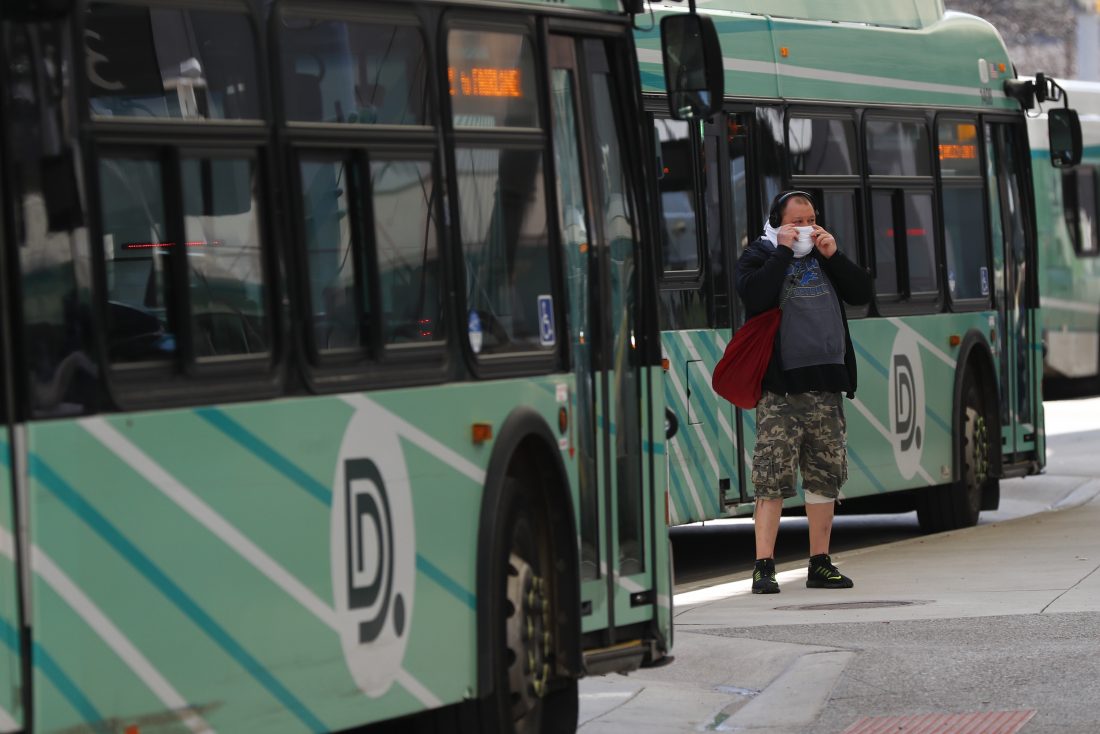 A rider adjusts his face covering while waiting for a bus in Detroit, Wednesday, April 8, 2020. Detroit buses will have surgical masks available to riders starting Wednesday, a new precaution the city is taking from the new coronavirus COVID-19. (AP Photo/Paul Sancya)

DETROIT — The mayor of Detroit said Wednesday that the coronavirus is “starting to weaken” in Michigan’s largest city, but he also pleaded with residents to keep the momentum going by wearing masks and avoiding large groups.

Health officials, meanwhile, reported that Michigan has had 20,346 confirmed COVID-19 cases and 959 deaths from the disease caused by the coronavirus. There were fewer new cases and deaths reported Wednesday than on Tuesday.

“We are starting to weaken it,” Duggan said. “If we don’t give it new energy by clustering we are going to be successful.”

Cooler weather could help discourage outdoor gatherings: After temperatures reached 70 degrees in parts of the state Wednesday, they were expected to top out in the 40s and 50s starting Thursday and stretching into next week.

The first patients at a makeshift hospital inside Detroit’s TCF Center should be arriving this week. Duggan, however, said area hospitals told him that the number of new admissions compared to the number of discharged patients was “flattening out.”

“It’s going up more slowly than what we had seen. … If we do this right, we might not have to have a thousand beds at the TCF Center,” said the mayor, a former hospital executive.

Duggan said he’s been encouraged to see people wearing face masks and keeping their distance from each other. Masks are being distributed on buses. Detroit has 6 percent of Michigan’s population but has had more than 25% of the state’s virus cases and deaths.

The DTE Energy Foundation said it supplied 100,000 masks to area hospitals Wednesday and has 2 million more in the pipeline.

A local leader in northern Michigan is deeply troubled, saying activity in his community is similar to what’s seen around the Fourth of July, as people visit their second homes and put older year-round residents at greater risk of contracting the virus.

James Janisse, village president in Elk Rapids, urged the governor to bar people from traveling back and forth to second homes. He’s the latest official to express concern about a migration to northern Michigan from virus hot spots.

“People arriving here are not self-isolating. They are busy in our grocery and hardware stores and gas stations, increasing risk for our vulnerable population, in a county with no ICU beds and limited regional medical resources,” Janisse said in a letter to Whitmer.

A judge ordered the release of a 56-year-old woman who feared she would catch the coronavirus while being housed by U.S. immigration authorities in the Calhoun County jail. Separately, the American Civil Liberties Union filed a lawsuit to try to win the release of others like Janet Malam who have health problems and are in custody while awaiting deportation hearings.

The lawsuit was filed on behalf of people held by the government in jails in St. Clair, Calhoun and Monroe counties. The ACLU said they should be allowed to go home to await court hearings. Immigration and Customs Enforcement said it has been reviewing the cases of detainees who are vulnerable to the virus and releasing people daily.

U.S. Sen. Gary Peters, of Michigan, wants the federal government to pay one-time bonuses of up to $25,000 for people working at hospitals, grocery stores, pharmacies and other essential workplaces. The Democrat, who is up for re-election, likened it to military hazard pay.

“They should be compensated for taking additional risks for themselves as well as for their families,” said Peters, who also is proposing $15,000 hiring bonuses for health care workers and first responders at places with significant staff shortages.

The state Department of Health and Human Services began reporting how many people have recovered and how many are hospitalized, including the number of patients in critical care and on ventilators. As of Friday, 56 people with confirmed cases were still alive 30 days after the onset of illness. That information will be released weekly. More than 3,800 patients with COVID-19 were in a hospital as of Wednesday, about 1,400 of them on ventilators. Those figures, along with testing data broken down by region, will be updated daily.