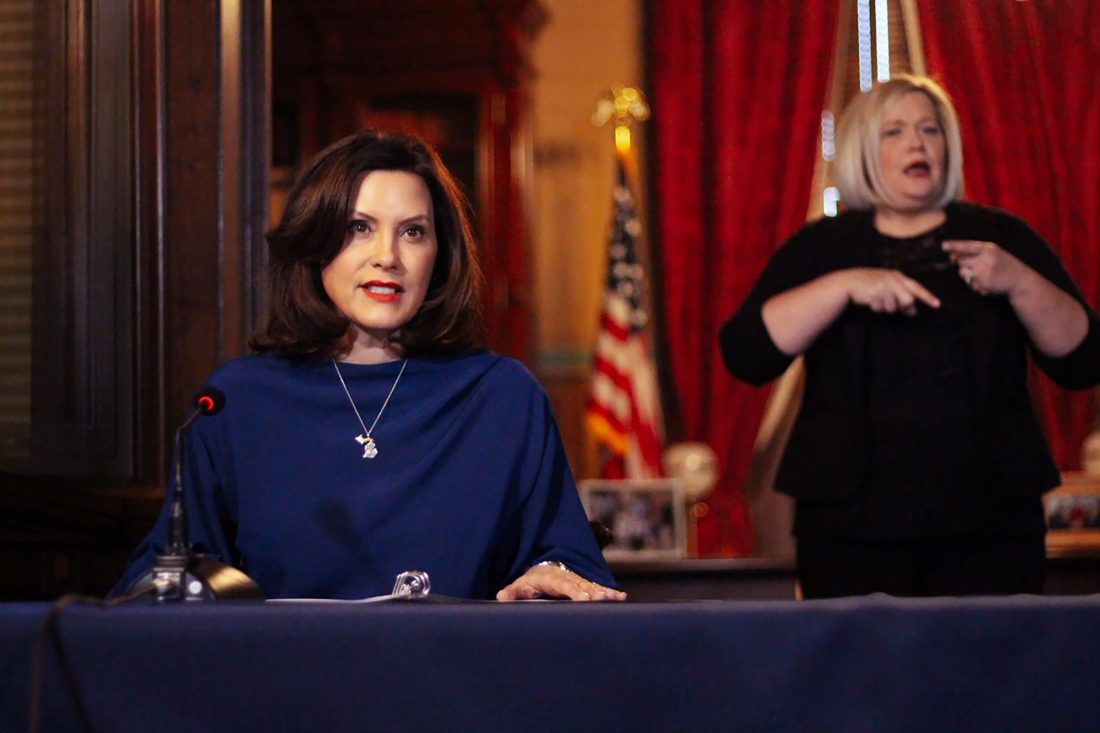 In a pool photo provided by the Michigan Office of the Governor, Michigan Gov. Gretchen Whitmer addresses the state during a speech in Lansing, Mich., Monday, March 30, 2020. The governor said she suspended state hiring and promotions and vetoed $80 million in new spending in order to steer money to fighting the coronavirus. At the same time, Whitmer said she signed laws with $150 million for the state's response. She said it's too early to know how the economic slowdown related to the virus will affect state revenue but the impact "is going to be real." (Michigan Office of the Governor via AP, Pool)

LANSING — Gov. Gretchen Whitmer on Monday signed onto a $150 million funding package to fight the coronavirus pandemic while vetoing $167 million she said should be saved as Michigan confronts what are expected to be plummeting tax revenues amid the pandemic’s economic fallout.

Just weeks ago, the Democratic governor and Republican-led Legislature had agreed to additional mid-year spending to fund their priorities after a budget impasse last fall.

“The world has changed since those negotiations, and we must react and change along with it,” Whitmer told reporters while also announcing directives to restrict state departments’ discretionary spending and to suspend hiring.

She blocked $35 million for a new program she had touted that would have provided financial assistance for adults age 25 and older to attend community college. Also vetoed was $16 million to partially revive Pure Michigan, the state’s tourism campaign; $15 million to the Going Pro campaign, which helps businesses recruit students into the trades and other high-demand fields; and $37 million in earmarks, or “enhancement grants,” for projects in individual legislative districts.

“It’s too early to determine the exact impact on state revenues and knowing there is the potential for a significant loss in revenue, now is not the time to sign a bill for supplemental funding for anything other than dollars that can be utilized to help our COVID-19 response,” said Whitmer, who is expected to extend her stay-at-home order and other restrictions through April.

She and legislative leaders from both parties issued a joint statement saying that to date, the state had spent more than $130 million to secure medical supplies such as masks and ventilators.

Whitmer also OK’d $120 million in spending unrelated to the outbreak, including $31 million for legal settlements and $14 million to reimburse communities’ costs for the March 10 presidential primary.

There is an initial $25 million payment as part of the state’s $80 million settlement with male teens who said they were sexually harassed or assaulted in prison while housed with adults. Legislators also allocated $6 million to cover costs associated with a $12 million settlement with the family of a Detroit teenager who crashed an all-terrain vehicle and died after he was shot with a Taser by a state trooper.

Other funding blocked by Whitmer includes $8 million toward a barrier system at the Brandon Road Lock and Dam near Joliet, Illinois, to prevent Asian carp from reaching the Great Lakes; $11.3 million to replace a computer system whose poor performance has made it difficult to track progress in a yearslong effort to improve services to children in foster care; and $5 million to help municipalities to offset the cost of repair infrastructure damaged by high by erosion from high water levels in the Great Lakes.

House Appropriations Committee Chairman Shane Hernandez, a Port Huron Republican, said the money to combat COVID-19 will support health care workers with more testing equipment, protective gear and other resources. The vetoes, he said, show the “fundamental reality that state government must be focused on lessening the spread of COVID-19 while also preparing for budget pressures caused by a temporary economic slowdown.”