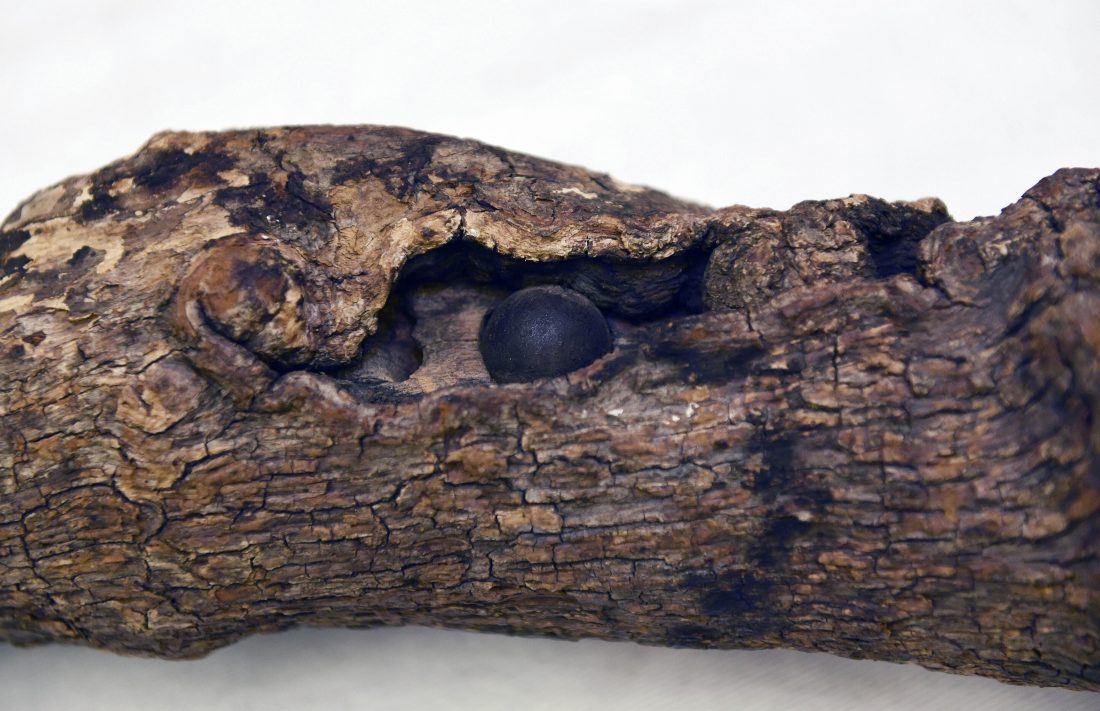 This Friday, Jan. 17, 2020 photo shows a tree branch with a bullet from the 3 days of the Battle of Gettysburg in 1863 stored in the warehouse in Detroit. The Detroit Historical Society is providing The Detroit News access to its 300,000-plus piece collection of Detroit artifacts, kept at historic Fort Wayne. Elana Rugh, president and CEO of the historical society, said only about 5% of the collection is on display at a time.(Clarence Tabb, Jr./Detroit News via AP)

DETROIT — The Historic Fort Wayne property has languished for decades, but the city is finally taking steps to redevelop the iconic fort.

Detroit officials this month will seek out concepts for the city-owned 78-acre riverfront park as they finalize a lengthy process to lift multiple deed restrictions that have limited the city’s ability to find new uses for the fort’s buildings that have endured decades of neglect.

The property in the city’s Delray community is adjacent to the future entrance of the $4.4 billion Gordie Howe International Bridge, broadening exposure for the site.

“The fact that the bridge is happening is a big moment for Fort Wayne, because it has previously been so isolated,” Meagan Elliott, the city’s chief parks planner, told The Detroit News.

The city is seeking public or private partners, including nonprofit, for-profit, governmental or quasi-governmental agencies and educational institutions with a vision for buildings on the sprawling campus, according to a draft of Detroit’s request for information being released Feb. 10.

“We just want to put this out there and see what we get back,” Elliott said.

The former military facility on West Jefferson contains an 1842 star fort, a fortress built to shoot cannons, prehistoric Native American burial mound and vacant buildings that, over time, have been used for residential, office and storage space.

The city is asking for concepts that could target individual buildings, a group or the entire site along the Detroit River, the request being distributed by the city’s General Services Department says.

Responses, the draft notes, will be used to inform Detroit’s efforts “to facilitate new partnerships, recreational and historical programming, and adaptive uses” at Fort Wayne, and might lead to the selection of one or more partners.

Elliott said the city might opt to negotiate long-term leases for some of the buildings and bring on a third party to oversee operations. Developers selected for future projects will be responsible for infrastructure costs.

The National Park Foundation and Kresge Foundation are funding the city’s planning process. Kresge in 2016 announced the partnership and a $265,000 grant to support the effort.

“Kresge saw an opportunity for a comprehensive planning and engagement process that could lead to a valuable, underutilized historical and cultural asset becoming major benefits to Detroit, in particular, to the residents of southwest Detroit and local indigenous communities who have a connection to the site,” said Wendy Lewis Jackson, managing director of the Kresge Detroit Program, in a statement.

“With its rich history, its period architecture and its riverfront location, Fort Wayne is a jewel in the rough that can be much more for all Detroiters.”

The city acquired Historic Fort Wayne in three phases in 1949, 1971 and 1976. Each came with unique land restrictions that range from a ban on picnic tables to sporting activities on certain portions of the grounds, Elliott said.

The city’s General Services Department is working to remove the deed restrictions within the year, opening up potential opportunities.

As part of an advisory group for Fort Wayne, southwest Detroit resident Simone Sagovac wants to secure the fort’s long-term historic preservation and economic investment to keep it maintained.

She’s open to improvements but wants to ensure they are inclusive of the community, rather than high-end developments that would primarily cater to an exclusive clientele.

“I have personal concerns about how that process could potentially open up to uses that maybe would not be in line with what community residents would want to see there,” said Sagovac, a member of the Southwest Detroit Community Benefits Coalition. “I want to make sure that there’s always going to be community voices in this process.”

The bridge project is elevating Fort Wayne to serve as a gateway to Detroit and the region. To account for that, the city is working on plans to increase public access by the end of the year.

The site, which houses the Tuskegee Airmen National Historical Museum, is open to the public on weekends from May to October. But it has primarily been limited to tours, organized sports, weddings and other permitted uses.

Mark Butler, a spokesman for the Windsor Detroit Bridge Authority, said Gordie Howe project officials have used facilities at Fort Wayne for public information sessions and will continue to over the term of construction for the bridge, which is slated to open in 2024.

Other than renting space at Fort Wayne to conduct meetings, bridge project officials “do not anticipate requiring any space outside of the port of entry.”

As part of studies undertaken by the state Department of Transportation for the bridge project, there will be initiatives facilitated by the bridge project to benefit Fort Wayne, including signage, landscaping and fencing and lighting improvements, he added.

Scott Bentley, superintendent of the River Raisin National Battlefield Park in Monroe, said Detroit’s effort is the most engagement for Fort Wayne’s future that he’s seen in at least a decade.

“It has had a complex and troubled past, and I’m really excited that the city is focused on a positive future for the site and strategy for how to do it,” said Bentley, who has represented the National Park Service in talks with the city. “It’s arguably one of the most historic sites in the state of Michigan.”

Construction of Fort Wayne began in 1842 in anticipation of an invasion from British-controlled Upper Canada.

It was named after Brig. Gen. “Mad” Anthony Wayne, who served in the U.S. Army during the Revolutionary War and the Northwest Indian War, according to a 2016 city report for the proposed historic district.