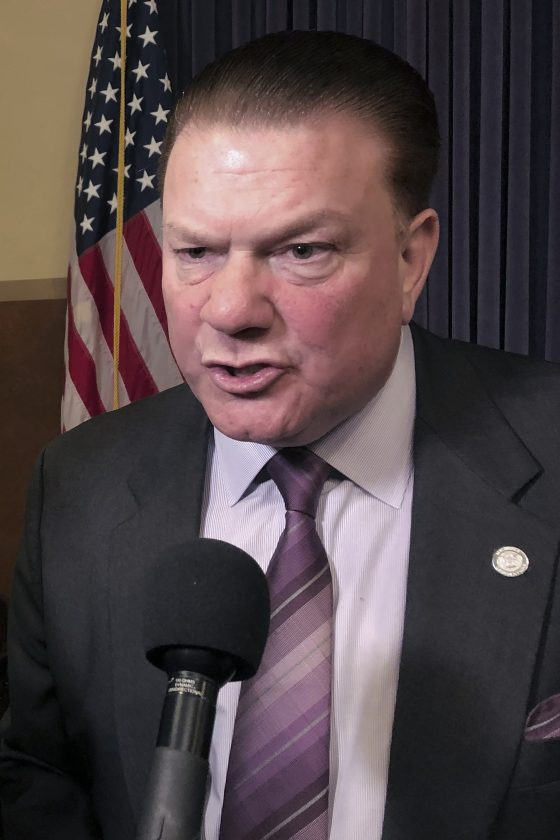 FILE - In this Feb. 20, 2019, file photo, State Sen. Peter Lucido, R-Shelby Township, speaks after a news conference at the Capitol in Lansing, Mich. State lawmakers across the U.S. have reached a troubling milestone for allegations of sexual misconduct. New complaints filed against Lucido have brought the total number of state legislators accused of sexual misconduct during the past three years to more than 100. (AP Photo/David Eggert, File)

LANSING (AP) — A third woman in two weeks has publicly come forward with sexual harassment allegations against a Michigan state legislator, according to a published report Sunday.

Melissa Osborn, who works as a regulatory affairs specialist for a trade group, told Crain’s Detroit Business that Republican state Sen. Peter Lucido commented on her appearance and clothes while visually scanning her body and touching the region she described as “my lower back/upper butt.” Osborn, 40, said it happened at the Michigan Credit Union League’s annual government affairs conference in May.

“He was looking at me up and down,” she said. “And he stayed there for several minutes, making these comments about my appearance and my look and what he liked about it.”

A messages left by The Associated Press on Sunday for a Lucido spokesman was not immediately returned.

Another state lawmaker, Democratic Sen. Mallory McMorrow of Royal Oak, filed a complaint on Jan. 21 against Lucido. McMorrow, 33, said it happened as she introduced herself to him at a training session two days after she defeated an incumbent in the November 2018 election. She alleged that he put his hand on her lower back region and made comments about her appearance, insinuating that she won because of her looks.

The Senate Business Office opened an investigation into Lucido earlier this month after a 22-year-old female journalist reported that he told her that students from an all-boys Catholic school visiting the Capitol could “have a lot of fun” with her.

Lucido issued a brief apology for what he called a “misunderstanding” with Michigan Advance’s Allison Donahue but later said he was misquoted.

The AP has tallied about 100 state lawmakers across the country who have been publicly accused of sexual misconduct or harassment since January 2017.