Budget impasse remains due to dispute over shifting funds 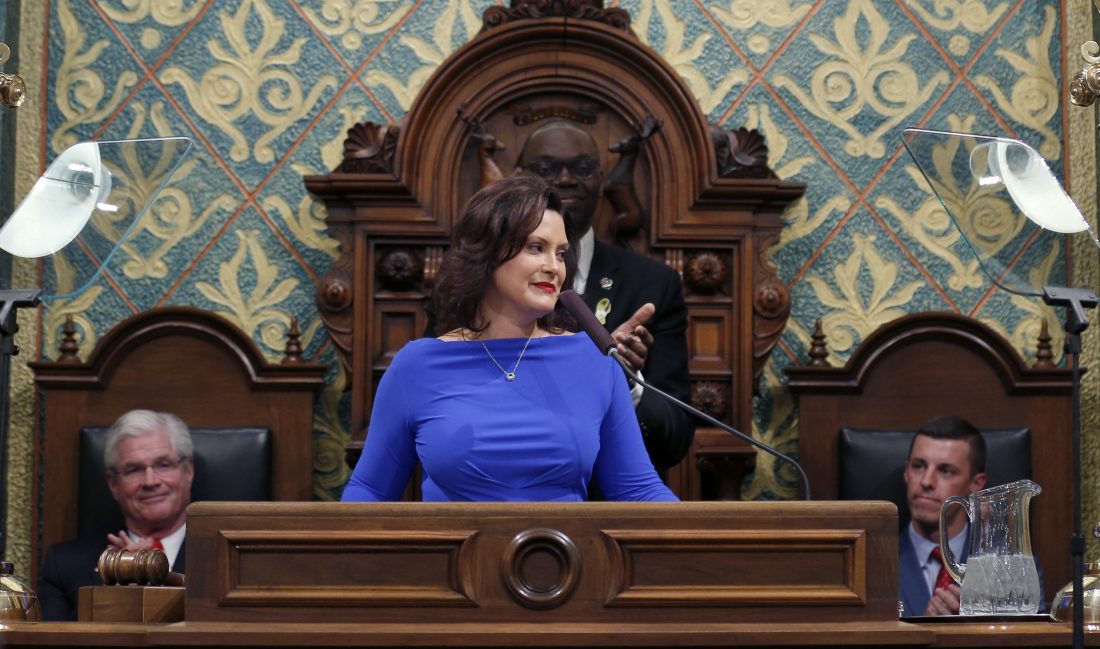 FILE - In this Feb. 12, 2019 file photo, Michigan Gov. Gretchen Whitmer delivers her State of the State address to a joint session of the House and Senate as Senate Majority Leader Mike Shirkey, House Speaker Lee Chatfield, right, and Lt. Gov. Garlin Gilchrist, rear, react, at the state Capitol in Lansing, Mich. Whitmer and Republican lawmakers said Thursday, Nov. 7, 2019 that they were very close to agreeing to restore some funding she vetoed during a budget impasse, but a deal remained elusive due to their clash over limiting the governor's power to shift funds within individual departments. (AP Photo/Al Goldis)

LANSING — Gov. Gretchen Whitmer and Republican lawmakers said Thursday that they were very close to agreeing to restore some funding she vetoed during a budget impasse, but a deal remained elusive due to their clash over limiting the governor’s power to shift funds within individual departments.

Hopes of ending the more than five-week-long stalemate had grown following the posting of potential votes on two supplemental spending bills in the GOP-led House. The Republican-controlled Senate, however, adjourned until next week. The House had planned to start a three-week hunting and Thanksgiving break but will return next Wednesday in case an agreement is reached.

Amber McCann, a spokeswoman for Senate Majority Leader Mike Shirkey, said Whitmer must agree to sign a separate bill that would give legislators the authority to stop a governor from unilaterally moving money they allocate. While the State Administrative Board power is rarely used, Whitmer employed it to transfer $625 million on Oct. 1 — a day after she signed a “mess” of a budget and vetoed an unprecedented $947 million in proposed spending on roads, charter schools, sheriff’s deputies, college scholarships and other programs.

“Unless it has the weight of law, unfortunately the governor has proven herself to be untrustworthy,” McCann said.

Whitmer opposes such legislation. She again committed to not using the board to shift money passed by lawmakers as part of a negotiated budget — which never occurred this year — including publicly demonstrating her pledge by adding language to spending bills and issuing signing messages.

“We have really made great ground on the supplemental and if the Legislature wants to get that done and to my desk, it can just be a matter of hours at this point in time,” she said earlier Thursday. “One question I think is are there going to be political games still being played? I hope not.”

Both Whitmer and GOP legislators have proposed undoing some of the line-item vetoes she issued, which will affect more and more services the longer the impasse lasts.

Whitmer, like the GOP, hopes to provide a Medicaid reimbursement rate increase for rural hospitals and funding for an autism nonprofit, county-based veteran services and road patrols done by sheriff’s deputies. She also wants to provide additional funding to three departments — Corrections; Technology, Management and Budget; and Health and Human Services — that she says are at risk of not being able to protect public health and safety due to cuts that were in the budget.

“I believe that we found some common ground on what could be a comprehensive supplemental that will address a lot of the things that people care about,” Whitmer said. “Anyone who is lobbying on behalf of the Autism Alliance or charter school increase or any of the other pieces that didn’t survive the initial round, they should be lobbying the Legislature to pass a supplemental and not play games — just get it to my desk and we can get it done.”

Asked if Shirkey was sympathetic to groups that face cuts, McCann said “absolutely. The Senate and Legislature funded all of those groups. The only person who chose to take away their money was Gov. Whitmer.” The conservative group Michigan Rising Action also criticized Whitmer, saying she cut items she had publicly supported, such as funding for autism services and the response to the opioid epidemic.

Tiffany Brown, a spokeswoman for Whitmer, said the governor and Republican House Speaker Lee Chatfield worked to negotiate a deal on additional spending and transfer powers.

She accused Senate Republicans of being unwilling to compromise to fix “fundamental problems” in the budget.

In a written statement, Chatfield characterized the recent talks as “good” and “productive” but said all three sides had some concerns.

“Everyone wants to see funding restored for these important programs, and we all want to see a permanent resolution to this issue that maintains a constitutional balance of powers and provides real assurances that this situation won’t come around again,” he said. “We will continue to work together until we reach that point.”