Despite labor costs, GM averts financial woes of its past 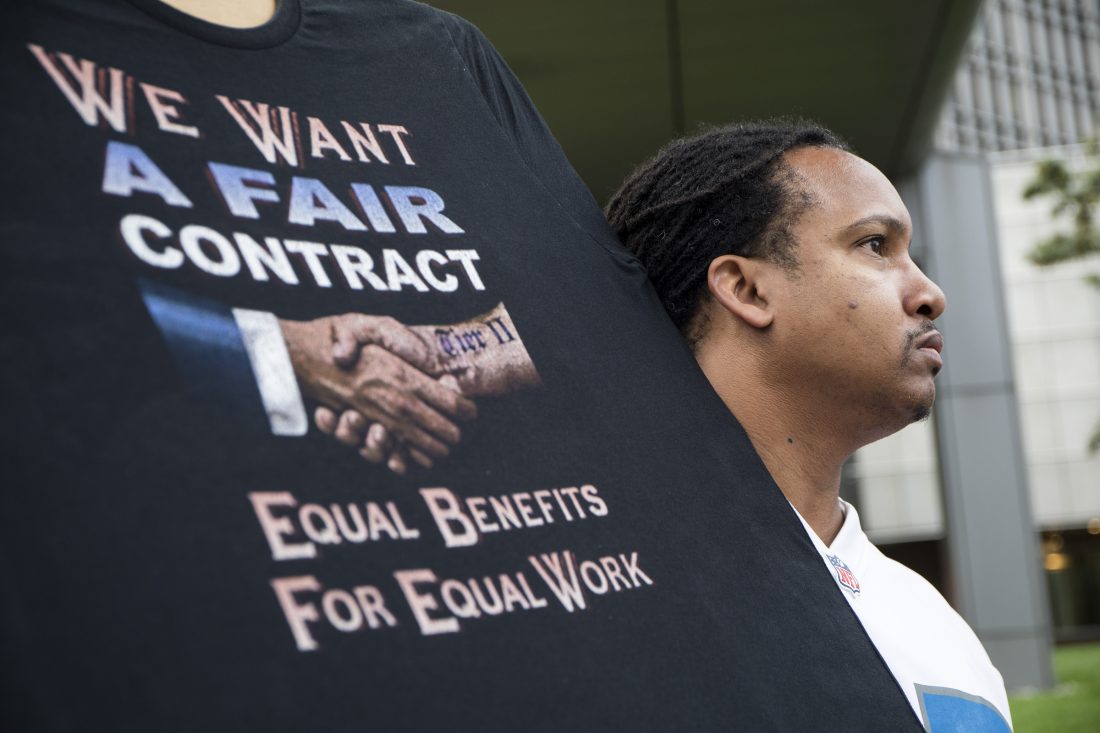 Sean Crawford, of United Auto Workers 598, rallies outside the Marriott Renaissance Hotel while the UAW GM Council holds a meeting inside the hotel in Detroit, Sunday Sept. 15, 2019. The new four-year deal between General Motors and 49,000 United Auto Workers will drive up the company’s expenses with pay raises, bonuses and other increases. But analysts say GM is far better able to handle the expenses now than it was a decade ago, when the high cost of labor helped send it into bankruptcy protection. (Kathleen Galligan/Detroit Free Press via AP, File)

DETROIT (AP) — A decade ago, high labor costs helped drag a bloated and debt-ridden General Motors into a government-funded bankruptcy.

Now, a contract deal reached this week with the United Auto Workers union will raise the company’s costs once again, at a time when the auto industry is facing the uncertainty of tariffs and trade wars, slowing global sales and rising capital expenses to develop autonomous and electric vehicles.

Analysts say the four-year deal, if approved next week by 49,000 striking workers, will hit GM’s bottom line, but not badly enough to send it back into financial trouble like 2009, when it ran out of cash and was cleansed of $54 billion in debt during a 40-day trip through bankruptcy protection.

“Across the board, it’s a company that is leaps-and-bounds healthier than it was during the Great Recession,” said Jeff Schuster, a senior vice president at the forecasting firm LMC Automotive.

Before contract talks opened with the union last summer, GM had hoped to cut labor costs to bring them closer to those at U.S. factories run by foreign automakers. That didn’t happen. Instead, the union went on strike, silencing GM’s U.S. factories and costing the company an estimated $2 billion due to lost vehicle production.

In a tentative deal reached between the two sides, GM agreed to provide longtime workers 3% pay raises in two of the years, with 4% lump sums in the other two. By itself, an $11,000 ratification bonus per worker will cost the company more than a half-billion dollars.

The deal did nothing to rein in the rising cost of health care; instead it will remain at a 3% premium cost per worker, or about 10% of what most workers in the nation pay. There also are annual profit-sharing checks, a faster path to full pay of more than $32 per hour for workers hired after 2007, and requirements that temporary workers get full-time jobs after three years.

But the GM of today that must shoulder these costs is in far better shape than the GM of 10 years ago, when the Great Recession caused the near-collapse of the U.S. auto industry. At that time, GM had about 235,000 employees worldwide, including 74,000 U.S. factory workers. Now it has 55,000 fewer employees across the globe, and 24,000 fewer people in U.S. factories.

A decade ago, the company was dealing with a worldwide financial meltdown that froze credit and auto sales. Gas prices also were high, chasing any remaining buyers away from GM’s main profit centers in the U.S., pickup trucks and SUVs. Fiat Chrysler also ended up getting bailed out by the government, and Ford survived only because its CEO borrowed billions.

Now, GM has about $17.5 billion in cash and liquid securities on its balance sheet, which exceeds debt by more than $2 billion. Although its sales fell slightly so far this year, it’s still making big money on pickup trucks and SUVs in an era of lower gas prices. Last year it announced a restructuring plan that will save that will save an estimated $6 billion per year by the end of 2020. That included closing five U.S. and Canadian factories and letting go of about 8,000 white-collar workers. It also has trimmed engineering and product development costs.

The company says it can now break even if U.S. sales fall to a range of 10 million to 11 million per year, a rate not seen since the Great Recession. Currently sales are running just under 17 million per year in GM’s most profitable market.

The new contract also delivered some wins for GM. Over the UAW’s objections, it will close three U.S. factories associated with slow-selling car production. The company had wanted to close a fourth, but kept an assembly plant in Detroit alive with a new electric truck.

The deal includes buyout and retirement incentives for older workers, and while that will be a big one-time cost, it will let the company replace them with lower-paid workers, trimming payroll for at least for a few years, said Kristin Dziczek, vice president of the Center for Automotive Research, an industry think tank.

Eventually, though, lower-paid workers and temporary hires will have to become full time, adding to costs, Dziczek said. And the company still is stuck with health care costs that are far higher than in other industries.

“Those will keep going up every year,” Morningstar analyst David Whiston said, adding that GM is close to paying $1 billion per year for employee health care. “It’s not sustainable how much they are paying for that.”

The UAW’s deal with GM is its first this year, and whatever costs GM winds up with likely will be passed on to Ford and Fiat Chrysler, which still have to go through bargaining.

And while GM and other automakers may be better position today than a decade ago, they still face significant headwinds. Global auto sales are slowing, including in the U.S., and some economists are predicting another recession as early as next year. President Donald Trump has imposed tariffs on imported steel and aluminum, and he’s threatened duties on other imported goods including auto parts, all of which will drive up GM’s costs.