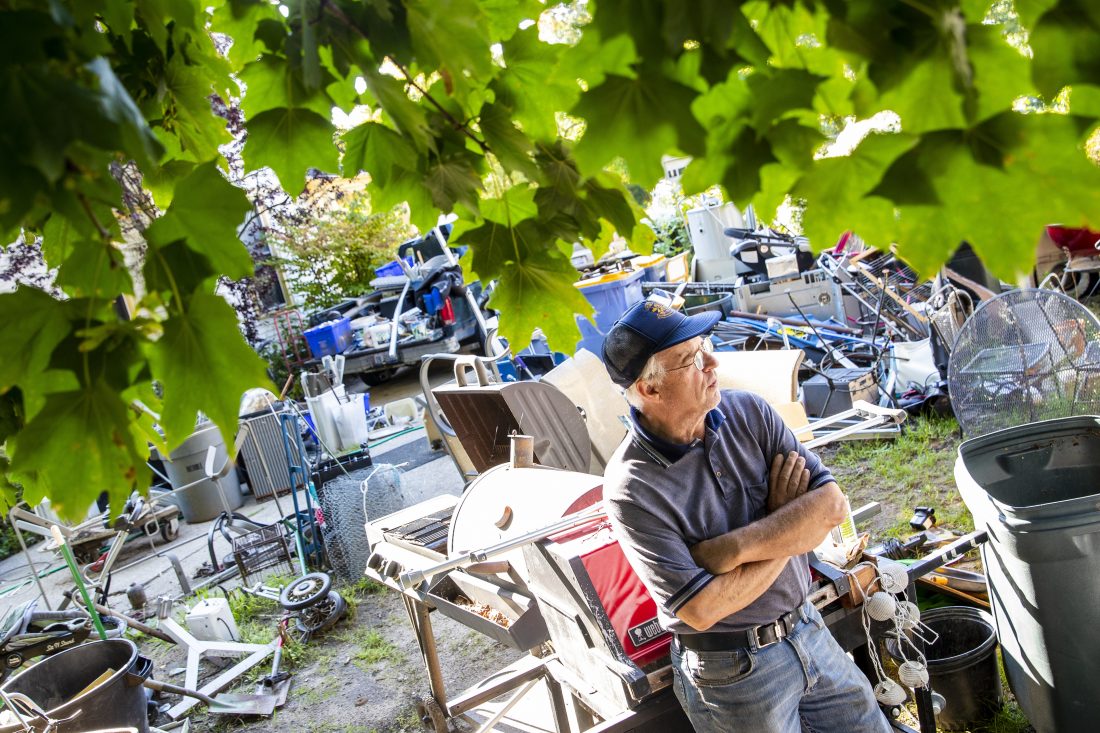 Bill Peterson, owner of Trailer Trash, talks at his trash hauling and recycling business he operates out of his Grand Rapids home on Wednesday, Sept. 18, 2019. Peterson, who says it's his calling in life to take care of trash, is fighting against the city for zoning violations. (Cory Morse/The Grand Rapids Press via AP)

GRAND RAPIDS, Mich. (AP) — A Michigan man has been sued, fined and jailed for violating city rules with his passion for collecting trash and sorting it for recycling in his backyard.

But Bill Peterson is relentless and continues to gather garbage at his Grand Rapids home, despite the trouble he stirs.

“I can’t in good conscious not do this,” Peterson told the Grand Rapids Press. “If I don’t do it, I don’t know who else will.”

Peterson’s saga with the city has been unfolding for more than 16 years. The city wants him to clean up his backyard and says Peterson is violating city rules by operating a trash sorting and recycling business in a residential neighborhood.

“The city of Grand Rapids should be in favor of all of us recycling,” said Peterson, 68, who has hauled trash in the city for decades. “Telling me to do it someplace else would be like telling a homeless person there’s plenty of space in the penthouse in the Grand Plaza.”

The city in May issued Peterson a zoning violation and set an Aug. 27 deadline for him to cease business operations and clean up his property.

“We have been listening to all opinions and concerns regarding this case and are looking at all options before moving forward,” city spokeswoman Amy Snow-Buckner said in a statement. She declined to discuss Peterson’s case. Meanwhile, Peterson said the practice, which he calls Trailer Trash, is a hobby and doesn’t offer him a profit.

“My grandfather taught me that you don’t throw away something that you might use someday,” Peterson said.

“My wife is literally a child of the Depression. She doesn’t throw things away. Her mother didn’t either. The waste I see tears me up.”

In January 2016, the city sued Peterson in 61st District Court for operating his trash hauling business on a residential property and storing items supporting his business outdoors, court records show. Peterson pleaded no contest and was assessed a $975 fine and placed on probation, according to court documents.