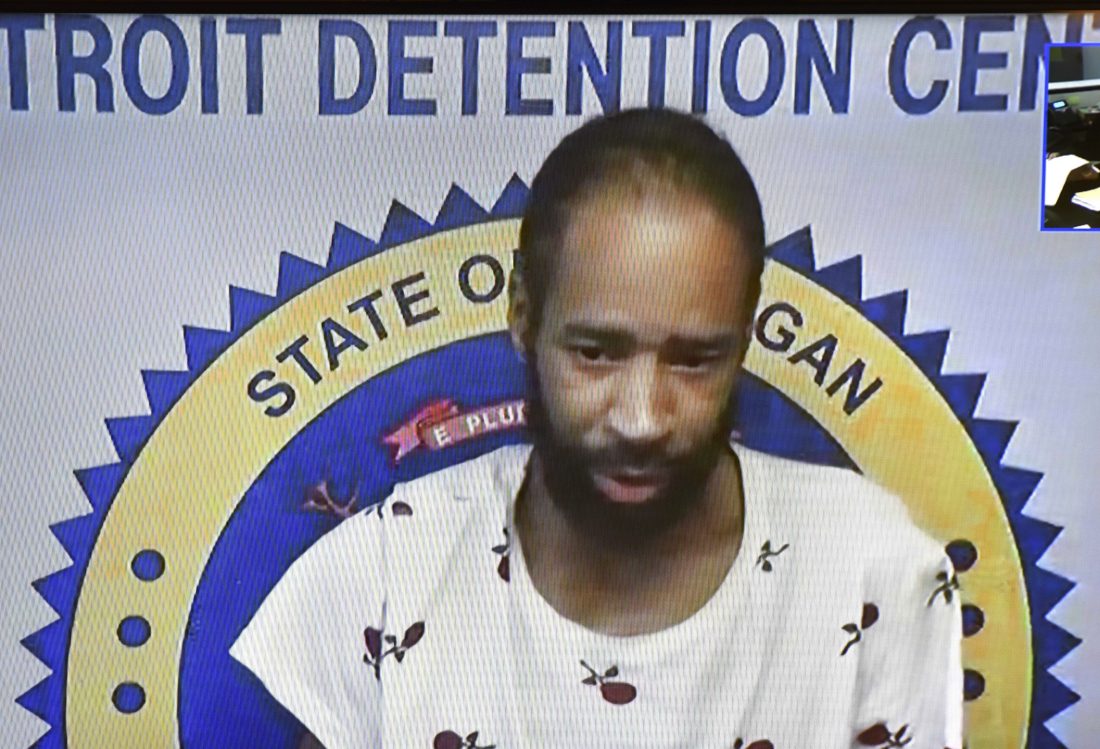 In this Thursday, Aug. 22, 2019 photo taken from a video monitor, Pierre Cleveland, 33, is arraigned in 36th District Court in Detroit. Cleveland was charged Thursday in connection with the death of a 9-year-old Detroit girl, who was mauled by three dogs despite rescue efforts by neighbors, her father and emergency workers. (Todd McInturf/Detroit News via AP)

DETROIT (AP)– A man was charged Thursday in the death of a 9-year-old Detroit girl, who was mauled by three dogs despite rescue efforts by neighbors, her father and emergency workers.

Pierre Cleveland, 33, was charged with second-degree murder, involuntary manslaughter and having a dangerous animal causing death, Wayne County prosecutors said. Cleveland owned the pit bulls or pit bull mixes that got free from his yard and attacked Emma Hernandez as she rode a bike Monday in her neighborhood on the city’s southwest side.

A judge entered a not-guilty plea on Cleveland’s behalf and set bond at $2 million. The judge also set a probable cause hearing for Aug. 30 and a preliminary exam on Sept. 6.

Defense attorney Emmett Greenwood said Cleveland tried to get the dogs off Emma, and that he has no criminal history. Cleveland is a machinist who lost three fingers in a recent workplace accident, Greenwood said.

“My client and (his) family wanted to convey they are praying for the precious child,” Greenwood told The Associated Press after the hearing. One of the dogs was shot by a bystander while a medical crew tried to save the girl in an alley. The other dogs were captured. Neighbors threw bricks at the dogs to try to stop the attack, police said.

Emma died at a hospital.

Her father, Armando Hernandez, said this week that the dogs lived at a house behind his, and that he and the owner had argued recently about them. The dogs weren’t properly restrained and the fence was too flimsy, Hernandez said.

Prosecutors allege Cleveland left the dogs loose and went to a nearby store. Investigators say the fence was damaged and unsecured, and a side door on a garage was open, leading to the alley.

Cleveland knew the dogs were aggressive. One of the dogs involved in the attack recently killed puppies in Cleveland’s home, a prosecutor said.

“It is high time that the city of Detroit shines a light on the owners of these dangerous animals that sometimes roam and wreak serious havoc — none worse than what happened here,” Prosecutor Kym Worthy said in a statement.

Animal control officers received a complaint in March 2018 about two of the dogs involved in Monday’s attack, according to several media reports. Officers responded to a call about the dogs not being behind the fence but nobody answered the door.

The dogs are expected to be euthanized, though it’s unclear when. The Associated Press left a message with Detroit Animal Care & Control.

The death follows the December 2015 fatal mauling by four pit bulls of Xavier Strickland, a 4-year-old Detroit boy who was attacked with his mother. Police had to shoot them to free the boy’s body.

The dogs’ owner, Geneke Lyons , was convicted several months later of involuntary manslaughter. Lyons wasn’t home at the time of the attack, but prosecutors said he should be held responsible because the dogs weren’t under control. A judge earlier dismissed a second-degree murder charge. Numerous pit bull attacks have made headlines in Michigan and elsewhere. A 2014 American Veterinary Medical Association report says pit bulls are not disproportionately dangerous in comparison to other breeds, and that the owner’s behavior should be taken into account.