After Amash dumped Trump, his district may do same to him 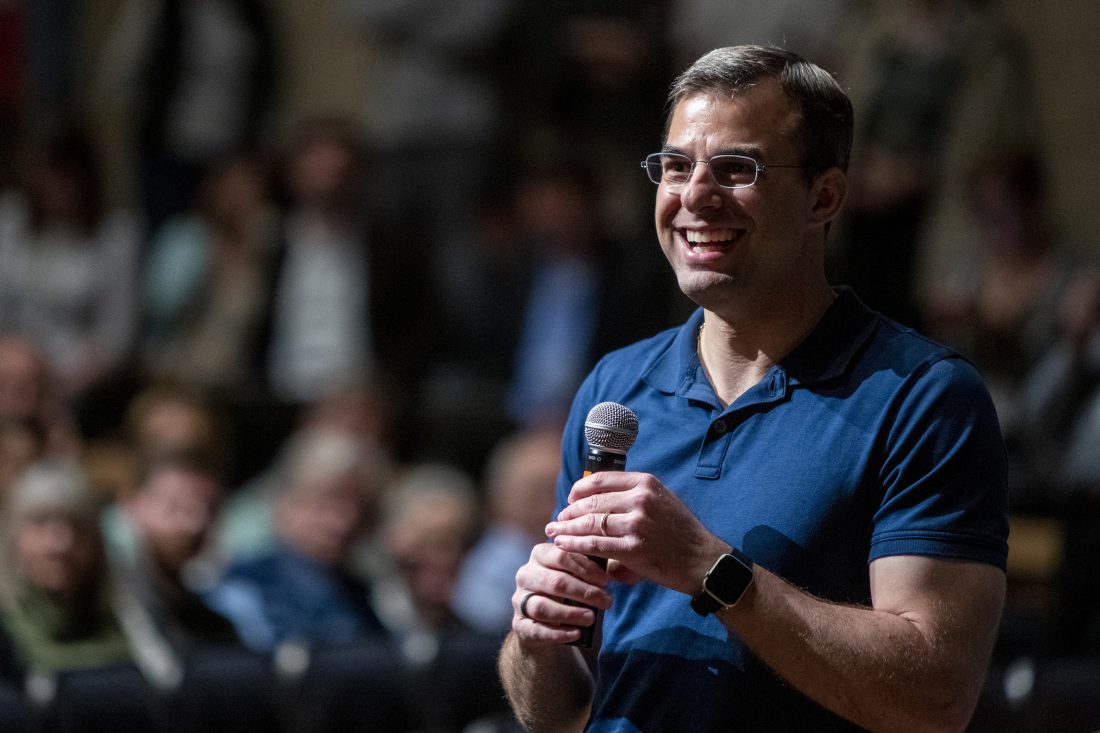 FILE - IN this May 28, 2019, file photo Rep. Justin Amash, D-Mich., holds a town hall meeting at Grand Rapids Christian High School's DeVos Center for Arts and Worship. Democrats may be the biggest winners from Amash’s impeachment stand against President Donald Trump. Amash has left the Republican Party, is running for re-election as an independent and is flirting with a White House bid as a libertarian _ a threat that could wound Trump one more time. (Cory Morse/The Grand Rapids Press via AP)

GRAND RAPIDS, Mich. (AP) — Eirran Betka-Pope was on her lunch break when she spotted hundreds of Donald Trump supporters protesting outside the office of Rep. Justin Amash, the first Republican on Capitol Hill to say Congress should begin impeachment proceedings against the president.

The protesters, who stood on the sidewalk with “Squash Amash” signs, saw his comments as the ultimate betrayal of a president they adore. But for Betka-Pope, a Trump critic, Amash’s actions were commendable — and worthy of a counterprotest. The 32-year-old from Grand Rapids, who works in theater and sketch comedy, put on a Trump mask she happened to have in her car and joined the crowd on the sidewalk. She held up a piece of paper that read “I suck.”

For the next half hour, Betka-Pope stood silently as some people insulted her. A few passing drivers honked in support. More than one person flashed a middle finger.

Betka-Pope happily took the abuse for the congressman. But the one thing the Democrat says she won’t do to show her appreciation for Amash is vote for him.

“There are other candidates more aligned with my values,” she said.

Amash’s is another cautionary tale for GOP lawmakers who consider opposing Trump, whose job approval rating among Republicans has hovered around 90% for the past year, according to Gallup.

Those who stand against him quickly find it’s a lonely place to be — and may spell the end of their political career.

In the era of tribal politics, the worst thing to be may be a politician without a tribe.

The biggest winners to come out of Amash’s big stand may be Democrats. Amash ultimately left the GOP , is running for his seat as an independent and is flirting with running for president as a Libertarian — a threat that could wound Trump one more time. More than 200,000 Michigan voters supported a third-party candidate in 2016, when Trump won the state by just over 10,000 votes.

If Amash goes that route, he could help a Democrat win — just as he could if he stays in the race for the Grand Rapids-area House race. His exodus from the GOP has set up a three-way race that could divide right-leaning voters and help the Democratic nominee win what was once a GOP stronghold. Democrats now see it as one of their best chances to pick up a House seat next year.

“I think this was a district everybody was eyeing when we thought we’d be running against one Republican,” said Brian Stryker, a Democratic pollster who’s working for Hillary Scholten, a Democrat seeking the nomination. “It’s better to have two Republicans on the ballot.”

Once a bedrock of Republicanism in the state, Kent County has become more Democratic as Grand Rapids and its suburbs have grown diverse and better educated in recent years, thanks to growth in several universities and the medical sector. The birthplace of Gerald Ford and hometown of Education Secretary Betsy DeVos now looks a lot like the politically divided suburban districts Democrats flipped in 2018 to win control of the House.

Democrats and Republicans vying for the seat are both raising money easily, with two Democrats on pace to surpass Amash and one Republican already doing so. In a cruel twist for the congressman, Democrats say they’re poised to hammer Amash for the times he voted with his former party, such as his support for a House bill to dismantle the Affordable Care Act, President Barack Obama’s health care overhaul.

Amash, the son of Arab Christian immigrants from Palestine and Syria, has always charted his own path. As a young state lawmaker he earned the nickname “Mr. No,” holding a hard line against government spending and what he viewed as overreach. He came to Congress in 2010 with the class of small government, tea party Republicans. He quickly stood out as an ideological purist, even in a class of professed purists.

His willingness to buck GOP leaders earned him his first primary challenge in 2014 from a Republican businessman with establishment backing angry that Amash voted against a GOP budget that included a business tax cut.

But Amash survived by digging in, holding regular town halls and explaining every vote he took on his Facebook page.

He went on to win the general election by 20 percentage points. Amash won easily again in 2016, even as he criticized Trump for caring more about accumulating power than following the constitution.

Since then Trump appears to have only firmed up support with Republican voters, while more Democrats moved in. Amash’s independence looked more like a liability than an asset.

Anna Timmer, a former Amash supporter who volunteered for his first congressional campaign in 2010, said voters like herself were willing to overlook his opposition to Trump then because many Republicans were unsure about him as well.

“People didn’t know what they were going to get with Trump,” Timmer said. But by 2018 they knew what they were getting — and they liked it, she said. On Amash, she said: “I think he saw the writing on the wall.”

Amash won re-election last year by 11 percentage points — half the margin he had two years earlier and one of his closest races since taking office.

Before the year ended, several conservatives and Trump loyalists started talking about mounting primary challenge in 2020.