Trump touts economy, but not everyone in Michigan feeling it 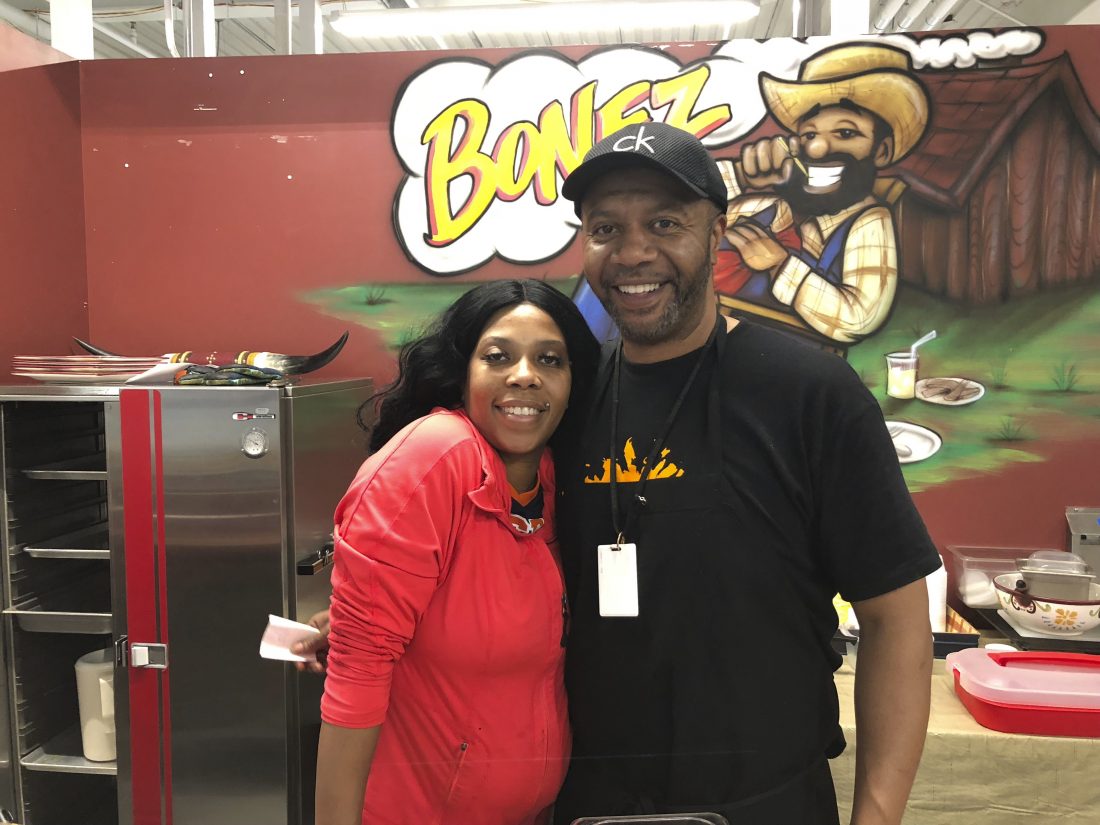 In this July 17, 2019 photo, Denise Anderson and her brother Mike Ford are seen in the a soul food booth they run at the SVRC Marketplace in Saginaw Michigan. Anderson says she hasn't personally seen benefits from the improved economy and she opposes President Donald Trump. Economic conditions in Michigan could be crucial in determining whether Democrats retake a state they once held for decades (AP Photo/Sara Burnett)

SAGINAW (AP) — A bright mural welcomes people to downtown Saginaw, where a new indoor market opened along the riverfront last year — part of the city’s decades-long effort to reinvent itself after the auto industry started leaving. Inside the market, vendors sell falafel, fresh-baked pies and T-shirts.

For Mike Wilson, who sells sports cards and collectibles, it’s a sign that mid-Michigan has adapted since the days when his father and all four of his grandparents worked for General Motors. He says President Donald Trump — whom he supports “100%” — deserves credit.

“When people can spend what they’re spending with us you know it’s going well, because what we sell isn’t cheap,” says Wilson, 46.

But at the soul food booth just around the corner, Denise Anderson is still searching for the life Trump promised.

“I haven’t seen it,” Anderson said as she served up fried catfish. Things “felt better” when Barack Obama was president and her brother could get health care, she says.

The contrasting views are at the heart of the battle for Michigan, a state that helped Trump win the White House in 2016 and that both the president and Democrats agree he must hold to win a second term.

It’s among Democrats’ top 2020 targets, along with Wisconsin and Pennsylvania, and its 16 electoral votes and diverse electorate are a reason Democrats will hold one of their presidential primary debates in Detroit on Tuesday and Wednesday.

Whether Trump can win again may hinge on a list of unknowns, including turnout on Election Day and which Democrat emerges from a crowded field of candidates. It also rests on how voters see the economic health of a state cautiously eyeing a slowdown in the auto industry, which cuts to the core of Trump’s promise to Michigan four years ago.

The president came to Saginaw County and vowed to revive manufacturing here, part of his vision of returning America to an earlier moment of greatness. In Michigan, a state trying to regain the roughly 1 million jobs lost from its peak in 2000, the message resonated. But there was never a plan behind Trump’s promise.

His economic policies have brought only slight manufacturing growth and his trade policies may actually have harmed it. Still, Trump is presiding over a stretch of larger growth in other sectors. The overall impact is an uneven economy and a clash over whether Trump should be getting credit or blame.

Trump’s path to a second victory in Michigan runs through working-class places like Saginaw County, about 100 miles northwest of Detroit. In 2016 Trump became the first GOP presidential nominee to carry it since Ronald Reagan’s 1984 landslide.

His success here — and in the 11 other Michigan counties that supported Obama and then Trump — was significant. Democrat Hillary Clinton received about 10,000 fewer votes in Saginaw County than Obama did in his 2012 win. Trump won Michigan by just over 10,700 votes.

For much of the 20th century, Michigan was relatively prosperous thanks to a strong manufacturing sector, and the state largely supported Republicans for president. Then, boosted by a strong labor influence, the state in the early 1990s became part of the Democratic “blue wall” that supported Democrats for president, even as the GOP dominated state races.

The state swung again after Trump’s win in 2016, giving Democrats every statewide office on the midterm ballot along with two more congressional seats. The electorate’s mood next year is the subject of intense speculation.

Michigan is again seeing hiring gains and benefiting from the strong stock market. Detroit is growing again after leaving bankruptcy.