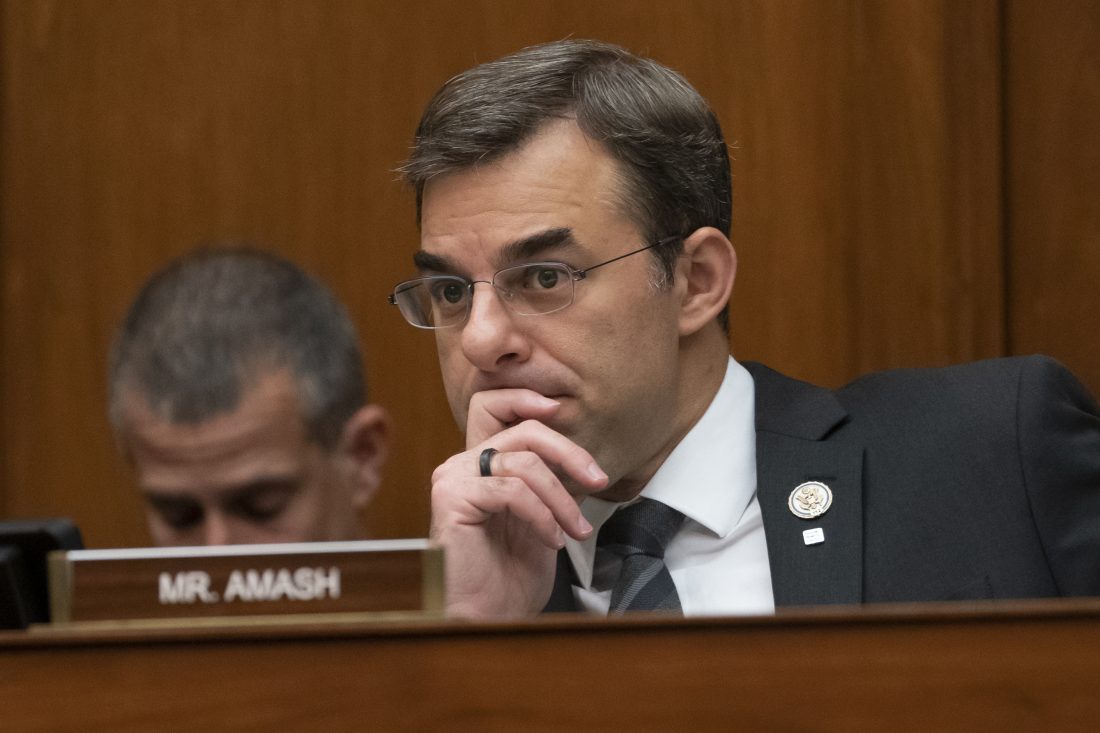 FILE - In this June 12, 2019 file photo, Rep. Justin Amash, R-Mich., listens to debate as the House Oversight and Reform Committee considers whether to hold Attorney General William Barr and Commerce Secretary Wilbur Ross in contempt for failing to turn over subpoenaed documents related to the Trump administration's decision to add a citizenship question to the 2020 census, on Capitol Hill in Washington. Amash, the only Republican in Congress to support the impeachment of President Donald Trump, said Thursday, July 3 he is leaving the GOP because he has become disenchanted with partisan politics and "frightened by what I see from it." (AP Photo/J. Scott Applewhite, File )

WASHINGTON — Rep. Justin Amash of Michigan formally withdrew from the House Republican conference Monday, days after announcing he is leaving the GOP because he has become disenchanted with partisan politics and “frightened by what I see from it.”

Amash, who had been the only Republican in Congress to call for impeachment proceedings against President Donald Trump, told GOP leaders he is withdrawing from the House GOP conference and resigning from the House Oversight and Reform Committee. Both decisions are effective immediately.

Amash told CNN Sunday he plans to run for his House seat as an independent, but declined to rule out a 2020 presidential bid against Trump.

Amash, 39, is in his fifth term representing the Grand Rapids area and was a founding member of the conservative Freedom Caucus. He told CNN’s “State of the Union” that he tried to work with Republicans to make changes from within, but “it hasn’t worked. It’s not working for anyone.”

Asked about Trump’s response on Twitter, in which the president called him disloyal and a “total loser,” Amash said Trump reinforced an idea from his op-ed, “which is he thinks that people owe loyalty to him.”

Members of Congress take an oath to support and defend the Constitution, not the president, Amash said.

A key goal of the Freedom Caucus is to make government more open and accountable, Amash said, but “over the years, I have seen that people are just falling in line behind the leaders, including people in my own caucus, you know, which I left. So it’s gotten worse and worse.”

Amash had been the only Republican in Congress to say Trump engaged in impeachable conduct, drawing the ire of many fellow Republicans and Trump. In a series of tweets in mid-May , Amash said a report by special counsel Robert Mueller “reveals that President Trump engaged in specific actions and a pattern of behavior that meet the threshold for impeachment.”

He was roundly criticized by fellow Republicans and withdrew from the Freedom Caucus after the group disavowed his views.

Amash had filed for reelection as a Republican in a race that has drawn three primary challengers, his first intra-party challenge since 2014.