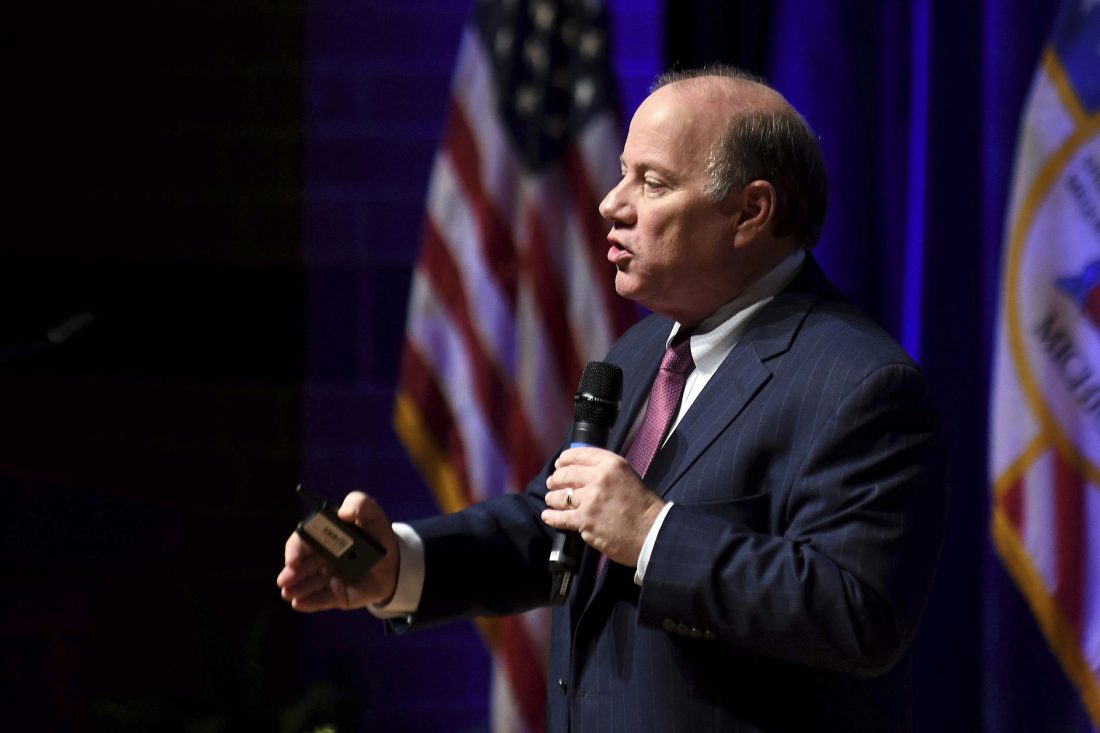 FILE - In this March 5, 2019, file photo, Detroit Mayor Mike Duggan delivers the State of the City at East English Village Preparatory Academy in Detroit, March. 5, 2019. Duggan is endorsing former Vice President Joe Biden in the race to challenge Donald Trump in the 2020 race for the White House. Duggan tells The Associated Press on Monday, July 22 that Biden “cares about the city and the auto industry and auto workers.” (Robin Buckson/Detroit News via AP)

As vice president under Barack Obama, Biden “was just a great friend of Detroit,” Duggan told The Associated Press on Monday.

“He visited multiple times,” Duggan said of Biden. “He cares deeply about the city and auto industry and auto workers. Joe Biden has a whole career of watching out for the working class in this country.”

Biden welcomed the endorsement, saying he was “incredibly honored” to have Duggan’s backing.

“Michigan, and Detroit in particular, will be crucial to defeating Donald Trump and restoring the soul of our nation, and I look forward to meeting firsthand with voters over the coming months to make the case,” Biden said in a statement.

Duggan endorsed and campaigned for Democrat Hillary Clinton in the 2016 presidential election. He also plans to campaign for Biden.

“I’m going to do whatever he asks me to do,” said Duggan, who is in his second term and Detroit’s first white mayor since the 1970s.

Detroit is about 80% African American. Michigan gave Trump his closest winning margin of any state, with the Republican finishing 10,704 votes ahead of Clinton.

Biden and a number of Democratic candidates are expected to address the NAACP national convention in Detroit this week. He also is among 20 candidates taking part in the party’s second set of presidential debates next week in Detroit.

Duggan said he has been in contact with Biden’s staff and will spend Wednesday with him in Detroit.

“We have a lot of talent in the Democratic Party and I know it’s going to be a vigorous nomination process,” Duggan said.