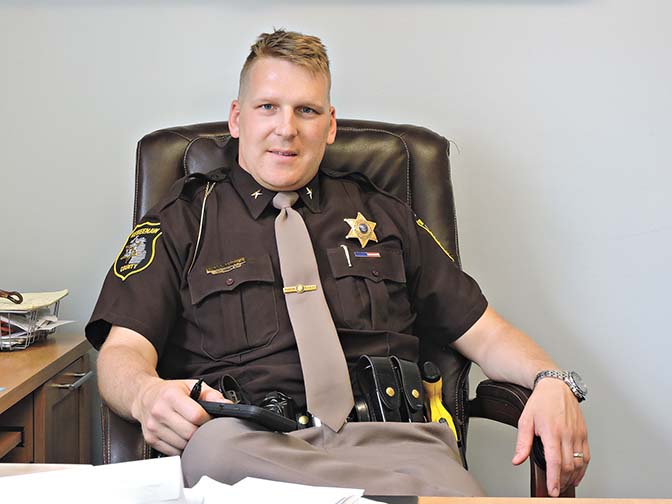 Graham Jaehnig/Daily Mining Gazette Keweenaw County’s new sheriff, Curt Pennala, works at the desk in his new office, which used to be a conference and training room. The conference room is now in the old sheriff’s office located in the rear of the building.

Although Pennala has only been in the position for just over two weeks, he said his transition has been smooth.

“It’s similar to the job I’d been doing for the last three years,” he said. “There have been some changes, but for the most part things are the same.”

Having seen other offices, Pennala said, he noticed that most sheriffs have their office just off from the front desk, so that the sheriff is readily accessible to the public, or those wanting to see the sheriff specifically.

“It’s a little different,” said Pennala. “I mean, he was around here forever. It’s like a death, almost, because you know eventually that day is coming, and then it’s like: ‘Boom. It’s done and here we are.’ It’s like a new operation.”

The changes overall have been, and will be small, Pennala said. Each sheriff brings his own style to the job, whether good, bad or indifferent, he explained. But with Pennala as sheriff now, the department also has a new undersheriff, Tonya Stefonich, who is a 15-year veteran of law enforcement, so the changes are compounded.

“I mean, with Tonya and I, our style of doing things is going to be different from the past administrations,” Pennala pointed out. “We’re doing what we think is right and what we want we want to see from the deputies.”

Externally, Pennala said the way Keweenaw County has always operated is not going to change — unless “you get some (one) from Florida or someplace who runs for sheriff.”

NEGAUNEE — The Negaunee Public Library will be offering a summer reading program for all ages from today through ...