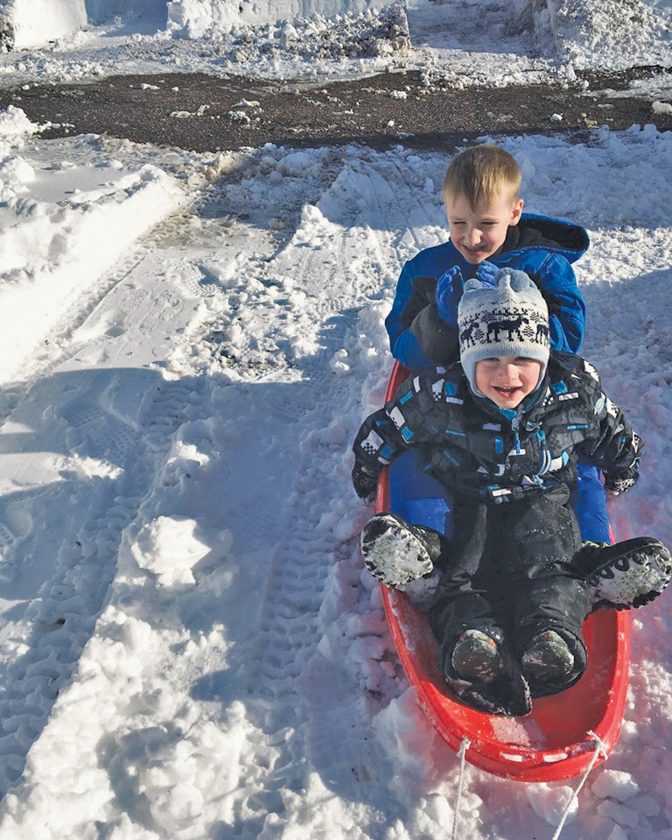 At left, Emil Wiig, 6, enjoys some outdoor time with his 3-year-old brother Waino. Emil, who has autism, is learning to adapt to major life changes brought by stay-at-home orders. Area school districts and organizations are working with families of children in special education programs by using video conferencing and other means of learning and communication. (Photo courtesy of Emmye Wiig)

MARQUETTE — Structure and a preset schedule.

Those are two elements of everyday life that have all but disappeared for many residents as Michigan approaches a full month of ‘social distancing’ and ‘stay home, stay safe’ measures.

Parents of children in Michigan’s K-12 education system are, no doubt, struggling with things such as child care, education and the inevitable boredom that comes with long gaps in social activity and no set schedule outside the house.

However, parents of children who have autism spectrum disorder or other developmental issues face an amplified version of that reality.

After working alongside subject matter experts, therapists and school personnel to create stability, it is especially hard for children who are served by special education programs — and their families — to adapt to the drastic change in routine.

He also has autism.

“Emil is mostly non-verbal which is our biggest hurdle,” Wiig said. “He attends therapies to work on communicating his thoughts and feelings with words, and he wears a tracking device on his ankle for safety.”

Prior to the stay-at-home order, it was not unusual to see all four members of the Wiig family out and about in the community.

“We’re usually very busy during the week juggling between activities such as school, therapy, playgroups, community theater, and visiting friends and family,” Wiig said. “This screeching halt in our schedule has been challenging. Just as other kids have cabin fever and have been climbing the walls, so has (Emil.)”

While Emil is starting to get used to his “new normal”, the family has noticed Emil is stimming — the repetition of physical movements, sounds, words, or moving objects –more frequently than before, Wiig said.

“Emil stims by clapping, yelling, screaming, banging blocks together, and running in a repetitive manner,” Wiig said. “We’re trying to keep him busy and find outlets for all the energy he has. We have a trampoline and bouncy horse in our living room that have gotten lots of extra use as of late. We all miss our friends, activities, and busy schedule, but our new normal is to stay put and to stay safe.”

During the course of a normal school day, Wiig said Emil received small-group, and one-on-one instruction from his teacher and aides in the resource room in addition to speech therapy, occupational therapy, and physical therapy at Lakeview Elementary School in Negaunee.

He would then leave the school an hour early to attend two hours of applied behavior analysis at the Behavioral Education Assessment and Research Center at Northern Michigan University.

“Emil is very loving and is particularly close with his teacher, some of his classmates and the technicians at BEAR,” Wiig said. “I can tell he really misses them.”

Older children, such as 15-year-old Marquette Senior High School freshman Marina Garlow, have also been adversely affected by the closure of school buildings and cessation of normal social activities.

Marina has been receiving specialized services via an independent education plan, or IEP, since she was in first grade, Noreika said. She receives a number of services at school to help “not only with her education, but also to help her see what is age-appropriate and socially acceptable.”

“At school, she has a one-on-one aide with her and modified assignments based on her ability to complete them,” Noreika said. “She also receives services from Pathways. There is a behavior team that comes into our home to help her with her behaviors and help her with what is acceptable and not acceptable.”

She said Marina’s special education teacher at MAPS has been in touch and is working with the family to come up with a game plan. Pathways, Norkeika noted, is closed for 30 days, but she said they have checked in with the family and have a case-worker available if the need arises.

The “new normal” of COVID-19 has been a big change for Marina, who lives at home with her 5-year-old sister and a 7-year-old brother.

“She does well with structure and a preset schedule,” Noreika said. “Marina has been in contact with many of her friends on the phone, so that has helped. But since she is not around others her age, she is acting younger than she has been for a while. She has a hard time with keeping her volume in check and behavior age-appropriate since she is now around younger children in the household.”

Both households have an almost daily struggle.

How do you explain social distancing to a child, especially one who relies so heavily on a structured routine?

“While I’m glad we’re staying home and doing our best to stay safe, it is frustrating that I can’t explain to him and his brother what is happening in the world,” Wiig said. “Before this, we were constantly on the go. Now when we go outside for a walk, Emil runs to our vehicle and tries to open the doors because he wants to go to the BEAR or grandma’s house. Emil does not use words to express his emotions so he screams and cries when we tell him we aren’t going anywhere. This is a lot for any young child to try to understand.”

Noreika said her daughter has become “obsessed” with the lockdowns and closures associated with COVID-19.

“Marina is also having a hard time with the thought of the school year … ending. She really does like going to school and enjoys seeing her peers. (She and her friends) are hoping to make plans when the stay-at-home order is lifted,” Noreika said. “The uncertainty associated with this is difficult for everyone but it is especially difficult for someone with the issues that Marina has. She will continually ask questions until she can receive an answer.”

Both Noreika and Wiig expressed gratitude for the services provided by the public school system, Pathways and the BEAR Center.

Emil began taking part in daily online ABA sessions with BEAR on Tuesday. He will have access to a Chromebook and efforts are underway to get him a specialized tablet that will help him communicate with others, Wiig said.

“We’re thankful Emil has so many people that love him,” Wiig said. “The teachers at Lakeview have posted videos reading books for the kids to watch. Emil’s class has a Facebook group and they post activity ideas, links to virtual activities, and updates. BEAR has called and is looking into the possibility of teleconferencing with our family to help with any difficulties we’ve been having. I feel like everyone cares and is trying to help.”

BEAR Clinic Supervisor Victoria Mattson said the facility — which provides multiple programs to assist children, adolescents, adults, and other agencies — has incorporated telepractice into its services in an effort to reach families while maintaining social distancing.

“We provide support for approximately 140 (plus) clients, and hope to continue to service our clients using telepractice in ways beneficial to their treatment. This will allow our clinicians to continue operating the center, in addition to remaining in contact with our student technicians,” Mattson said. “Both clients and technicians will benefit from receiving and providing telepractice by increasing access to quality behavior support, facilitating education and training, and improving family engagement in treatment outcomes.”

Concerns expressed by those who participate in the BEAR program include “daily difficulties of promoting engagement in learning activities, assisting their child through these activities while still managing work and chores in the home, and for their child to continue making progress outside of a normal routine.” Mattson said.

Wiig and Noreika seem to echo those concerns.

“We miss all the services (Emil) was getting and are hoping this time doesn’t regress his progress too much,” Wiig said. “I’m in several autism groups and regression is the thing most parents are experiencing and are concerned about during this time.”

While the school has been supportive, Noreika said she is concerned about the cumulative effect a prolonged interruption of in-person education and services could have on her daughter.

“I have a traumatic brain injury that I sustained 4 years ago. The effects of this also have made it difficult to allow me the ability to teach my children like I would like to. However, the schools have been helpful in sending links and codes associated with some online learning websites,” Noreika said. “Marina has been regressing a bit since she isn’t around her peers daily and so is now losing some of the advancements she has made recently in age-appropriate behavior.”

Each mother said good communication with educators and specialists is going to be the key to making education at home work for their children, along with a positive attitude about the situation.

“Marina’s special education teacher has reached out to me to check on how Marina has been doing through all this,” Noreika said. “Also, Pathways has been in contact with me to try and figure out a game plan for moving forward if the closures last longer.”

Wiig said her family has found many things to be grateful for during their prolonged down-time.

“It definitely gets overwhelming at times. I’m really trying to focus on the positive things that can come out of this time at home. Our boys have a very special bond. Emil … and his little brother, Waino is almost three. We also have an 18-year-old high school student who has been living with us for the past year named Dawson. Emil and Waino enjoy playing, singing, and dancing with him while we’re all home,” Wiig said. “I have been loving watching these bonds grow. We’re usually so busy that I haven’t had time to just observe and take that all in like I am right now.”